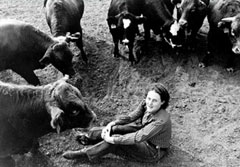 Stairway To Heaven is one of the most recent films by acclaimed US filmmaker Errol Morris, produced as one of an eleven-part series by Morris entitled First Person. Literally the films are stories about aspects of his subjects’ lives told directly to the camera, in the first person, by each subject. The series, in essence, reflects Morris’ claim that he is “very much interested – I guess it’s obvious – about how people see themselves…” (1) His characters reveal themselves through their interview.

Some characters featured in the series are a cryogenic expert who stole his dead mother’s head (I Dismember Mama) and a woman who while writing a book about her ex-lover’s serial killings, fell in love with another serial killer (The Killer Inside Me). It is in this context that Morris portrays Temple Grandin’s story about her autism and how it informs her design of slaughterhouses, the first and most famous of which is the ‘Stairway To Heaven’ in Texas, USA.

As if to immediately identify Temple Grandin as a subject worthy of the series, Morris allows Grandin to describe and explain early on in the film her extraordinary abilities of perception and empathy. Grandin’s exposition is not only indicative of the unique, bizarre nature of Morris’ documentary subjects but is also revealing of the confidence Morris has instilled in his subject.

Grandin meticulously explains manifestations of her autism, including hyper-acute senses and fear responses. She describes turning to science for answers, after finding through experimentation that putting herself in the cows’ squeeze-chute at her aunt’s ranch calmed her nerves, as if it was a “neurotransmitter readjustment”. Grandin then describes the association between the development of her own “Squeeze Machine”, her cow-empathy, and her current work.

Even within this shorter, seemingly hermetic, half-hour format, and with reference to the context of the First Person series, Morris manages to express the ideology and style evident throughout his filmography (including Fast, Cheap & Out of Control [1997] and Mr. Death: The Rise and Fall of Fred Leuchter Jr. [1999]).

Morris employs devices throughout Stairway To Heaven such as emotive music, intertitles, found footage, and dramatised sequences to punctuate the narrative and to emphasize Grandin’s own thoughts and words. For example, the original music (by Celeb Sampson, to which the film is dedicated), coupled with ambient extracts by Aphex Twin, underscore Stairway To Heaven with a bizarre disjointed ambience reflective of Grandin’s feelings of dislocation stemming from her autism.

In combination, these dramatic devices themselves comment on the role of documentary in depicting truth. For example, in the section headed ‘Diagnosed Autistic’, Grandin describes her autism as being like a pinball. Over her monologue we see beautiful slow-motion images of a pinball flung through its machine. This visual metaphor refers to Grandin’s thinking in pictures (her language) but also is a reminder of other incorporated footage. Grandin describes the cattle’s passage through her slaughterhouse systems as people moving on a pedestrian jet-ramp at the airport, an image of which is repeated throughout. We also see Grandin herself moving through her systems. She says “I can visualise myself in their body. What would it feel like pushing up against other cattle? What would seeing out of their eyes be like? . What would it be like if I actually was a cow?”

Although First Person does not investigate the subjects’ characters to the depths evident in Morris’ feature length work, he succeeds in exploring their mental landscape, or interior world using these dramatic, stylistic devices. In another scene Morris interviews Grandin while she is in her Squeeze Machine. As if to emphasize her point, Grandin is visibly calmer and her speaking pace slows down. This could also be seen as a reference to Mr Death, in which Morris interviewed Fred Leuchter in the electric chair he designed.

Most notably though, the interview style of Stairway To Heaven, as used in each First Person film, is distinguished by the use of Errol Morris’s Interratron device. The Interratron is a series of teleprompters which allow both Morris and his subject to maintain eye contact while looking directly down the lens. In this way the interviewee is speaking in the first person and appears to address the audience directly.

The Interratron interview technique, in which the first person replaces the third person as storyteller, epitomises Morris’s endeavour to uncover the mental landscape. “How people see themselves as revealed through how they use language. If you listen to what people say, that gives you a route into how they see themselves.” (2) For this reason Morris allows the audience to listen very closely by having long, slow-motion, unobtrusive images run under Grandin’s dialogue.

The intimacy created by the Interratron leads to almost a confessional situation in which subjects reveal themselves, and how they see themselves through their use of language. Morris is then careful to emphasize Grandin’s insistence that she thinks in pictures, not language. “I think in pictures. You know, pictures is my first language and English is my second.” This is the first statement made in the film and is implied to be Grandin’s main reason behind her empathy with cows. In effect, Morris asks Grandin to reveal herself in a language (English) that she is not as comfortable with. In doing so, the equalisation of power inherent in the Interratron (it’s ‘first person-ness’) is undermined.

However, to subvert this reversion to traditional and inherent power structures, Morris himself is at times heard directing and questioning Grandin. “Morris’ own screen persona – another significant feature of the new documentary – is suggestive of an inventive risk-taker who wishes to question the received wisdom of his artform.” (4) In this startling scene Morris directs Grandin into position so she may recite her friend’s poem about the ‘Stairway To Heaven’. We hear Morris directing Grandin and see her co-operate with Morris, demonstrating her trust and compliance. Grandin then recites the poem, aided by harsh, bright down-lighting which she looks up into, reminding us of god in heaven: “The Stairway To Heaven is dedicated to those people who desire to learn the meaning of life and not to fear death.” Over this sequence Morris plays a rendition of the famous Led Zepplin song of the same title.

Although Grandin describes the cows’ journey through her slaughterhouse system in detail, she fails to describe the end of the process when the cows are shot. Her emphasis is on the aspects of the design which keep cattle calm before their slaughter, for example the curved single-file routes and high solid walls (so cows “can only see their buddy in front of them”). Morris, at the request of Grandin, did not film any deaths. “As Temple tells her story, she takes the animal all the way up to the point of the bolt gun but not through the bolt gun and after that. It was that part of the story, her story, that I wanted to tell” (5). We are left with the impression that Grandin in her own mind does not consider this aspect of slaughter. She does not have a picture of it. Abstracting from this, Morris is saying that the extent to which a non-fiction film can identify reality is limited. Documentary films can tell the truth only up to a certain point.

By revealing Grandin’s ‘mental landscape’ Morris manages to present Temple Grandin’s story about herself without the audience knowing much else about her life. What we know is all that Morris has given us. Here again he is reclaiming the power of the filmmaker as storyteller, but at the same time through reflexive and dramatic devices mentioned above, is arguing against the truth of documentary reality, thereby documenting the limitations of verisimilitude (6).

Viewed as an entire series with Stairway To Heaven being one example, First Person can be interpreted as a development of ideas explored in films such as The Thin Blue Line (1988) and Mr Death (1999). Ultimately Morris questions the nature of the first person, from within the framework of reflexive documentary. He presents a truth, but one which raises as many questions as it does answers.