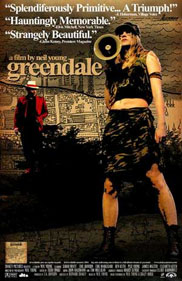 In the year-and-a-half since it premiered at the Toronto International Film Festival, Greendale has often been described as a “rock opera”. As a label, it doesn’t seem quite right. Authentic rock operas – think, Jesus Christ Superstar and its offspring – often call to mind images of bombast, pomposity and half-baked didacticism. In contrast, Greendale is a humble, funny and fully realised film that is by turns a poignant family drama, an environmental call to arms and a striking aural document of contemporary American life.

Greendale, a large portion of which comes to us by way of musician Neil Young’s hand-held 8mm camera, is set in a fictional California town of the same name. (Young also directed the picture; Shakey is a long-time nickname.) Played by a cast of unknowns, the Greens – it’s never quite clear if the family is descended from the founders of the imaginary burg – are a working class family trying to make their way in a world beset by tabloid media outlets, a bottom line mentality, and a presidential administration that tramples on civil liberties and environmental protections.

At the heart of the film are the tales of cousins Jed and Sun Green. Midway through the film a police officer stops Jed’s car, a vehicle that happens to be carrying a substantial amount of narcotics. Jed gets scared and shoots the cop – the splintering of the Green family, already under way due to subtle societal forces, is suddenly thrust into warp speed. The ensuing media frenzy results in another set of tragic circumstances. Observing the carnage is Sun, a bright-eyed, big-hearted young woman who has already begun to question authority in various thoughtful ways. Before long she evolves into what used to be called a radical.

It would be an exaggeration, perhaps, to suggest that Greendale is an exercise in experimental filmmaking. But neither is it a conventional American feature. There is no dialogue, per se; characters communicate with the audience and with one another by singing along with Young’s songs, or by acting out the drama at the heart of each of the songwriter’s musical narratives. The film is divided into 10 chapters, one for each of the songs that provide the film’s ever-present soundtrack. Between songs the camera pans over a hand-drawn map of Greendale, coming to a halt only when it has found the location – a home, a motel, a roadway – of the story’s next chapter.

If there is any doubt that Young’s film comes from a distinct political perspective, it’s dashed about 30 minutes in. Over images of then-Attorney General John Ashcroft and Tom Ridge, the Bush White House’s recently departed head of Homeland Security, Young indicts leaders who believe that suspending civil rights is the way to combat terrorism. “And we’ll be watching you/No matter what you do”, he tells the audience, inhabiting the persona of an Orwellian demagogue, “And you can do your part / By watching others too”.

The film also pledges allegiance to the environmental and anti-war movements, both of which have been reinvigorated in the U.S. since Bush’s election in 2000. Footage of ecological depravity – oil spills and refinery fires – turns up on several occasions, and the film’s closing set piece is devoted to preserving the natural world. In another scene Sun Green merges her love for the land with her hatred for bloodshed; by hand she etches a massive anti-war insignia into a beautiful, green knoll.

The scene in which Young gives the audience a look at the full scope of Sun’s hillside handiwork is easily the most visually arresting in a film rooted in realism. Not unlike his persona as a musician, Young is in many ways a workman-like director; he is much more interested in people than he is in, say, capturing breathtaking vistas. And yet he has very real strengths as a filmmaker, empathy foremost among them. Consider the chapter titled Carmichael, in which Jed Green shoots the highway patrolman. Given the film’s political bent, it would not be a surprise if the law enforcement officer – the embodiment of a system that bulldozes the underclass – were quickly forgotten. But Young recognises that the cop is also a man, a man with a wife, a man who had the respect of his peers. The director’s depiction of the officer’s memorial service – although not a single family member is present, his fellow officers rise in praise of the fallen Carmichael – is nothing if not compassionate.

Greendale is rarely touted as a funny movie, but in fact it has a wonderful sense of humour. Staunchly rooted in realism, the film occasionally gives itself over to the comically bizarre – Eric Johnson, the actor who plays Jed, turns up repeatedly as the “Devil”. How do we know he’s Satan? Well, he’s wearing a red sports coat, of course, and matching red dress shoes; he’s a Vaudevillian imp if ever there was one. Young, too, finds humour in his own persona. In the film’s first chapter, a character is seen mouthing the lyrics to one of the director’s songs: “Seems like that guy singin’ this song / Been doin’ it for a long time / Is there anything he knows / That he ain’t said?”

Perhaps most impressive is the extent to which Young has constructed his own parallel reality. To accompany the film he has created an extensive Green family tree, published a Greendale book, and devoted large portions of his live performances to the film’s songs. Though he is an accomplished musician, Young is still a relative neophyte when it comes to filmmaking. But with Greendale he’s made something that many directors spend a lifetime striving for – an authentic world all his own.