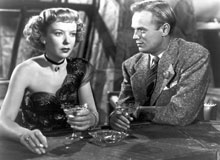 This is a bad script. Three directors have refused it. They don’t know what they’re doing, because basically it’s quite good. Remember those pictures we used to make at Warner Brothers, with Pat O’Brien and Jimmy Cagney, in which every time the action flagged we staged a fight and every time a man passed a girl she’d adjust her stocking or something, trying to be sexy? That’s the kind of picture we have to have with Road House. Now take it and do it like that. (1)

In 1947 Fox released the semi-documentaries Boomerang (Elia Kazan) and Call Northside 777 (Henry Hathaway). In 1947-48, Brute Force and The Naked City (both Jules Dassin) appeared; textbook moments in the naturalistic turn film noir had been taking since Double Indemnity (Billy Wilder, 1944). A characteristic of film noir in these immediate postwar years is its aspiration towards realism. The advanced camera and lens technology, fine-grain negatives, and climbing costs favoured location shooting. In 1946, Out of the Past (Jacques Tourneur, 1947) was shot at Lake Tahoe, Nevada and in Mexico City. In 1950, Panic in the Streets (Kazan) would be filmed entirely on the streets and waterfront of New Orleans. 1948 was also the year of the ‘Paramount consent decree’, which divested the studios of the chains of cinemas around the country and led to a drastic reduction in profits. Zanuck’s nostalgia seems apposite. Road House finished shooting on May 11, the same month as the Supreme Court handed down its decision.

Seen today, Road House inhabits disparate ages in American cinema. Lyle Wheeler’s art direction is a case in point. The road house itself has the generic look of the classical Hollywood set, archetypally American and occupying a dateless contemporaneity, a perennial ‘now’. The impression it gives is not of real space, but movie space. At the film’s climax, the action shifts to a lakeside, consisting of soundstage forest and painted sky, debased Romantic mise en scènewhich Hollywood made its own. Consonant with the hysterical tenor of this tale of unrequited love and peer rivalry, the artificiality evokes ersatz space in high 1940s Fritz Lang or Robert Siodmak, rather than the gathering natural light of Gun Crazy (Joseph H. Lewis, 1949) or The Asphalt Jungle (John Huston, 1950). The sets make the film look tired, belonging to an era in which Lang seemed to design narrative space despite his actors’ performances. Whilst his actors – Fonda, Bennett, Duryea – hailed from a prewar naturalistic school which encouraged social realism and produced Ida Lupino, the postwar period sees screen acting take a graphic turn. In Road House, Widmark’s psychotic Jefty recalls his colourful turn in Kiss of Death (Hathaway, 1947), of which Paul Kerr in Time Out wrote: “Late 1940s Fox saw several attempts to conceal the split in the gangster film between noir expressionism and ‘procedural’ authenticity.” (2) By this light, Road House becomes pivotal; Gothic, wayward, yet reaching out towards natural, ‘normal’ life. Paradoxical inasmuch as its extreme elements – arch settings, Widmark – simultaneously signal its antiquity and its modernity.

With its nodal structure and escalating violence, the plot of Road House feels as contrived as Zanuck’s preferred model. The film’s current status as a film noir is borne out in Joseph LaShelle’s moody interiors and some crackling dialogue: “She does more without a voice than anyone I ever heard.” But Lupino as Lily signals its prewar roots. Marking time in the 1930s, and making her mark from 1940, Lupino’s trademark tough/tender mien is key to the closing moments of depression gangsterism. In High Sierra (Raoul Walsh, 1941), Marie must call her lover down from his rocky sojourn whilst her instinct is to warn him off. That comment about Lily’s voice plays wistfully with the ‘voiceless’ Marie and evokes, perhaps, the ‘annihilation’ of the women’s performances here by the rhetoric of Widmark’s performance and the film’s expressionist space. Compare Lupino’s naturalistic acting style with Widmark’s as he foretells the Method and high 1950s melodrama. Singing ‘One for My Baby’ as her cigarettes burn grooves in the piano wood, Lupino closed her richest decade with Road House, relinquishing British nationality in 1948 to become an American citizen.

Hailed as the ‘Prince of Melodrama’ at a 1984 retrospective, director Negulesco’s oeuvre fits the mould, James Agee once describing him as “Michael Curtiz on toast.” (3) It seems appropriate to compare Negulesco with Curtiz whose forte was genre and whose heyday was at Warner Brothers in the 1930s. But Road House‘s hysterical register and overbearing men suggest a subversive undertow. In Jefty’s resentment towards former buddy Pete (Wilde) for courting Lily, we find a dispute between brutal and domesticated males common to postwar film noir. Arguably, the stylized look and gestures of Road House find aesthetics struggling to contain possibly homoerotic desire. Yet whilst all this goes on, the relationship between Lily and Susie (Holm), the cashier who secretly loves Pete, is gentler than we are used to in Hollywood accounts of female rivalry. At the end, we see Lily walking side-by-side with Pete as he carries Susie, shot and wounded by Jefty, along the road, the natural milieu suggesting progression to a settled future, and perhaps film noir‘s historical progression towards actual locations. Foreseeing sensitive accounts of women’s experiences directed by Lupino herself, the amity between Lily and Susie throws Jefty and Pete’s struggle into generic relief. The film’s allegiance to film noir can be felt in loaded relations between paranoid men. But at many another moment, Road House becomes a station between the way Zanuck made them in the old days, and the concrete logic of postwar film noir.