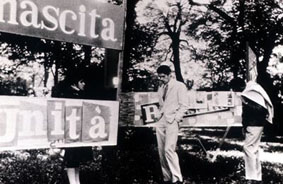 A precocious talent is always difficult to ignore. One is inevitably drawn into conflicting responses – envy, wonder, condescension; but mostly, there is the gushing excitement that only the discovery of a new artist or style can induce. In 1964, while still only 22, Bernardo Bertolucci released his second film, Prima della rivoluzione (Before the Revolution). Over the years critics and filmmakers have marvelled at how the Italian poet-turned-filmmaker produced something this bold and inventive at such a young age. Bertolucci has subsequently seasoned his craft with time, carved niches for himself, and seen a long and eventful career play itself into maturity. But in many senses, Before the Revolution is still his freshest film, an underrated beacon in the new European cinema of the early 1960s. Its style and ideological underpinnings might seem dated to many but the playful exuberance it displays has remained infectious, and the shattered idealism that Bertolucci is able to portray is as palpable and affective as ever.

The film steals its title from a remark made by the influential 18th century French diplomat Talleyrand; “He who did not live in the years before the revolution cannot understand what the sweetness of living is.” (1) Bertolucci himself grew up living in the years before (and through the course of) two so-called “revolutions”. The first was a revolution in the cinema of the 1960s, symbolised by the emergence of the nouvelle vague in France. Even though he spent his formative years as a filmmaker in the company of his fellow Italian Pier Paolo Pasolini (2), it seems difficult to imagine Bertolucci’s arrival without the precedence of figures like Resnais, Truffaut and Godard (3). Even at a glance, Before the Revolution is flauntingly avant-garde, enjoying the “giddy thrill of newfound moral and aesthetic freedom” (4). And while the Italians (unsurprisingly) didn’t care much for it, the French lovingly adopted the film and its director into their fold. In fact, Bertolucci’s most recent film, The Dreamers (2003), is an elegiac recollection of the deep impression that the culture of the nouvelle vague had on the youth of the time, perhaps most significantly as a prelude to the second major “revolution” of that period – the popular but short-lived insurrections of May ’68.

In Before the Revolution, Bertolucci uses a protagonist who shares his own background – a comfortably middle class upbringing in the Italian province of Parma. Fabrizio (Franceso Barilli) is an intensely idealistic young man, deeply engrossed in the radical Marxist politics being espoused at the time. Following the sudden death of his friend, Agostino (Allen Midgette), Fabrizio is thrown into despair about his life and future. He also falls into a passionate but somewhat illusory romance with Gina (Adriana Asti), his beautiful and nutty aunt from Milan. As their secret relationship rocks to and fro, Fabrizio’s inner ramblings continue to haunt him. He fails to understand the nature of love, and becomes disillusioned by what he perceives to be a lack of revolutionary commitment by the people, the Party and even his leftist mentor, Cesare (Morando Morandini). One day, they all chance upon Gina’s friend Puck (Cecrope Barilli), lamenting the ecological demise of his beloved River Po in this heartless age of modernity. At first Fabrizio ridicules this romantic trifle but recognises in Puck the inherent imperfections of his class, and his own “false sincerities”. He finds no other option but to surrender his revolutionary aspirations, quell his passions for Gina, and opt for an irreproachably bourgeois marriage to the pretty and pious young Clelia (Cristina Pariset).

If there is a single subject in the film, it is the existence and future of the individual within an ephemeral moment, and the future of that moment itself within a larger historical process. Bertolucci uses the conventional set-up – romance and revolution – but disguises it in a strikingly novel manner. It seems unfortunate that over the years, the critical dialogue on Before the Revolution seems to have overlooked (or at least undermined) the love story in the film. I assume that this is because it is a puzzling romance, doomed from the beginning and consistently fraught with doubt and disorder. But watching Gina and Fabrizio is like looking upon parallel rail-tracks from the window of a moving train – they come together, collide, move apart, and all at a speed that makes the spectacle hypnotic and their inevitable separation so abrupt. From the familial warmth of their first encounter, to the innocent gaiety as they shop in the streets of Parma and the painful solemnity of their separation at the opera house, their relationship morphs unpredictably from one state to another. Their utterances stretch from the intimate (“I exist because you exist”) to the banal (the endless talk of rain). Their first love-scene is as erotic as anything Bertolucci has subsequently fashioned, reaching a height of sensuality even as Fabrizio and Gina lie on separate beds (5). It is difficult to imagine the realisation of such a moment in the cinema of today, with the common perversity attached to acts of self-gratification. Sensibly, the film is also not completely devoid of a romantic idyll. In what could be considered the centrepiece of the film – a single 3-minute long take – Bertolucci’s camera circles Fabrizio’s living-room to almost magically transform a dull bourgeois conversation about eating, into a picture of the lovers dancing to an evocative song on the radio. The father exits, the grandmother is asleep, and we are left alone with a frame that closes in to reveal the geographies of mouths and necklines.

The most remarkable aspect in the presentation of this love affair however, is that the incestuous underpinnings that appear to be the most obvious reason for its termination are not necessarily suggested as being entirely responsible for its failure. Gina and Fabrizio are depicted as fundamentally different individuals. She idealises the present and would like nothing to move; “everything still like a picture with us in the middle, motionless”. She also questions the significance of time and the idea that the world has order that can be manipulated. For Fabrizio, time is everything – the key to historical progress and structure. His relationship with the present is more nostalgic because with every passing moment his future becomes his past. The relationship seems hopelessly self-destructive and both characters riddle themselves with guilt. Gina is prone to bouts of madness and cries out that every war, storm and fire is her fault. Fabrizio’s ideological preoccupations leave him cold, and he later admits that he wanted to fill Gina with vitality but gave her anguish instead. Finally, the lovers are never ready to confront the possibility that their affair is more than just a satisfaction of curiosities or a remedy for boredom. To use Gina’s allegory, “clouds pursue clouds”. She pursues him pursuing her.

The centrality of Fabrizio’s political “disarmament” in Before the Revolution has elicited several responses to Bertolucci’s intent in this film. Was he exploring the nature of his own political doubt? This seems likely in view of the proximity between Bertolucci and his protagonist, and he has claimed that the film served as an exorcism of his Marxist fears of being sucked back into the “milieu” (6). Some even suggest that the film prophesises the failure of the May ’68 uprising. In essence, not unlike the love story that runs parallel to it, the political narrative of Bertolucci’s film highlights the vagaries in following a nebulous idea. Fabrizio presents himself as a staunch Marxist; he sees activism as ennobling and a source for meaning (like poetry). But he is merely a pretender to the cause. He brandishes a bookish rhetoric but this is only to sound convincing. Towards the end he chokes while chanting a Marxist slogan. This is the realisation that he will never be the “new kind of man” that he believes in – one that is “wise enough to educate his parents”. So there is some irony in Bertolucci’s appropriation of Talleyrand’s remark. For Fabrizio there is little “sweetness” in this time “before the revolution”; it is filled instead with agony and despair.

There is enough about the aesthetics and style of Before the Revolution to fill an entire book so it seems ludicrous to even try and summarise it in one paragraph here. From the opening sequence – quick inter-cuts between close-ups of Fabrizio, shots of him moving through a crowd, and images of Parma captured from the air – it is evident that Bertolucci is intent on extending his medium to its fullest potential. Through the course of the film he seems to attempt almost everything that is possible within his means. He uses his lenses generously, persistently zooming in and out, and shifting focus. His camera pans, tracks, jerks, swivels, dollies here and there, scurries behind people, hovers over the River Po, and occasionally rests on the quiet of a tripod. His editing pattern is rarely seamless, audaciously playing with direction, angles and continuity, and often making one frame jump into the next. He uses light and exposure to great effect, contrasting the delicate expressionistic interplay between shadow and luminance in the more intimate scenes with the near-bleached overtones of some of the outdoor shots. The soundtrack is overlaid with dialogue and frequent voiceover, diegetic music, sporadic bursts of film score, and a careful use of silence. Amidst all of this there occur two striking moments of ellipsis – the first is an iris-in that encircles Fabrizio with a rose in his mouth, and the second an almost surreal insertion of colour frames as Gina observes Fabrizio through a camera obscura.

Is it surprising then that people criticise the film for being intangible? Bertolucci claims that at the time he sought out a cinema that did not engage the audience on an obvious sensual level. Like the directors of the nouvelle vague, he was keen to challenge the fascist model of the passive spectator exercised by popular cinema. This involved a deliberate distanciation of the audience through an unconventional employment of narrative and style. But there was always the fear of being ignored, of completely alienating the spectator to the point where the art became incomprehensible. Fortunately, in Before the Revolution, the amorphous structure of the film becomes inextricably linked to the ambiguities of the subject. A shapeless figure (the spectator) pursues a shapeless form with shapeless substance. 40 years after its release, Bertolucci’s film continues to demand that we suspend our traditional habits of viewing. It remains inconsumable in the conventional sense but it is hardly incoherent.

This annotation would be incomplete without a final word on the intertextuality of Before the Revolution. The film is rife with references (from Proust to Moby Dick, Roberto Rossellini to Marilyn Monroe) but I’d like to conclude by identifying two of the more significant ones, because of the manner in which they address the movie as a whole. The first of course is Stendhal’s Le Chartreuse de Parme – the novel on which the film is loosely based. Even if the connections between the two are tenuous, and Bertolucci lacked the much-touted worldliness of Stendhal, he is still able to borrow the novel’s jostling of love and ambition, romanticism and anti-romanticism, and the human capacity for self-deception. Both the novel and the film break rules left and right (and not always gracefully) but the depth and completeness of their moral universes is staggering. The other major point of reference in the film is Giuseppe Verdi, another revered artist-son of Parma. His version of Macbeth forms the backdrop to a pivotal scene at the end, where Fabrizio finally capitulates back into the bourgeois fold. But the allusion here is more allegorical. I see Bertolucci‘s film as an avant-garde opera – an emphatic and self-conscious piece on the impossibilities of love and the failed revolutionary idealism of the bourgeoisie. And if it is absurdly self-engrossed as some have accused it of being, well thank heavens for it. For it is in Before the Revolution that cinema (through Bertolucci) begins to enjoy itself again like a giddy child.