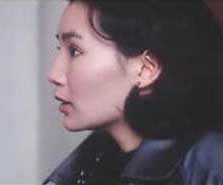 Well before his coming-out phase (which began in the early ’90s), Stanley Kwan was making rather more personal pictures than he might have realized: astute melodramas like Women, his debut feature from 1984 (now little seen if at all), Love Unto Waste (1986), Rouge (1988), and yes, Full Moon in New York (1989). These were pictures from his ‘repressed’ period (as Kwan himself might put it), borrowing the conceit of ‘women’s pictures’ to express his own personality and sexuality. “I certainly dealt with women in my previous films. Consciously or unconsciously, I projected the female sensibility onto the films, together with, of course, transformed gay sensibilities,” Kwan has said. (1) Having fully outed himself by the time of his TV documentary Yang and Yin: Gender in Chinese Cinema (1996), Kwan has embarked on a new cycle of highly personalized films (Hold You Tight, The Island Tales) and has done so seemingly as a reaction against his early cycle of melodramas. He professes to be embarrassed by Rouge, for example, and central to such embarrassment is his perception that he had indulged himself too much in his female characters. Citing Fleur (the Anita Mui character in Rouge) as a case study: “Whatever pain the character suffered, I also suffered, and whatever pain I suffered, I wanted Fleur to suffer too.” (2)

Full Moon in New York is wholly about suffering women; and I think I take Kwan’s point about indulgence after all – so much sufferance was inimical to the film. And again, Kwan has gone on the record as saying that “the film turned out to be an embarrassment.” (3) If Kwan isn’t careful – and judging by his last two efforts, he’s precariously on the edge – he may well turn out to be the director who has made the most embarrassments. Yet, in retrospect, Full Moon is not totally a stinker (particularly when compared with the director’s latter efforts), and it’s probably redeemed by the fact that it is a character study of women – a classic ‘women’s picture’ in short. Actually, Full Moon in New York is the director’s first full-fledged foray into the genre (while all his other pictures up to this point in his career had strong female characters, they were well balanced, so to speak, between the sexes).

Maggie Cheung, Sylvia Chang and Siqin Gaowa play three Chinese women in New York, each hailing from the three separate regions of ‘Greater China’ (Cheung from Hong Kong, Chang from Taiwan, and Siqin from the Mainland). Being Chinese strangers in the foreign moonscape that New York is, they become friends, meeting regularly in a Chinese restaurant run by Maggie, and occasionally getting drunk together, which is supposed to symbolize their somewhat lamentable lives. Maggie is a closeted lesbian who is sometimes stalked by another Hong Kong woman (Josephine Koo). She’s aggressive, but in a politically acceptable sort of way (when a man passes her on the street and sexually harasses her, disguising this as an accidental bump, she runs up to him and gives him a slap). As the woman from Taiwan, Sylvia is most like Maggie’s character – as an aspiring actress, she’s also aggressive but comes across as more smug and unsympathetic, perhaps because director Kwan can’t identify with her personality-sexuality the same way he can with Maggie. Still, like Maggie, she has her own secret in the closet – something about her father’s character that kindles her disillusionment about men in general (Kwanophiles might want to seize on this as having some biographical significance: the director has quite unabashedly spoken about his “desire and feelings” for his father while still a youth). (4)

Siqin as the Mainland woman is the most distant of the three as she’s the most introspective but too often, her character becomes coy, affecting seriousness that seems out of her depth so that there’s an air of frivolity about her situation (after having sex with her husband, she asks him, “Do I say ‘I came’ or ‘I went?'”). To be fair to Siqin, a superb actress, she’s given little support from the director and she does what she can within the limitations of the script. Given more time and tolerance, this is a character that could grow on the audience, and it’s not Siqin’s fault that she gives such a blushed performance. She’s basically wasted. How often does Kwan squander an actress when he can’t transmogrify the character with his own desires and personality? Think of Joan Chen in Red Rose, White Rose (1994), Chingmy Yau in Hold You Tight (1998), and Shu Qi in The Island Tales (1999). But for Full Moon, one can at least argue a defence. Kwan was given way too much to do. When he isn’t making melodrama, he’s making allegory.

With all three characters effectively acting as symbols of the different social natures of Chineseness, the film is really an allegory about China and its quest for political unity (with Hong Kong and Macao having been reabsorbed into the ‘motherland’ in 1997 and 1999 respectively, only Taiwan now remains as the last unsettled question). Social unity, as Kwan shows us, is far more easily achieved. The three women subsume their differences when they get together and all personal bitchiness is set aside for the sake of an abstract vision of China, which however, may mean more to the characters than to the director. Recognizing his inadequacies as an allegorist, Kwan says, “I am not one of those people with a strong sense of the destiny of the Chinese people. I don’t carry the burden of history on my back.” (5) Well said, Stanley. Yet, for all that, Full Moon in New York looks far more compelling today than do the recent films. Why did you have to come out?