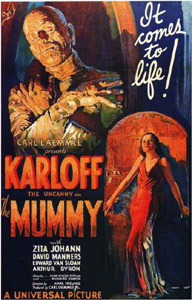 The Mummy began the third of the successful Universal horror franchises – predating the final franchise, The Wolf Man (1941), by almost a decade – and perfectly illustrates the almost incestuous nature of the ’30s horror cycle. Novice director Karl Freund is best known as the legendary German cinematographer who filmed many of F. W. Murnau’s films including Der Letzte Mann (1924), several of Fritz Lang’s films including Metropolis (1927), and E. A. Dupont’s Variety (1925). His moody chiaroscuro lighting, extreme camera angles and mastery of the moving camera gained him a reputation as a stylistic innovator. This brought him to America at the dawn of the sound era, where he shot Tod Browning’s Dracula (1931) and Robert Florey’s Murders in the Rue Morgue (1932) before embarking on The Mummy. Although Boris Karloff made his reputation with Frankenstein (1931) and further consolidated it with The Old Dark House (1932), The Mummy was his first starring role (after appearing in seventy films). Scriptwriter John L. Balderston was also not a newcomer to the horror genre, having written the original plays on which both Frankenstein and Dracula were based before scripting The Mummy. Later he was to script Freund’s other memorable directorial work, the delirious Mad Love (1935), and for James Whale he would script arguably the best of the Universal Horrors, James Whale’s The Bride of Frankenstein (1935).

Balderston’s earlier theatrical work informs The Mummy and it is remarkable how a number of the themes and ideas found in Dracula (the film, the book or the play), and to a lesser degree Frankenstein (the film version of which had already pilfered from Browning’s Dracula) reoccur in The Mummy. Similarly, The Mummy can be seen as a reworking of Dracula. Like Dracula, The Mummy‘s central plot device involves the battle for the control of the mind/soul/body of the central female character, the love interest, and like Dracula, the mummy is a revived, almost immortal being with occult powers that are weakened by religious icons. Both Count Dracula and the mummy have hypnotic powers capable of controlling humans and both have weak-willed followers who obey their commands. The ultimate goal is the sexual domination or submission of the female. The horror genre’s connection between sex and violence was established from the very beginning of the silent cinema, from the moment where The Devil conjures up a pretty girl in Méliès’ The Haunted Castle (1896).

Karl Freund’s The Mummy is of a very different species to the modern horror film. Freund’s film is built upon atmosphere with most of the horror being implied rather than graphically displayed. The most effective scene in the film is during the prologue when the mummy is accidentally revived by an inexperienced, but enthusiastic archeologist. The camera shows the heavily made-up yet recognisable features of Karloff. The archeologist chants quietly off-screen, completely immersed in his work, oblivious to the resurrection that is occurring on screen. Karloff slowly opens one eye, his body moving slightly, and the camera pans down his loosely bandaged body. The economical use of sound heightens the tension encapsulated in the scene. A mud-encrusted hand grasps a parchment from under the archeologist’s elbow and he turns, screaming as he sees the mummy off-screen. The camera slowly pans as the archeologist begins to laugh hysterically, and the audience captures a glimpse of bandage scraps being dragged out of the mummy’s crypt. The mummy’s coffin is again shown, now empty. This is the only sequence in the film in which Karloff is seen in the bandages associated with the character of the mummy. Thereafter Karloff ‘disguises’ himself as Ardet Bey an Egyptian archeologist who aids the British archeological expedition to further his own aims of resurrecting his beloved princess. Karloff’s baked-on, wrinkled make-up, combined with his emotionless features and controlled performance, creates the perfect illusion of a lifeless being brought back to a state of semi-consciousness.

The Mummy is nevertheless a B-movie. The other performances are inconsistent at best with the actor portraying the young archeologist driven to insanity, who in wildly overplaying his crucial scene undermines its impressiveness. The beginning of the film is littered with silly pseudo-Egyptological “mumbo-jumbo” (to borrow an expression from the film). The dialogue and its stilted delivery tends to inhibit momentum, but Freund’s restless, moody camera-work invigorates the early portions of the film. But one must recognise that this is not a modern horror film. Its pacing is much more deliberate. Where Stephen Sommer’s The Mummy (1999) is a fun, hyper-violent, hyper-action movie, rapidly edited, Freund’s The Mummy has a much more relaxed editing pace. Most shots show two or more characters in discussion, the camera frequently moving rather than relying on an edit. The patented television style shot/reverse-shot is rarely used here. Most single-character shots and close-ups are reserved for heightened effect or to underline a plot point.

But, this is a B-movie, and the recreation of Egypt is cursory. An obvious Hollywood Hills doubles for the excavation site, and the inserts of the pyramids and modern Cairo during the party scene are bizarre and disorientating. However, once the early exposition has established the struggle for the control of Zita Johann’s body (in a battle between good and evil), the film’s depiction of a household of ordinary Westerners pitted against the mystical powers of a solitary Egyptian builds a tension and excitement found in the best of the traditional Hollywood dramas. The skills and numbers of the besieged group are not sufficient to overcome this omnipotent being, and the woman of his desire is delivered into Bey’s grasp. It is only when his dreams begin to unravel that a rescue is implemented in the final moments of the film.