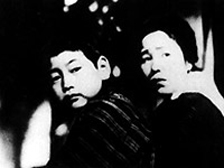 The Only Son was Ozu’s first sound film. In Japan, the industry in general was late to adopt sound. The benshi (oral commentators who accompanied screenings with their account of and commentary on the story) were extremely popular with the audience, thus powerful in economic terms. In his seminal study To the Distant Observer, Noël Burch argues that their commentary “removed the narrative burden from the images and eradicated even the possibility of the images producing a univalent, homogenous diegetic effect” typical of Western narrative cinema (1). He proposes the hypothesis that major directors such as Ozu and Mizoguchi

made use of the benshi and his distancing role during the formative period of their mature styles. They postponed coming to grips with sound until they felt capable of maintaining, in and through their mature styles, a “traditional” distance with respect to Western representationalism as reinforced by synchronous sound (2).

Narrative as such is not foreign to Japanese tradition; it is, on the contrary, omnipresent, but its modes are radically different from ours…in kabuki and the doll theatre the primary narrative dimension is isolated, set apart from the rest of the theatrical substance, designated as one function amongst others. In the West on the other hand, since the eighteenth century, our major narrative arts – the novel, the theatre and more recently the cinema – have tended towards a kind of narrative saturation; every element is aimed at conveying, at expressing, a narrative essence. Even in much of nineteenth-century opera, the musical text was regarded as an exteriorisation of inner states (feelings, unstated conflicts, memories, etc.) implicit in the libretto (3).

In performance, the music of an opera is analogous to the most emotionally compelling and poetic effects of narrative cinema, the effects embodied in gesture, movement, staging (including how the characters relate to each other spatially), tone of voice (and other paralinguistic accompaniments to the dialogue), the soundtrack, both effects and music. In the best of mainstream Western cinema, these strands of discourse intertwine in a mutually reinforcing representational system that is often most potent when operating on the spectator outside his or her conscious awareness. Conversely, “the semantic dissociation effected by the benshi” (4) is characteristic of the Japanese approach to narrative. Burch goes so far as to invoke the traditional Japanese doll theatre, with its “division of labour between presentational image and representational voice” to underpin his detailed and compelling analysis of the formal strategies of The Only Son, which he rates as Ozu’s “supreme achievement” (5).

For the spectator, perhaps the most immediately apparent examples of Ozu’s formal systemic are the repeated passages in which the narrative action is held visually and spatially in suspense, or at a distance. Sometimes, the protagonists are absent from the frame; on other occasions, composition and focus may be organised in such a way that they are indistinct, and certainly not the centre of attention. When I last saw Only Son, at the National Film Theatre in London, one such composition, coming immediately after a reel change, was so radical that members of the audience called out to the projectionist: “Focus!” In fact, the image was in perfect focus, but the centre of visual attention was not to be found where viewers were expecting to find it. Burch, “proposing a loose analogy… with classical Japanese poetry” has termed such structures “pillow-structures,” and the “cutaway still-lifes” that comprise them “pillow-shots.” (6) I personally find them extremely powerful emotionally; perhaps this is a result of a tension between their quotidian content and their lack of explicit human presence.

Other strategies which contribute to Ozu’s formal systemic include filming with “the camera unusually low” and “systematically placed at right angles to the back wall and in the centre of the rectangular ‘vault’ of the room or set. The characters are usually filmed head-on and in long shots. They generally occupy only the lower part of the frame when they are seated” (7); “180º cuts, in particular without change of shot size” (8); and a general disregard for the matching of screen direction and of eyelines. Burch regards the latter as “the most crucial” component of “the dominant Western editing system,” making “it possible to implicate the spectator in the eye contacts of the actors… to include him or her in the mental and ‘physical’ space of the diegesis.” (9)

Even before encountering Burch’s analysis (first in seminars I arranged at the Slade School, University College London) I was in no doubt that The Only Son is one of the greatest films ever made. Burch hardly engages with what we would now call the film’s sound design, and it is a sign of the cursory attention critics and historians grant to the aesthetics of sound that my research has yet to reveal who collaborated with Ozu to generate this wonderful track, with its anticipation of musique concrete (10). I would need to see the film again to offer anything approaching an effective analysis; suffice to say that it makes rich use of the similarity between the sound of Japanese musical instruments and the quotidian sounds of, particularly, the life of the mother who has worked so hard to give her son an education and chance of success.

Despite my agreement with Burch’s account of The Only Son, I have come to the conclusion, after decades of reflection, that I must resist his dismissal of Ozu’s films after There Was a Father (1942) as “the history of a gradual fossilisation” (11). It is true that neither Tokyo Story (1953) nor Floating Weeds (1959) displays so radical and foregrounded a formal systemic, and that thus both lack the disruption between story and presentation that is one of the most beautiful features of the earlier film. Nevertheless, I seem too eclectic in my appreciation of beauty in the cinema to be convinced that acknowledging the significance of rejecting an “imaginary space” into which the spectator may be inserted requires me to reject the beauties found in Ozu’s later work. (12)

Tadao Sato, “From the Art of Yasujiro Ozu”, Wide Angle vol. 1, no. 4, 1977, pp 44–48. This article discusses Ozu’s style of filmmaking and how it relates to Japanese culture. During an international conference of film schools in Tokyo in 1974, I remember our hosts showing us a student film in which there was a consistent failure to match screen direction. If anything, this added to the film’s impact. We also toured the NHK television production studio, and noticed that sets were typically constructed on platforms some feet above the floor, thus making low-angle shots easy to set up.

Tadao Sato, “Le point de regard”, Cahiers du cinéma no. 310, April 1980, pp 4–10. This article considers the Japanese custom of avoiding direct gaze when conversing, and how this is used in the films of Ozu. Burch reproduces Sato Tadao’s account of how, following a demonstration by his editor of the difference between “correct” and “incorrect” eyeline matches, Ozu commented: “there is no difference”, and went on shooting reverse angles in dialogue scenes his way! (See Burch, 1979, p. 159.)