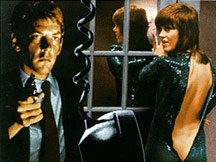 Klute is a great example of the 1970’s American detective thriller. An interesting hybrid of film noir, it pits hardboiled cynicism against warm romanticism. Its three main characters project their frustrations and insecurities onto their surrounding environment as they succumb to the pressure of trying to keep their secreted desires in check. The triangular relationship between its detective (Donald Sutherland), femme fatal (Jane Fonda) and psychopathic criminal (Charles Cioffi) is so intriguing that the question ‘who is this film about?’ really does not matter. Rather, as in all good thrillers, the crimes and its characters become a convenient means to explore contemporary social issues.

Close to Klute‘s time of release, there were many critics, who whilst acknowledging the sexy thriller’s debt to film noir, appeared distracted by the femme fatal figure – the semi-retired prostitute Bree Daniels. With her smart mouth and love-’em-and-leave-’em attitude, the character of Bree was deemed the epitome of the thoroughly modern woman (that is independent and feminist), a moniker no doubt loaned extra weight by the newly reincarnated, braless, post-Vadim Fonda resplendent in her ‘Hanoi Jane’ coiffure. Indeed critics like Diane Giddis called upon women to disregard the film’s generic noir conventions, and reclaim it on the basis of its sexual politics alone.

Such blatant promotion of Fonda-as-totem for the feminist cause however, led to some pretty spurious claims. As a result of wishfully claiming Bree as the film’s central protagonist, Giddis for example, declared that, “Klute is told from a highly subjective viewpoint, and the other characters, while ‘real’, can be seen as projections of the heroine’s psyche.” (1) While the audience is most certainly privy to Bree’s interiority, the film refuses to lend itself to this reading precisely because its narrative, aesthetic and three main characters are so indebted to film noir. As Christine Gledhill contends, the re-appropriation of noir conventions in Klute has a significant structuring role that place constraints on the female image. (2) Yet I would argue that the film equally constrains the image of its males, and in this way Klute can be read as an updated exploration of ‘male’ paranoia about women. For on the one hand, Klute does seem to be concerned with ascertaining ‘what the woman wants’ by explicitly demonstrating the essential nature of female (sexual) difference through the Bree character. (3) But its championing the feminist cause via the Fonda-as-Bree star vehicle cannot help but simultaneously reveal the noir generic preoccupation with masculine paranoia. In other words, the film’s problematic, neurotic rendition of femininity cannot help but render an equally charged study of threatened masculinity.

Evidence to support this reading occurs most brilliantly in the instances of ‘disturbance’ or disjunction between the sound and image tracks. The audience obtains most of their information about Bree and her ‘story’ via two aural flashback-style devices; her therapy sessions and the recurrent use of her voice on audiotape coaxing a ‘john’ to ‘perform’ on a past job. At the same time, the visuals work to undermine Bree’s confessions as truthful testimony, placing her in a more psychologically submissive position. For instance, although Bree’s therapist is female, her sessions are shot in an interview style, the camera’s spatially oppositional placement, the child’s drawing behind her head, and her often semi-hysterical justifications of her actions all connote her as being an object of interrogation, as someone occupying less power and knowledge. The mini tape recorder is also connoted as patriarchal in that it is a ‘modern’ device is used to gather ‘evidence’ and provide ‘meaning’, and operated by a male. Time and time again, Bree’s pre-recorded voice is placed strategically throughout the film so that it becomes a talisman of domestic unrest. Consider the opening credit sequence after Tom’s fidelity to his wife (and by extension his male friends) is revealed, and the closing of the film with its ambiguously happy ending where Bree is seen leaving with Klute, but the voiceover tells us that she thinking otherwise.

Consequently, the audience is more aligned with the generic (read ‘patriarchal’) perspective in that they are prevented from ever fully trusting her. Alan J. Pakula’s portrayal of Bree recalls the predominant myth of ‘woman’ as one of the ultimate storyteller, tease and keeper of hidden agendas. This is in stark contrast to the comparatively silent sleuthing ‘male’s, who are treated in Pakula’s rendition as (sexually) frustrated, cheated chumps.

This is also demonstrated in the way that Pakula consistently associates the film’s authoritative but problematic vision with its two male characters. These distortions occur in part due to their infatuation with Bree, but also because all successful sleuthing demands a neat fitting story. Thus, the introductory images of Peter Cable as friend and foe are little more than virtual reflections distorted in glass windows. John Klute is shown metaphorically as an outsider. He never seems to ‘fit in’ to his surroundings (an observation supported by Bree who calls him a ‘square’). As in the opening scene where Tom’s disappearance and possible infidelity to his wife is established, he appears awkward and gangly pinned behind the Gruneman’s dining table, like a kid who has outgrown their three-wheeler bike. Later, as he seems to be gaining more power over Bree, he is shown sitting in a rocking chair with her, childlike at his feet. Finally, as if to ram home his point, Pakula thrusts his characters amongst the predominant geometric lines of stair wells, sky lights, elevator shafts, mesh fencing and other props, which combined with oblique camera angles and dark shadows, contribute to signify an insurmountable gap between ‘male’ and ‘female’. As narrative stories, each character fails to become rendered as an irrefutable proof. Thus, by consistently aligning the film’s ‘true’ story with the visual fantasy of the voyeur, Klute renders everyone, including the audience, as fair game.