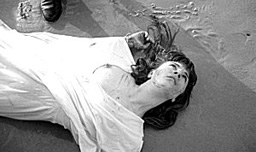 The summer of ’68 saw mass mayhem and generalised freakings-out in loads of cities across the Northern Hemisphere and probably beyond – Prague, Chicago, London – but the riots of May in Paris have long been regarded as the sexiest and most photogenic. These are the ones that the avant-garde groups would like to hang their manifestos off. It’s widely considered that the Situationist International had a hand in instigating the action-packed events of those brief, sweltering weeks all those years back. But is it really realistic to invest such power into the hands of half-a-dozen contrary and self-consciously obscure radical philosophers? For who now remembers the contemporaneous occupation of the LSE? 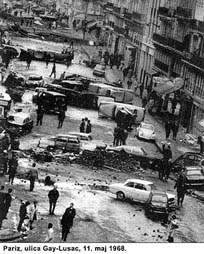 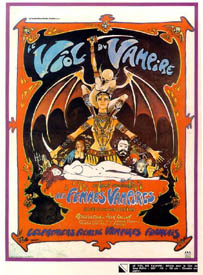 It was May. It was Paris. It was 1968. You could fuck off if you wasn’t there. I wasn’t there but I can fuck off anyway. The radio was playing Les Equals, Demis Roussos, Françoise Hardy, Sam and Dave, Sylvie Vartan, and many many more all interspersed with news bulletins and on-the-spot riot sounds. We call them “feeds” these days, but back then they were just noises. Eager for relief from the rolling newsflashes on TV, thousands flocked to the cinemas but distribution was paralysed by industrial action and only two new films opened in Paris during the period of unrest. One of them was Jean Rollin’s Le Viol du Vampire (The Rape of the Vampire) (1967) which premiered at La Scarlet on the Boulevard de Clichy, taking over the screen from Ed Wood’s Orgy of the Dead (1965). Rollin was able to get his film out since he was controlling virtually everything himself. He’d originally financed the film, and made it specifically for a close circle of friends who were devotees of Feuillade’s Les Vampires (1915) and Gaston Leroux’s more lurid work. Of course, Rollin spiced it all up with foxy naked chicks and lashings of blood that he wouldn’t have got away with if the film had been in colour, which it wasn’t since he couldn’t afford it. In fact, the film had originally been only 40 minutes long, much too short for a commercial release, but it was so top-notch that Rollin soon found a mate to lend him the cash to bring it up to feature length. But rather than just lengthening the work he tacked on a separate second part as a kind of built-in sequel. It even had its own credits and a different title which meant the film looked like a double bill on the poster. Maybe that’s what pissed off the punters so much…or maybe it was something else. Whatever it was, the audience flipped and trashed the joint.

There are some obvious refutations to the courageous hypothesis that the riots of May 1968 were triggered by the premiere of Rollin’s film: 1) most of the viewers of the film didn’t riot, 2) most of the rioters hadn’t seen the film, and 3) the film didn’t open until after the riots had started. Taking these points in order:

1) This objection is obviously spurious. Most of the population of Paris didn’t riot either. Rioters are generally defined as those that do riot. 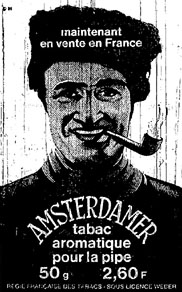 2) It is ridiculous to suppose that the rioters were driven by one common factor. Politically, for instance, rioters were drawn from all extremes of the spectrum, although the weight of numbers is generally credited to the Left. Nevertheless, there is documentary evidence of disturbances at screenings of Rollin’s film, proving conclusively that the film contributed in some measure to the general unrest. The chaotic nature of riots may lend disproportionate amplification to a particular element. The news media usually refer to these elements, meaninglessly, as “outside agitators” without specifying what they are outside of and how the agitation is achieved. Given how seriously the French are held to take their cinema, it seems to me quite unlikely that disgruntled filmgoers did not take an active part in the violence. And those Frogs stay plenty pissed off for ages!

3) The laws governing cause and effect with respect to time occupy a worthy place in the textbooks of physical science. Let us praise them whilst recognising that they have no relevance to the love of great art.

We shall pause here to note the esteemed pedigree of “direct action” in the French dramatic tradition. In 1901 riots erupted at the premiere of Alfred Jarry’s Ubu Roi at Theatre de l’Oeuvre. Shitrrr! Poor old Ubu barely got out the first word before being shouted down. The dramatic potential of this kind of incident wasn’t lost on uberDadaist Tristan Tzara who maintained the ultimate surrealist act would consist of shooting a loaded revolver into the audience. No accident then that a nascent Surrealist group showed up at the 1926 opening of Raymond Roussel’s The Dust of Suns to defend the playwright. And across the English Channel, half a century later, four foul-mouthed yobs made a nation choke on its cornflakes. It seems inconceivable that they were motivated by French avant-garde art theory…and yet…isn’t that a revolver in Sid’s hand?

Listen… listen… Listen to me. You know who I am. Even though your eyes no longer see. Listen to me and obey. You must be careful, you and your sisters. Your misfortunes will begin again if you do not do as I say. There are strangers whose arrival will be your ruin. . Three of them… Each of them will set out to destroy you. Most dangerous is the one who says he wants to cure you. He will steal your soul if you listen to his lying words. If you speak to him he will steal your eternal nature. Listen to me. Whatever he does or says, do not listen to him…

A manifesto, apparently. The audience seems to be solicited to identify with the strangers, potential adversaries of the vampires. But this identification will be short-lived. This is not a dialogue-heavy film, and what there is seems inspired by (or shares a common origin with) the Situationist writing of the time. Consider:

Death to all who persecute us!

You spend the day in a state of catalepsy. That is why you are exhausted.

…but who can you trust to find out the truth? They don’t consciously lie. It’s become a habit. They’ve surrounded the sisters with crosses. To combat their illness, we must fight those who created it.

With most powerful eyes we see the statue thus destroyed. The mystery pierced. The temple profaned. The clamour of a vanquished people.

After some aerial shots of a blind chick playing (impossibly phallic) skittles in garden and on beach, we get four foxes in the same room. In a Rollin flick you can bet that one if them is gonna get naked soon – if they aren’t already! Disrobing upon meeting is a convention in the Lesbian Vampire film, later appropriated by pornography to the point where it has become a genre-signifying cliche. There’s loads more weird vampire action before the first part of the film draws to a close with a couple kissing on the balustrade of the besieged chateau reminiscent of the famous photo of the couple on the barricades at R. Gay-Lussac.

An apparent fantasy of the subjection of De Gaulle opens the second part of the film as the elderly ex-monologist is humiliated and killed. When the Queen of the Vampires says: “Because of this incompetent we must begin again…” does she refer to the narrative events unfolding onscreen, to the film itself, or to the overthrow of the Republic?

Antiquated firearms notwithstanding, the only modern elements in the film are cars, and images of these are self-consciously jarring: a cassocked and cowled monk driving a convertible; a coffin loaded from a hearse into an ambulance (reversing the usual chronology), a nude woman reclining in the back seat of another convertible, her attendants perched behind her on the haunches of the car. But all of these seem natural to the characters. It is the viewer’s unfamiliarity with the film’s logic that renders the images strange. And this unfamiliarity is our basic humanity, for after all, nothing seems odd to a vampire.

By now it has become clear that, rather than elaborating on the first part, the second part of the film attempts to recuperate by deconstructing its components. Embellishment is added only where it subverts the original context. Thus the arrival of the Queen of the Vampires contributes nothing to our understanding of the motivation of the characters in the first part. 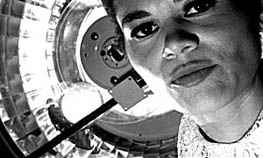 The Queen of the Vampires (played by Jacqueline Sieger) is the only non-Causasian actor in the film. She appears to be of African descent, which in itself is anomalous since popular culture teaches us that Africa is a country of zombies not vampires. It is tempting to speculate whether a tentative analogy can be made between the catalyst provided to the film by the African fox and the influence of Algerian activists in the actualised riots.

The Mob is ignorant of the postulated disease that causes the vampirism and attribute its symptoms to the vampirism of folklore. The various factions: vampires, investigators, mad doctors and revolting peasants fight amongst themselves. It is impossible to assess who represents the reactionary element. All characters are driven by disease, desire, or blackmail. These drives are interchangeable, and the characters intersect and transmute into one another, preventing the audience from identification with (and of) the characters. In this way the film can reject recuperation.

A tape recorder wired to a phallus and enormous bell jars. That’s all… 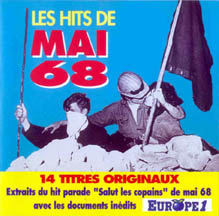 The psychic hunger for reconciliation through bloodshed is amplified by riot sounds (and sporadic disassociated gunfire) that erupts as rabbles storm the stage in both frames of reference. William Burroughs’ Electronic Revolution gives detailed instructions for the provocation of these kinds of direct action via projectors and tape recorders.

By the end of the film, pretty much everyone (on-screen) has died at least once. Inexplicably transported to central Paris, the resurrected psychoanalyst picks up the dead Cordelia and dances down the street towards the Place de la Bastille. They are making for the Colonne de Juillet, a bronze column built in the 1830s to commemorate the memory of the victims of the Three Glorious Days of the Revolution that overthrew the French monarchy in 1830. At the inauguration of the column (in 1840), the bodies of the martyrs of the revolution were transferred to a crypt beneath the statue. The presence of the metaphor is obvious to the rioting cinemagoers, but its significance cannot be apprehended.

Invigorated by image, word, and sound of riot, adrenaline, and whatever else they’d smuggled into the cinema, the Mob spill out of Le Scarlet into the night of the XVIII Arrondissement. They are confronted with the myriad possibilities of revolution and there they falter. There is no director to yell cut, since the crew of the film have usurped the equivalent role of the vampire-directors in the theatre. Alienated, the Mob grow weary and quarrelsome. No-one can agree on a concept for an end to the picture they’d started so impulsively, let alone a scenario to improvise, or even a line of dialogue. It’s obvious the picture’s going nowhere. The budget dried up weeks ago and there were no completion bonds for those kinds of movies back in the ’60s. 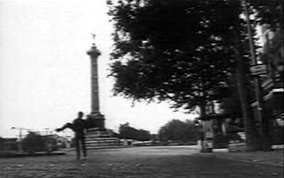 Decades later, the multinational image-banks have tried to saturate the market, but succeeded only in creating an ever more voracious hunger for images. The demand can never be satisfied, but it may be temporarily mitigated by consumption of ever-proliferating margins. Given enough time, the most ill-considered, underbudgeted and unfinished revolution will eventually be remastered for DVD with a director’s commentary and bonus material. Ooh…motion menus…