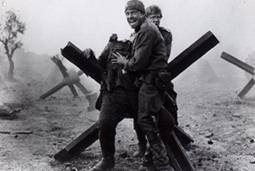 It’s all an accident, an accident of hands. Mine, others, all without mind, from one extreme to another, but neither works nor will ever. Yet we stand here in the middle of no man’s land.

It is 1943 and the German army, ravaged, depleted, demoralised, is hastily retreating from the Russian front. At dawn, in the midst of a clearing, a German soldier, Sergeant Steiner (James Coburn), stands facing a Russian soldier boy. With golden straw-like hair and angelic face, the boy’s presence is a reality of war and a symbol of lost innocence, of missed and missing families. But his presence is also anathema to the chaotic, barbaric and absurd actualities of war. Having saved the boy from execution, having fed and clothed him, Steiner now releases him. Before they part, Steiner tries to explain that in war, although on opposite sides, he and the boy have suffered the same fate; they are caught in the “middle of no man’s land.” A slight smile alights across the boy’s face as he turns and begins to make his way through the leafy trees-towards home. Steiner watches him until, with well-trained eyes, he picks up the shadowy figures of enemy soldiers amongst the trees. The boy makes a run for it and bursts through a clearing only to be shot down by his own side. An anguished animal cry erupts from Steiner as he staggers, defeated by pain and helpless rage-it’s all an “accident of hands”.

When Orson Welles first saw Sam Peckinpah’s Cross of Iron (1977) he cabled Peckinpah that it was the best anti-war film he had ever seen about the “ordinary enlisted man”. (2) Although Peckinpah’s earlier film Major Dundee (1965) deals with some of the ramifications of the US Civil War, Cross of Iron establishes its story firmly in the front line of war, depicting its horrors and the psychological damage it inflicts on its participants. Made in Yugoslavia on a low budget, (3) this sombre and claustrophobic film deals with a German reconnaissance platoon involved in the retreat from the Russian front. A commercial failure in America, it was released in Europe in the spring of 1977 to rave reviews. In Germany it was awarded a Bambi and, ironically, it became the biggest grossing film in Germany and Austria since The Sound of Music (Robert Wise, 1965).

Amongst the mud, slaughter and wreckage, against the endless, harsh, bone-shattering explosions and flashing lights, Steiner attempts to protect the men under his command. Like many of Peckinpah’s protagonists, Steiner is an independent and anarchic character who detests all forms of authority. Although a highly decorated Sergeant, who somehow always manages to cheat death, he detests the uniform he wears and everything it stands for. His nemesis appears in the figure of the oily-haired and pink-cheeked Captain Stransky (Maximillian Schell). A wealthy aristocratic Prussian, Stransky has volunteered for the front with the express aim of winning the “Iron Cross” (awarded to German soldiers for extreme bravery). An increasing animosity develops between the two men with Stransky eventually taking murderous actions. Under his command, Steiner’s platoon is abandoned behind enemy lines, where almost all of them eventually perish.

In some ways, the film’s narrative is of peripheral importance. What it does is mark out situations where psychological dramas and emotive actions can be explored. Even in the context of Peckinpah’s oeuvre this is a film of extreme actions and moments. We see the horrific scars and amputations of wounded soldiers, vehicles drive over dead bodies, silent orgiastic killings take place, anonymous figures are blown to smithereens, and soldiers are shot by their own sides. In this film Peckinpah returns to the explosive sequences of violence that we find in The Wild Bunch (1969); however, he is less concerned with the ecstatic function of violence and more meditative about the characters who participate in its action and whose fates often seem inevitable. A strange complexity and lyricism infuses sequences in which he delves into the function of war and the reasons why men join armies and fight, while surreal, dream-like sequences explore the psychological damage inflicted on these men.

However, in Cross of Iron, as with most of Peckinpah’s films, there is a dual pulse beating. Amongst the destruction, betrayal and violence we also find a humanising love, sensuality and sweetness. Stransky bullies and manipulates a young orderly into confessing that his Captain is homosexual. Stransky then uses this information to blackmail the Captain under threat of banishment and hanging. In Steiner’s bunker, amidst the stench and dirt, his men comfort each other-touch, fondle and hug. Wearing an apron, the group’s scavenger and cook greets a new recruit by blowing him a kiss. The unshaven and scruffy Kruger (Klaus Lowitsch) literally kisses away the rising hysteria in a fellow soldier. The platoon cares for the enemy soldier boy, they have a birthday party, bake a cake, drink, sing and laugh. However, for all the sweetness and dignity that Peckinpah affords Steiner and his soldiers, he appears incapable of viewing female soldiers in the same light. Steiner and his men come across a group of female Russian Soldiers. These women are portrayed as incapable of fair combat, they resort to using their sexuality to trick and cajole Steiner’s men. The misogyny of this sequence is palpable as the female soldiers are ultimately portrayed as a pack of dogs circling helpless prey. Yet women, children, and the notion of home haunt this world of men. While injured in hospital Steiner has an affair with his nurse Eva (Senta Berger). She offers him the possibility of something better-sensuality, beauty and a home. Kruger refuses to wash in the belief that dirt and natural body oils will keep him waterproof. While trying to find their way back through enemy lines, Steiner turns to find a young recruit jumping over shafts of light. The recruit explains that it’s a “child’s game”; “it’s bad luck to stand on sunshine”. If he misses the beams they might just all get through all right. Superstitions and childish games act as talismans-charms against death.

Cross of Iron is an anti-war film in that it focuses on the average foot soldier, the harshness of his daily existence, and the horrors inflicted on him by war. These men dream about survival, peace, sex and home. Yet Steiner, like many of Peckinpah’s male protagonists, is unwilling or incapable of being open to other ways of existing. He no longer knows where home is or where his children are; he hates the war but is fearful of what he will be without it. Dead to a world of other possibilities, what he chooses is to feel alive in the ecstatic moment of freedom achieved through the confrontation with violence and death.