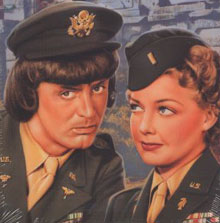 It is difficult to adequately situate I Was a Male Bride within any of the accepted interpretative frameworks that are utilised to help understand and categorise the poly-generic work of Howard Hawks. On the surface it appears to be most obviously understandable or containable within the domain of Hawks’ comedies, particularly those which star Cary Grant. It is also true that the film shares many of the qualities, themes and fascinations of Bringing Up Baby (1938), His Girl Friday (1940) and Monkey Business (1952); films which are all concerned with the battle between and confusion of the sexes. In this respect I Was a Male Bride is closest to Bringing Up Baby in that it emphasises the command and prowess of its female characters, and focuses on the relentless humiliation of its ‘marginalised’ male ‘protagonists’ (one French, the other an emasculated palaeontologist). Nevertheless, I Was a Male War Bride is generally a less frenetic work, coloured by the drabness of its surroundings (post-war Europe) and the comically nightmarish bureaucracy (military, civic and inter-personal) that is its chief subject – a bureaucracy that is all about confinement caused by laws, regulations, genders and bodies. It is the final of these elements that most closely links I Was a Male War Bride to the rest of Hawks cinema.

Though they routinely rely upon dense structures of repetition and clusters of connected themes, words and images, Hawks’ films are generally at their best when essaying a little gesture, expression or detail of observation. These aspects are brought into sharp relief by being ‘contained’ within a world that is defined by Hawks’ masterly deployment of genre and his command of the forms of classical Hollywood cinema (think of the back-to-back songs performed almost out of nowhere by Ricky Nelson, Dean Martin and Walter Brennan in Rio Bravo [1958]). Stylistically, I Was a Male Bride is dominated by a stream of mid-shots and highly motivated camera movements, and is confined by the generic restraints of the uncomfortable comedy of humiliation (this is a film that is explicitly about sexual frustration). This conventional framework of genre and style enables Hawks to focus on such aspects as the often contorted body of Grant, the gravelly voice of a bit player, or the chance comedy that emerges from an element of mise en scène or the way that bodies cluster and combine in the frame. Though formally controlled, there is often a sense of airiness in Hawks’ films, an element of spontaneity that is made possible by the general control of performance, camera and composition. Many of the intimate scenes between Sheridan and Grant in I Was a Male War Bride feel both contrived and genuinely intuitive, providing a synecdoche for the broader workings of Hawks’ cinema.

I Was a Male Bride sets up a generally less dense and populated world than is common in Hawks’ comedies. The breathless activity and dialogue of Hawks’ other works in this genre, where words, phrases, objects, and even bodies, dovetail into one another, sometimes drifting off into oblivion, is only vaguely hinted at in this film. Words are often played with in the film, and the comedy often emerges from a repeated phrase, an indecipherable acronym, or the ineffectiveness of verbal communication. The comedy of the film also relies upon the frustration of its characters and their inability to decipher the verbal, visual, graphic and sexual symbols which surround them (and, basically, to have sex).

Much has been written about the speed of Hawks’ cinema, a machinery of modernity that Henri Langlois defines in relation to his obsession with action, overlapping dialogue, bodies in motion and the technologies of velocity, especially aviation. (1) Rather than merely reiterate this laudable attempt to champion the forward thinking modernity buried in Hawks’ classicism, I would argue that his films are often a remarkable mixture of movement and stasis, forward motion and eternal return. Thus, Hawks is far removed from the generally out-of-control velocity and combustive movement – both internal and external – that defines the work of Preston Sturges (and sometimes the dialogue, pace and idiosyncratically descriptive character names of both can fool one into overemphasising their similarity). (2) The contradictory nature of the Hawksian ‘world’ is a key to I Was a Male War Bride, its movement across Europe, from village to village, bed to bed is marked by a series of repeated situations and motifs – many of which overstate Grant’s confinement; in a bathtub, chair, sidecar or woman’s army uniform.

I Was a Male War Bride is the first of Hawks’ comedies that is not confined by the hermetic world of the Hollywood studio. And although there is a density of signification present in the film, this is amongst the sparest and most minimalist of Hawks’ films (pre-empting the pared-back style and content of his later work). Despite the occasional slapstick touches (Grant caught straddling a railway gate, fumbling in Sheridan’s room while unsuccessfully trying to open the door), the film is far removed from the gaudiness and burlesque of Gentlemen Prefer Blondes (1953) – both featuring scenes in which characters are required to don, and perhaps parody, the marks of femininity. In contrast, I Was a Male War Bride can be viewed within the context of the increased ‘realism’ of the post-war American cinema (in its use of locations, ‘natural’ lighting, its highlighting of the role of working women). But it also continually undercuts this realism, most famously in the casting of Grant in the role of French officer, Henri Rochard. The film makes no real effort to construct Rochard’s nationality; the main markers of his French character given not by an accent (which is ‘French’ simply because it is not American) but by the emblematic use of clothing, his name and incessant feminisation (characteristic of how Hawks used Grant in other films such as Only Angels Have Wings [1939] and Bringing Up Baby). (3) Although he wears what is supposedly a French uniform, his caricatured Frenchness is symbolised most clearly by the elegant leather gloves that he wears (which we are to assume no American man would ever wear). In fact, Hawks uses clothes, and Grant’s ill-fitting body within them, to caricature nationality, class and gender throughout. In this sense, the film can be considered as a kind of burlesque in which Grant is ‘stripped’ of his not quite ‘suitable’ identity. The film can also be viewed as a deconstruction (and reiteration) of Grant’s screen persona.

The film’s final scene provides a summation of much of what has come before, returning us to the themes of confinement, nationality, sexual difference and reversal. The key difference demonstrated in this scene is that Grant takes control, his confinement with Sheridan in a ship’s cabin instigated by the key he flings through an open portal. One can read many things into these final images, particularly when the looming presence of the Statue of Liberty is shown leering into the portal (a phallic symbol perhaps, but also a French gift to America symbolising freedom). The fact that the statue is of a woman, and that Grant only finds ‘freedom’ through confinement, only reiterates the complex deconstruction of terms, identities and nationalities that the film has played out.