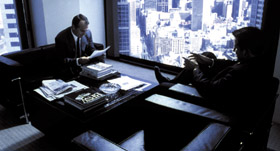 O’Reilly: “We’ve now entered the age of corporate feudalism and we are the new princes.”

Jim: “If we could predict the next stock market crash the suffering that could be avoided would be huge!”

O’Reilly: “The shareholders are our people, they are our society. The public can look after itself.”

Chaos Theory as applied to the Stock Market would have to be the least probable plot device for an Australian film. Let’s hope the pitch (‘Public Enemy Number One: The Banks’) for The Bank (Robert Connolly, 2001) grabs the punters because it would be a pity if this quietly rewarding thriller missed its audience. Connolly’s debut feature uses the notion of chaos mathematics as its plot motor – a delightful fancy which makes a superficially rather cold story about financial institutions, stock market crashes and the wreckage left in their wake much more than the sum of its parts.

Connolly has made the move from producer to director with ease and style. He reveals his background as a theatre director in the effective low-key acting style that distinguishes The Bank. The disturbing quality of The Boys (Rowan Woods, 1998), which Connolly produced, and the rather off-handed plot turns of All Men are Liars (Gerald Lee, 1997), which he associate produced, are also evident in his first feature. Certainly The Boys seems to share the same broad social concerns with The Bank, primarily that society operates only for the benefit of the big players, and watching The Bank it becomes clear that a deep sense of disillusion with economic rationalism and Big Bad Bank Behaviour is an informing principle for (co-screenwriter) Robert Connolly. David Wenham, who plays Jim -the central character in The Bank -, brings to the role the same faintly creepy screen persona which he delivered in his performance as Brett in The Boys. In addition, The Bank‘s spare visual style is reminiscent of Connolly’s AFTRS short Mr Ikegami’s Flight (1996), which also featured a sense of the city as a modern steel and glass playground for ‘elite’ dreams. It also featured an outstandingly restrained performance by Kazuhiro Muroyama who plays Jim’s hacker buddy in The Bank.

One of the compelling things about The Bank is its refusal to allow the audience to engage too closely with the key characters (just like the bank’s relationship with its customers as Michelle [Sibylla Budd] observes at one point). Jim is remote and impenetrable. His opponent and apparent ally, the self-confessed “big swinging dick”, Simon O’Reilly (Anthony La Paglia) is coldly corrupt, though with some nicely cultivated frissons of macho attractiveness. The rest of the cast, most sadly of all the effortlessly stylish Budd as the love interest, remain ciphers in this chess game of a movie. In fact, the love interest narrative thread between Jim and Michelle seems rather wilted in the scheme of things. The energy of the relationship weakens fast and the whole deal ends up as sort of beside the point as Jim exits centre stage. And so The Bank becomes very much a solo flight by Jim’s character.

The Case of the Superfluous Subplots

This throwing away of genuinely interesting parallel plot possibilities is nowhere more apparent than in the case of the subplot about the little Aussie battlers (played by Steve Rodgers and Mandy Mcelhinney). The notion of a family first idly victimised and then practically destroyed by the bank is theoretically just fine. The fact that (in a somewhat offhand way) their child is accidentally killed/drowned/written out after a visit by the bank’s writ server, adds a real edge to the family’s plight and a sense of desperation and even – for a moment, rage – to the film’s internal mechanics.

However, this at times touching sidecar about two Aussie battlers and their doomed kid done down by the bank, which deserves a separate film itself, never really connects with the action taking place on centre stage – Jim’s trajectory towards the heart of matters: the day of the predicted Stock Market Crash. In the end, this subplot becomes a mere plot device when the out-of-control avenging husband (Rodgers) bails up O’Reilly at the climacteric. It works in dumb plotting terms but at least brings a sense of fate to the final events of the film. Perhaps Connolly, taking an angel’s eye view, had decided that we are all indeed flies to the wanton gods of Hollywood plot structure.

But all this brings into play David Wenham’s notoriously enigmatic and ironical screen persona (The 2000 Archibald prize winning portrait by Adam Cullen was of David Wenham the social being, never the onscreen package). The rather laidback and somewhat disingenuous personal style that made Diver Dan such a success in Sea Change (ABC TV, 2000) and the long anticipated return of whom may well have swelled the hopeful ranks of the viewers, is precisely what keeps The Bank from becoming merely an occasion for a lot of whizzbang computer graphics. Something indescribable is happening out there in Connolly’s airbrushed, intentionally glossy Finance World theme park that is Centabank, but Wenham’s screen presence keeps things interesting throughout.

Though we never get close enough to Jim (flashbacks aside) to really care why he’s up to something, in general a suspension of disbelief is aided by Wenham’s ability to keep us guessing as to some half-glimpsed emotional core that in the wash up (particularly in the last scene at the international air terminal) seems still as inaccessible as in his very first scene, which may well be as much a function of the script as performance. We can never pin Jim down – nor can anyone in the movie – but that’s part, if not nearly all, of the fun.

The Hills are Alive with the Sounds of Melbourne

This way of seeing the Centabank universe as a kind of post-modernist fever dream, all reflective glass and European Economic Union blue is part of the distancing ‘look’ of Connolly’s vision. This is a world inhabited and run by computer software, where corridors hum silently and the characters are dressed by Armani, colour keyed to the air conditioned elegance. Cars glide along post-modern Melbourne bridgescapes (mainly Jeff Kennett’s tollways – is this part of the message? It must be). Elevators hum, humans are reflected in mirrors and doors. Connolly’s camera keeps its distance, even the love making is gliding, angled, glass-distorted.

Tristan Milani, who shot The Boys for Rowan Woods and recently the edgy inner city Angst (2000) for Daniel Nettheim, has done close to his best work here, though this time his camera style offers a strong graphic frame for the characters – the montage work featuring crisp images of a glass and steel Melbourne sometimes looks like a modernist City Symphony (perhaps early Walter Ruttman?). Overall, Milani creates a palpable sense of a metropolis of smoke and mirrors to echo Jim’s arcane scheme to bring down Centabank.

The screen music, too, has dreamy and hypnotic qualities to mirror the cinematography. A brilliant, seamless soundtrack, by Alan John, owing much to Philip Glass, keeps things minimalist. Even the occasional choir effects glide along like Glass’ The Photographer, producing one of the better and more unified tracks of the recent past. Again, this post-modernism fits the gliding cinematography by Milani, adding to the pervading sense of unease and of lives seen through armour glass.

The irresistible lure of psychologisation should have incapacitated the screenplay from the start. It certainly has the feel of a script editorial intervention. The need to ‘explain’ Jim’s character with a back-story of rural disasters in the past seems to be struggling to give a simple explanation for Jim’s actions. Such familiar devices as flashbacks to a rural tragedy could so easily have seemed desperately clunky but in The Bank the very distance given by the pro filmic restraint helps make this familiar device (not least in Hollywood ‘psychological’ thrillers) also work better than it has any right to. But the movie could have done without it. That said there’s little otherwise that is excessive in this trim and spare piece of emotionally and visually restrained filmmaking.

Indeed elegance is the last thing you might have expected from the opening shots of the film. These conform exactly to Graeme Turner’s observations on the recurrent use of long dusty landscape establishing shots in ’70s movies: Sunday Too Far Away (Hannam, 1975) is Turner’s exemplar (1).

Long tracking aerials and pans along the washed-out Victorian western outback seem to be about to set up yet another road to nowhere – if not to Nhill. But the witty narrative set-up of the first scene showing a rural school class infatuated by the claptrap and free home savings boxes offered by the local bank manager sometime in those very ’70s (were they the last years of grace for rural, or indeed any, banks?) serve to link the outback Aussie childhood underpinnings of the story with its metropolitan themes and glacial screen look.

Perhaps it was the very focus on Jim and his slowly apparent and deadly intent that renders the love subplot effectively redundant. Because our attention is so drawn to worry away at what exactly this louche ‘genius’ might be really up to that the affair with Michelle seems curiously muffled. Her later decision to play detective with Jim’s smoothly fudged past seems both arbitrary and, in terms of his cold persona, at least doomed and at best irrelevant to whatever the main game will turn out to be in terms of the Big Bang that Jim by, halfway through the movie, is clearly angling to pull off. A pity, because a more plausible relationship and more sharply delineated motives for Michelle would have given the film more of the double edged sword that makes such a guilty pleasure of The Thomas Crown Affair (the first one, Norman Jewison, 1968, not the silly remake).

Of course, if you want more human complexities in your movies, then this essay might constitute a product alert. In the final accounting, The Bank will cause you no existential grief. Connolly’s world here is a fascinating but ultra disengaged universe. This is a movie that will fascinate some but not involve too many. Let’s hope that those who, like Jim (and in the Press Kit, Robert Conolly himself), are fired by that simple credo “I just hate banks” – along with anyone who enjoys achieving in the dark of the cinema a Zen-like state of contemplation – can get to see this little dark star of a movie. Their deepest feelings about banks, whatever they may be, will be rewarded by a good double strength shot of Schadenfreude. The final scene, featuring that rather underused team from the subplot and a deserted country bank is riveting. At last you’ll get to see a bank hit an overdraft straight from some economic rationalist hell.