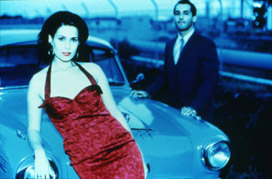 If the word multicultural has been effectively banished from political debate in recent years, it remains well represented on Australian screens. Over the last decade or so, there have been a steady stream of feature films that with varying degrees of conviction and complexity have explored issues of ethnicity and multiculturalism. Films that come to mind include Ana Kokkino’s Only the Brave (1996) and Head On (1999), Monica Pellizzari’s Fistful of Flies (1996), and more recently Russian Doll (Stavros Kazantzidis, 2000) and Wog Boy (Nick Giannopolous, 2000). Ranging across a variety of genres and deploying everything from broad slapstick to extreme pathos, many of these films draw significantly on their filmmakers’ personal experiences as the children of migrant parents, growing up in post-war Australia.

The new Australian film La Spagnola (2001) is yet another contribution to this multiculturally inflected collection. The feature directorial debut for actor Steve Jacobs, La Spagnola was written by Jacob’s wife Anna-Maria Monticelli and “draws from her own experience and memories as a ’60s immigrant child”. (1) As the title indicates, the central character is a Spanish woman, Lola (Lola Marcelli), and the majority of the dialogue is delivered in languages other than English. (2) The dramas in Lola’s personal life are played out against the backdrop of stark cultural differences between a socially and geographically isolated Spanish family and suburban Australian society of the 1960s.

The film opens in dramatic fashion with a portentous dust storm followed by scenes of a marriage breakup. Lola’s husband, Ricardo (Simon Palomares), leaves the aggravated chaos of the family home for the relative sanity of life with his Australian mistress, Wendy (Helen Thomson). Lola’s desperate and often ludic attempts to exact revenge on Ricardo and Wendy provide the central narrative impetus. Lola’s teenage daughter, Lucia (Alice Ansara), bears the brunt of her mother’s erratic behaviour and registers a wide-eyed, often dissenting perspective on events.

La Spagnola is problematic on a number of levels. Firstly and most significantly, the main characters in the film, with the exception of Lucia, are underdeveloped and unconvincing. As the central protagonist, Lola is a two dimensional character who never moves beyond the crude stereotype she presents in the opening scenes of the film. The epitome of Spanish hot-headedness, Lola is charming and irritating in equal parts. By the films’ denouement, and despite a series of life changing events, she remains intractably the same: a superficial amalgam of grand Latino passions and puerile obsessions. The supporting cast, including Spanish and other ethnic characters, are for the most part similarly limited. Lola’s relatives and friends including husband Ricardo, sister Manola (Lourdes Bartolome) and Greek lover Stefano (Alex Dimitriades) embody various aspects of the passionate Mediterranean stereotype. Manola in particular is a familiar and tired incarnation of the bawdy, irrepressible and meddlesome older female relative.

La Spagnola‘s broader attempt to explore issues of cultural difference is equally oversimplified, where difference is explored almost exclusively through the device of contrasting Lola with ‘the Australian’, Wendy. The passionate, dark-haired ‘Spanish Woman’ is thus an obvious counterpoint to the self-satisfied, smugly blonde Aussie ‘sheila’. The latter’s comfortable suburban lifestyle is contrasted with Lola’s impoverished existence in a timber shack marooned in a strangely stylised industrial landscape. Where cooking is a primal passion with Lola, the perfectly manicured Wendy refuses to get her hands dirty in the kitchen. Food in fact develops into a central, if overly reductive motif for cultural difference in La Spagnola. Following Ricardo’s untimely demise, the increasingly paranoid Lola suspects that Wendy’s indifferent culinary skills and the shortcomings of a 1960s Australian whitebread diet are ultimately responsible for his death.

The character limitations in La Spagnola are reinforced by the film’s unsettling tone. Described as a “comedic drama”, the film is an awkward attempt to combine black comedy with family psychodrama. (3) La Spagnola fluctuates wildly between scenes of melodramatic intensity and exaggerated farce. Harrowing scenarios of abandonment, violence or attempted abortion are quickly succeeded by broadly comic moments, allowing the audience little respite from either register. This top-heavy combination is overlaid with a vaguely surreal aesthetic, further muddying the waters.

According to Jacobs, in La Spagnola “the mundane and the supernatural on occasion…collide”. (4) Interiors and exteriors are thus given a highly stylised treatment which the director has described as a “quirky naturalness”. (5) Rather than offering an environment “without distraction”, the contrived nature of the production design tends to distance rather than engage the audience from the central drama. (6) While clearly mining Almodóvar territory, La Spagnola bears something of the overheated quality and distinctive aesthetic of the Spanish director’s work but none of the sophistication.

The disparity in the level of performances in La Spagnola reinforces the uneven tone of the film. Marcelli and Bartolome, two prominent Spanish actors, embrace the Almodóvar elements of the film with gusto. Other cast members adopt a more naturalistic approach, particularly noticeable in the performance of Alice Ansara. The latter brings some genuine pathos to the role of the conflicted teenage daughter of the feckless and self-absorbed Lola. Ansara’s character, Lucia, in fact provides the most potentially interesting element in the film, primarily with respect to her affiliation with an earlier, similarly disaffected young screen heroine of multicultural extraction.

If La Spagnola suggests links with Almodóvar, the film has equally strong connections with Monica Pellizzari’s Fistful of Flies (1996). Pellizzari has described her debut feature as a “black comedy with a surrealist edge and underlying serious themes, the tone somewhere between Once Were Warriors and Muriel’s Wedding“. (7) It is a description that could apply equally well to La Spagnola, which like Flies features a rebellious teenage heroine, struggling with tyrannical parents and negotiating the tensions between a multicultural family background and life in the broader Australian community. And both locate the main action in a peculiarly stylised family home, isolated in an equally contrived semi-rural landscape. Both films also focus on unconventional heroines, wilful adolescents and troubled older women and above all, the complexities of the mother-daughter relationship.

But where Pellizzari’s film offers some real insight into distaff oppression and generational conflict in a multicultural setting, the central female characters in La Spagnola are never compelling enough to encourage either identification or understanding. The rapprochement between mother and daughter in Flies is genuinely moving but the détente affected between Lola and Lucia is unconvincing. While clearly an ambitious and heartfelt project, and a laudable attempt to represent a multicultural community relatively neglected on the Australian screen, La Spagnola is ultimately a disappointingly uneven viewing experience.