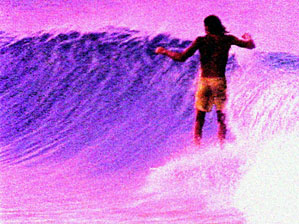 The surf movie genre has its roots in the mid-1960s when surfing as a sport and lifestyle spread through coastal communities around the beaches of Hawaii, California and the eastern coast of Australia. The early surf movies found an audience in young surfers who would gather in coastal town church halls and local community function rooms across the nation to watch their surfing heroes do their stuff on the “big” screen. At these events, spontaneous outbursts of hooting and hollering filled the various auditoria with euphoria and delirious abandonment.

By the early 1970s Australian youth was stretching its wings and “evolution” was everywhere – politically, socially, sexually, and within surf culture. In surfing a raw energy was seen, a dynamic movement that completely broke the mould of “fat ass”, “cuppa-tea” traditional board-riding. This transformative moment became known as the short board evolution – new, lighter, more manoeuvrable surfboards that were used to much greater effect. These boards allowed top-to-bottom mobility; they got surfers deeper into the aqua tube and allowed steeper take-offs and tighter, more extreme and dynamic turns on the waves.

Shot in 1971, Morning of the Earth reveals the pioneering spirit of a new breed of Australian surfer who took the short board to an innovative and radical new level. Nat Young, Chris Brock, Baddy Treloar, Michael Peterson and Terry Fitzgerald defined their generation as this particular sport’s elite – young men who lived for nothing else but surfing, dedicated, sea-riding knights. This group, a beautiful-looking, calm-natured generation of surfers, were totally tuned into their natural environment with an almost pastoral, idyllic zeal: contemplative, relaxed and peaceful. Within this sub-cultural strand, there was an emphasis on personal freedom, nomadic “questing”, a romantic connection to the elements, and hedonism. Alby Falzon’s film explores these surfers in their natural, “back to the earth”, soulful world. They possessed all the skills to dominate the sport internationally but would rather “soul-surf”, devotees of a calming, communal lifestyle.

Falzon learnt his craft as a photographer in the Australian Army before working for Australian Surfing World Magazine in the mid-1960s. Producer Bob Evans sent him to Hawaii to make a film before he returned to Australia and decided to make his own film. Falzon, himself, a super-fit, laid-back “surf-addict”, shot the film on the northern coast of New South Wales where Australia’s greatest surfers lived. The opening imagery of a sunrise shot with infra-red photography establishes the film’s use of a variety of optical effects, including lap dissolves and slow-motion filming, lyrically extended in the printing techniques it deploys. The movie’s mise-en-scène is distinguished by its fluidity, achieved by using an optical printer to repeat frames as many as five times, thus slowing, or “stretching” the action by as much as 500% and enabling minute variations in wave-riding to be examined in almost timeless, “eternity-in-a-frozen-instant” detail. This range of visual effects results in a spectacular representation of what it means, or, more precisely, how it feels, to catch, shoot, and carve a wave.

The music is similarly evocative, and music producer G. Wayne Thomas’ award-winning soundtrack remains a classic of its genre. Featuring some of the best Australian musicians of the early 1970s, Thomas’ own three compositions contribute considerably to the film’s overall effect, alongside works by Brian Cadd, Terry Hannagan and John J. Francis. Laid-back instrumental folk songs unwind like an early morning drive along the beach highway with friends, surfboards and not a care in the world. The music enhances the harmonious union of man and nature, the adventure implicit in riding waves where a sense of total freedom is experienced far, far away from civilisation’s compromises and complexities.

Made with the assistance of a loan of $20,000 from the newly established Australian Film Development Corporation, Morning of the Earth represents the emergent proto-hippie-New-Age, “soul-surfing” lifestyle in a colour-saturated, “psychedelic” manner that resonates with the content; that is, in ways which emphasise the fusion of avant-garde and documentary techniques characteristic of the discourse of ecstasy and delirium. While replicating the travelogue “surfari” form of a number of other surf films (such as Bruce Brown’s Endless Summer [1966] and David Elfick’s Crystal Voyager [1972]), Morning of the Earth replaces voiceover with a music soundtrack that fuses and integrate its episodic “narrative”. Falzon’s film explores a number of themes prominent in underground film (drop-out sub-cultures, eco-hipdom, indulgence in soft drugs) incorporating multiple innovations in form and content, and setting a whole new benchmark for documentary surf movies.

Falzon employs beautifully crystal-clear cinematography as he records surfing sequences in Australia, Indonesia and Hawaii. Kuta Beach was the location for the first images of Indonesia ever seen in a surf movie. The film also discovered the magnificent left-hander surf break, Ulluwatu, where waves of eight-to-ten-feet fall over a razor-sharp coral reef. In years to come, Ulluwatu’s vulnerable, spiritual perfection would be pressured by international tourism and surfing circles.

Today the film remains the most influential of all Australian surfmovies and a gauge of quality for the large number of current surf moviemakers who film the world’s best riders in exotic locales across the globe. Apart from its superb camerawork, what distinguishes Morning of the Earth is that “flow” which seems to emanate organically from its editing rhythms, and which is enhanced by the liquidity of the music score. All these formal aspects merge to produce the sounds and images of a quintessential body-and-head-trip we could call: “Surfin’ Down Under”.