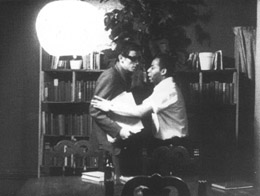 The heart of this issue is the John Cassavetes spotlight. The range of voices, thoughts and approaches to discussing his films’ unique style and legacy in this issue and in a related dossier in Canadian film journal Cinema Scope, testifies to the strong passion and interest in Cassavetes’ cinema today and to the fact that there remains much work to be done in fully grasping its complexity and depth. A common theme across many of the pieces is that of ’emotion’ as an impulse that runs through, even informs, this oeuvre. Not merely emotion in a sentimental sense, seen as one aspect of life that must occasionally be vented, but emotional and nervous energy, fear and danger, love and hate as intensities that are always defining action and behaviour, an irreducible and inescapable constant of life. For many, Cassavetes’ cinema is an antidote to the emotionally starved reality of cinema today precisely because it lays bare, brings the viewer into such close and immediate proximity with depths of emotion. As Christos Tsiolkas expresses in this issue: “.finally someone had communicated something that I had not dared speak. That being a man means knowing gutlessness better than knowing courage, that failure stays with you long after success.” Tsiolkas’ piece also raises the intriguing notion of how the American dream operates in Cassavetes’ cinema, a notion encapsulated in the director’s deep reverence for Capra. There is an undeniable feeling in Cassavetes’ cinema that any distance between an objective, outside position occupied by say the ‘director’ and the unfolding action and drama of the film is absolutely annihilated, opening up a new creative space beyond that of the ‘objective’ and ‘subjective’ polarities of cinema, and Gilberto Perez in this issue fleshes out binaries of art-life and fiction-documentary, imperfection, and performance that Cassavetes’ films raise. The collapse of objective/subjective, art/life is a notion that has been described by Kent Jones, in relation to Cassavetes, as an understanding of direction belonging to a contemporary generation of cinephiles: “For us, direction is a matter of engagement with the life of the film – not life as captured by film but the living matter created by the meeting of camera, reality and splicer”. The importance of form in Cassavetes’ cinema and the precise, unique marriage and transformation of “human questions . what it is to be and maintain a couple, a family, a community, an individual-in-society into, at the same time, urgent questions of representation” is eloquently discussed by Adrian Martin in his keynote essay on Cassavetes in this issue. And so Cassavetes’ cinema remains not only a body of work to constantly plunge for a rekindling of a sense of the intensity, urgency, and vitality of what it means to be human but also a reaffirmation of the unique depths and figural potentialities of cinema, the latter of which are discussed by Nicole Brenez in this issue, a long-time writer and thinker on Cassavetes, whose work translated here is part of a larger project on figural methodologies in cinema. Explorations of formal properties of Cassavetes’ cinema continues in Effie Rassos’ essay, which considers the peculiar structure of temporality his films give rise to, and which she describes as “distended and affective, much like the everyday”. Whilst Jodi Brooks, positioning Opening Night as a contemporary variant of the “ageing actress” films of the ’40s and ’50s, explores the character’s complex struggle in this film with discourses of performance, ageing, and temporality, resolving her dilemma only through adopting a crisis, shock-like mode. From a single film to an oeuvre: Maximilian Le Cain looks at the evolution of themes in Cassavetes’ cinema, from group portraits to individual analyses, shot through with questions of identity. So is Cassavetes’ cinema a phenomenon specific to a unique set of historical circumstances and sensibilities (post-Hollywood America in the ’70s and ’80s), and is it a cinema that is still possible today? Perhaps the final word of this spotlight rests with Martin’s proclamation, made after tracing the director’s legacy and influence on contemporary cinema, that scholarship on Cassavetes to come confronts the challenge of re-seeing the films via a historical perspective, through locating Cassavetes within the stream of history and “social forces and genres”.

Also in this issue is a dossier on French Cinema, encompassing a major essay on René Clair as an “author and legislator” of the cinema to a discussion by Eric Rohmer on his latest film to Fergus Daly’s heartfelt reflection on film criticism and Philippe Garrel. Analysis of recent Australian and overseas cinema releases are on offer again in this issue as well as reports from recent, major Australian film festivals: the Melbourne and Brisbane International Film Festivals. Included in the former dossier is a thoroughly engaging and insightful interview by Tom Ryan with the intelligent, articulate and talented Errol Morris, which shouldn’t be missed. And Andrew J. Horton provides invaluable insight into an important and developing European film festival, the 36th Karlovy Vary International Film Festival.

I would like to thank all the writers of this issue, and the following people whose generosity, support and assistance is greatly appreciated: Jared Rapfogel, Mary Stephen, Hilary A. Radner, Bill Routt, Brad Stevens, Adrian Martin, Fergus Daly, Noël Herpe, Albert Fung, Grant McDonald and Mairead Phillips.

Finally, this issue is dedicated to the many lives that were recently lost in the tragic and horrific events that shook America, and to all victims of ideological, racial, religious and political war.