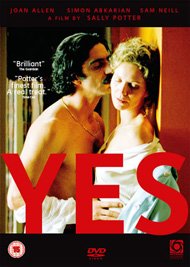 Longing to believe that in a world fractured by strife there is some bigger picture that eludes understanding, Yes is endlessly about what you cannot see. Each scene, word, look and cut in Sally Potter’s film is implicated in its neighbour’s life, just as in this moment of being everything is related to everything else, even to the dirt beneath our feet.

She (Joan Allen) is a molecular biologist growing apart from her politician husband, Anthony (Sam Neill). They live in a well-appointed London flat kept almost spotless by a maid (Shirley Henderson), whose surreptitious asides to camera – “Dirt doesn’t go. It just gets moved around” – are both amusing and pertinent to a higher plan. At a political reception, She meets He (Simon Abkarian), a waiter and chef who flirts unabashedly. They exchange phone numbers and are soon involved in an affair.

She is American of Irish descent. He is Lebanese, exiled from Beirut where he was a surgeon. In London, he is part of an underclass plying haute cuisine to wealthy white professionals. When He loses his job after a spat over religion at his workplace, He withdraws from the relationship and returns to Beirut. In the post-9/11 world of Yes, all the characters are in exile from somewhere else. She is an American of Irish Catholic extraction living neither in America nor in the Belfast of her roots. She and Anthony have a teenage goddaughter, Grace (Stephanie Leonidas), who thinks she is fat and knows that Anthony is having an affair with her mother, She’s friend and confidante Kate (Samantha Bond). After the tactile camaraderie of a school-yard splashed with sky-blue uniforms, Grace looks out of place in the sterile space of home. Meanwhile, the maid drifts from room to room. In an almost apocryphally idyllic setting of blossom and daffodils, a white woman in a white raincoat strolls with a dusky man in a black frock coat. Where do they belong?

In his 2001 book, An Accented Cinema: Exilic and Diasporic Filmmaking, Hamid Naficy finds a metaphor for that filmmaking that straddles cultures, races and nationalities, characterizing accented cinema as “liminal subjectivity and interstitial location in society and the film industry”. If Yes finds its characters, exiles in so many ways, tossed together in a world out of kilter – notice Alexei Rodionov’s canted angles – as a woman filmmaker Potter is also an exile, driven to inscribe herself in an art form deeply marked by patriarchy. In alternative cinemas, Naficy argues, the filmmaker’s relationship with the film is less one of parentage than of performance. In a fiercely experimental work like Yes, where exactly is the author? Is she She? Allen resembles Potter physically and both are professional women. While Potter is required by interviewers to make connections between films, She connects molecules to bigger purposes. Or is Potter He? Like a woman, He is sought for His flesh, but never for Himself. He is an exile, while his people remain persecuted by western white males. As we watch Potter improvise amid torrential ideas and inclement clouds in an (otherwise indifferent) ‘making-of’ film, she seems to inscribe not in but across the film. She is not conceiving but marking, inflecting. “We leave a mess in fact when we depart”, the maid confides, and Yes is full of people leaving their marks on the film. When He does a Lebanese dance on a table, it feels not like plot but a turn. Cut to a close-up of Grace’s high heels in a boutique as she struts her stuff.

These moments also chime with a theme. Chopping vegetables at work – Abkarian is so deft with his hands he seems to be painting his part – He tells of a “blonde American woman” in a tight dress on a bus eliciting the stares of men, her mouth a glistening gash. The scene is followed by She in a swimsuit assuaging Grace‘s misgivings about her body. Symbol of American imperialism – “too thin, too fit, not womanly” – the blonde American oppresses the dark world just as surely as tracers destroy Baghdad. Even Grace, herself dark and Mediterranean, appears colonized by New World logics of beauty and desire. I began this review the day CNN announced that 15 Iraqis had been shot by US Marines. Few western films have spelt out the trouble we are in. Fewer still make us heed so poignantly the subjectivities that trundle along before the ‘War on Terror’. If Potter wrote her script in iambic pentameters, you soon acclimatize, finding yourself drawn in by the life between the lines, slowing frame rates and smearing pans charting abstractions of thought and attitude as Yes seeks subterranean levels of understanding. As She sits by her dying Auntie’s bedside (Sheila Hancock), the entire scene plays out in the subliminal words of Auntie’s final thoughts.

While Yes is about what you can’t see, it is also about what you don’t ever hear. Potter shows She responding to His amorous words before we have even seen the scene in which they spoke. Such juxtapositions foreground mental purchase in a way that ’objective’ reportage elides. Potter belongs to a tradition – Len Lye, Nicolas Roeg, Peter Greenaway, Lynne Ramsay – which tempers realism’s spell over British cinema. In a Fall 2005 Cineaste interview, Potter said that film can “make links between layers of existence and layers of the invisible world.” Like life, like moving images, this film constantly flows away, microscopic bodies mutating, water running down a plughole. Visionary and soulful like only Wong Kar-wai can be, each cadence of music and shift of the light seems at once managed and found, flowing towards Potter’s plan like dialects to a mother tongue. Balanced and mesmerizing, Optimum’s transfer is sensitive to every dissolve and ellipse of this wraithlike film.

Following her Belfast Communist Auntie’s advice, at the end She fetches up in Cuba where She struggles to confess her lapsed Catholicism to a camcorder. Then something wonderful happens. It is an affirmation.