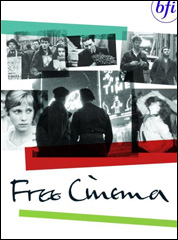 The late-1950s were years of transition in Britain. The Suez crisis of 1956-7 signified imperial decline. Immigrants were being seen on every street corner. The consumer society was eroding old allegiances. At the Royal Court Theatre, new drama rehearsed regional accents and resentments far from Mayfair drawing rooms. American rock ’n’ roll, skiffle bands and teddy boys signalled the arrival of the ‘teenager’. Responding to a stultified mainstream cinema of Kenneth More vehicles and stiff upper lips, a new wave was in the air.

Free Cinema sought to capture the experiences of ordinary Britons away from studio æsthetics and the Griersonian public information ethos. “Implicit in this attitude is a belief in freedom, in the importance of people and in the significance of the everyday” ran the original manifesto.

Specifically, Free Cinema referred to six programmes of short documentaries playing at London’s National Film Theatre between March 1956 and March 1959. Made for no money, shot on everyday locations before the advent of synchronized sound and steeped in the cultures of everyday life, these little films remain some of the freshest in British cinema. “With a 16 millimetre camera, and minimal resources, and no payment for your technicians, you cannot achieve very much in commercial terms” ran the blurb for the June 1957 programme. “But you can use your eyes and ears. You can give indications. You can make poetry.”

Free Cinema emerged partly out of calls for an indigenous cinema alive to real experience being voiced by Lindsay Anderson, Karel Reisz and others at the post-war journal Sequence (1947-52). Here were cultivated enthusiasms for Italian Neo-Realism, the British strand of American film noir, Jean Grémillon, Robert Bresson, John Ford and Nicholas Ray. To watch Free Cinema shorts like Together (Lorenza Mazzetti, 1956), O Dreamland (Anderson, 1953), Every Day Except Christmas (Anderson, 1957) and Momma don’t Allow (Reisz and Tony Richardson, 1956) is to witness the search for the serendipitous moment.

In this “definitive” DVD collection, released on the 50th anniversary of Free Cinema’s first programme, the BFI bring together key Free Cinema works and a selection of those influenced by the trend.

The institutional circumstances which brought these voices together under one roof should not blur the individual sensibilities and experiences animating these films. If Free Cinema is now primarily regarded as a documentary movement, Together is a fiction involving a pair of deaf-mute dockers in London’s East End negotiating the grind of hostile landladies, taunting kids and isolation as they stumble around the desultory bomb sites of a city recovering from World War II. You are reminded of the poetry of a dozen Neo-Realist films.

One Potato Two Potato (Leslie Daiken, 1957) is a window thrown open to record children’s street games already passing into history. Daiken was not a filmmaker but a researcher interested in the language and lore of schoolchildren.

O Dreamland voices a perennial preoccupation of Free Cinema: the impact of mass entertainment on traditional communities. Set at the Dreamland amusement park in the coastal resort of Margate, Anderson’s film surveys the grotesque sideshows and mechanical gewgaws as punters pass through.

If there is something here of Anderson’s characteristic bitterness on behalf of an alienated proletariat, Every day Except Christmas is more generous, focussing on preparations for another day on the Covent Garden fruit and vegetable market. Following the trucks as they roll into central London before being unloaded as the sun rises, this was the most ambitious Free Cinema piece yet, shot on 35mm and utilizing carefully synchronized dialogue. For cinematographer Walter Lassally in the documentary extra, Anderson’s film was true to the shape of the experience, building and building “like a fugue”.

Nice Time (Claude Goretta and Alain Tanner, 1957), We are the Lambeth Boys (Reisz, 1959) and Momma don’t Allow are alive with the pop sensibilities then washing over British youth. As in the work of Humphrey Jennings, arguably the father of Free Cinema (Spare Time, 1939; Listen to Britain, 1940), the people come to life in their interactions with and through modernity. Seen here is less the bovine crowds of O Dreamland, more the vibrant dynamics of a generation finding itself. At its best, Free Cinema was a warm, even loving, æsthetic free of malice or the egotism that would mark subsequent trends. Built around the window of the observant lens, these films are not about representation but revelation, a commitment crisply caught in these excellent transfers.

It was a special time. Free Cinema was made possible by the BFI’s Experimental Film Fund, set up in 1951 under Michael Balcon, a wartime producer noted for his commitment to realism. By 1959, the emergence of the lightweight Continental Coutant cameras, Nagra recorders and light-sensitive Ilford HPS stock was replacing the spring-wound 16mm Bolex with its 22-second shot length. In We are the Lambeth Boys, covering debates in a south London youth club became viable, while a truck ride through the West End looks forward to Richard Lester and The Beatles films. Piccadilly Circus at dusk became possible in Nice Time using Ilford stock. There is a sensuality about Nice Time which is far from our perception of the stitched-up ’50s and the bawdy humour of mainstream British comedy. Foreigners made a number of these films. Robert Vas charted his first experience of London as a Hungarian refugee in Refuge England (1959). Mazzetti was an outsider: “I was projecting my feelings.”

But by 1959 the impulse was already congealing. Whilst there is still something fresh about March to Aldermaston (1959), shot by a committee under the auspices of the Campaign for Nuclear Disarmament to protest the development of Britain’s hydrogen bomb, Richard Burton’s didactic voice-over sees Free Cinema losing its beautiful energies and ambiguities to the sound-bite. What is fascinating about vérité filmmaking is its spectre of a piece of their past in our present. Like ghosts, these traders breaking for tea, mill workers enjoying a summer outing and duffel-coated beatniks in deepest Berkshire are all that is left of these lives. I kept wondering what became of the people they were that day.