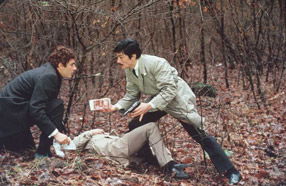 Jean-Pierre Melville’s movies have been called distant or abstract, but that’s not quite right. His decorous criminals and dogged policemen may be predisposed to understatement and carefully considered action, but they are far from unfeeling. In Le Samouraï (1967), for instance, the hired killer’s icy demeanour and ritualistic behaviour suggest that his aloofness is a defence mechanism, perhaps even a self-conscious one. But to dwell on this cool, stylish aspect of Melville is to miss much of what his pictures are about. For one thing, such an interpretation neglects the writer-director’s infrequently remarked melancholy.

I suppose Melville’s confidence in men’s ability to remain objective regarding the events of their own lives must be what leads people to emphasise his impartiality. His specialty – in the gangster films, at least – is not to expose the passions raging beneath a placid surface but rather to keep the audience guessing, to reveal characters’ secrets only when they do themselves. What are Corey (Alain Delon), the thief, or Mattei (André Bourvil), the police inspector, really thinking at any given moment in Le Cercle rouge? Melville refuses to tip his hand. Uncertainty is a key part of his aesthetic. A favorite trick is to suggest that the viewer may know more than the characters – and then to reveal that, in fact, we know less – or if not less, then at least different things. Melville’s method makes for a contemplative brand of suspense. In his best films, and Le Cercle rouge is one of them, this approach is elevated to the level of a philosophical principle.

In one early morning scene Corey, fresh out of prison, visits the apartment of a gangland acquaintance who has taken up with Corey’s former lover. We recognise the woman from Corey’s wallet photos, and at first we wonder whether he’ll discover her there, if she’ll wander into the room unawares or if the other man’s anxiety will give him away. As the two men chat tensely in the living room, the woman creeps to the bedroom door and presses her ear to it. Corey stops talking and stands in profile on the opposite side of the door. Has he known she’s there all along? Does he listen to confirm what he only suspected before? Is his thoughtful, opaque silence a sort of farewell? (Matched cuts of their faces create an intimacy at odds with the situation’s potential for violence.) Will there be a row? Delon’s cagey performance reveals very little – until Corey exchanges his photos of the woman for a pistol and a wad of the other man’s cash. It’s the mark of a man in Melville’s cinema to act on his own terms and only when he’s damn well ready.

Melville’s world is typified by solitude and betrayal, but Le Cercle rouge finds the director interested also in friendship. Coupled with his characteristic focus on professionalism and self-respect, at times the film can seem like Hawks without the wisecracks (or the dames). When Corey finds the escaped convict Vogel (Gian-Maria Volonté) hiding out in the trunk of his car, the pair team up to rob a lavish jewelry store on the Place Vendome. They recruit the sharpshooter Jansen (Yves Montand), an alcoholic ex-cop, who not only wears a tuxedo to the heist but even designs his own bullets. (An heir to Dean Martin’s Dude from Hawks’ Rio Bravo [1959], Jansen is as dapper as he is hungry to regain his self-esteem.) All the while, Captain Mattei trails Vogel (his own job is at stake because he let the prisoner escape) and leans on Santi (François Périer), an underworld nightclub owner, for information.

At its full, restored length of 140 minutes, the narrative manages to be both tight and leisurely. The precision of Melville’s style mirrors the discipline with which these five men generally act. Just as they choose action over words whenever possible – think of Corey ripping out the telephone wire after surviving an attack at the billiards parlour, still a portrait of composure – so does Melville prefer articulate photography or sound design to explanatory dialogue. This precept reaches its apex during the wordless, half-hour heist sequence that is the film’s centerpiece. After Jansen hits the all-important bull’s eye (an existential affirmation, really), the clapping succession of display case after display case unbolting conveys a sense of triumph, which the viewer likely shares. The sound reveals more than their expressions would have, even were they not wearing masks. Further examples of Melville and sound designer Jean Nény’s expertise abound, such as the contrast between Jansen’s silent, shoeless getaway and the crooks’ escape on squealing tires after the alarm has been triggered.

Henri Decaë’s photography is no less fluent. He and Melville don’t use many tight shots until after the heist when alternating close-ups – together with shorter scenes and abrupt transitions – consequently begin to seem ominous. However, Melville is fond of arresting, frontal compositions. These head-on poses do not carry the confrontational charge they would in a film by Godard, for instance, or Bergman. Instead, they provide an opportunity to look the characters in the eyes and, frequently, to partake of their intimacy. The first meeting between Corey and Vogel is shot this way, as is Corey’s silent exchange of a flower with a cocktail waitress at Santi’s club. When Mattei, wearing sunglasses and posing as a fence for the stolen jewelry, appears in a similarly edited scene, it signals the impending finality of his deception.

The sadness in Melville comes, in part, from his objectivity. His camera is resigned to its inability to transform a character’s fate. Mattei has told Santi that the latter must inform on the criminals, even if it’s “against [his] nature”. When the viewer discovers that despite much protest he has, one questions whether Santi has betrayed his principles, or whether being an informer was always in his character. Or is it man’s nature to be disloyal to himself? Perhaps this is one meaning of the film’s repeated line, “All men are guilty…. We all change – for the worse.” Style and professionalism cannot keep this knowledge obscured forever.