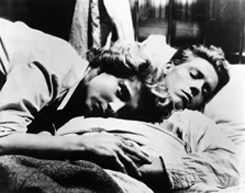 The actual tragedies of life bear no relation to one’s preconceived ideas. In the event, one is always bewildered by their simplicity, their grandeur of design, and by that element of the bizarre which seems inherent in them.

In my understanding, the film scholar’s metier is to search relentlessly for cinema of consequence – work that might be aesthetically innovative or perhaps noteworthy for its progressive content. A film could also be relevant dramatically, sociologically, in its representation of identities for example, or culturally, as a reference point in the career of an important artist or indeed, in the development of an art itself. Every now and then we are confronted by a piece of work that is all of the above – a monster text that has us jostling around, armed with our analyses and polemics in a desperate attempt to get another word in. Such is the case with Les Enfants terribles, released in 1950 and still captivating and difficult to write about in 2006. Standing as it did, on the shoulders of two mysterious and imposing figures – the writer, Jean Cocteau, and producer-director, Jean-Pierre Melville – it appeared impossible for critical scholarship to avoid a collision with this film (2).

Many of the questions have endured, and not because they remain unanswered but rather due to an academic hesitance to resolve things and shut the book. Which of the two artists exercised a greater creative influence on the final product? Could a cinema that was still comparatively rigid and conservative manage to negotiate the murky depths of Cocteau’s disturbing avant-garde novel? Is it tenable to suggest that Les Enfants terribles actually prefigured the nouvelle vague by almost a decade? I am relatively uninterested in debating the relevance of these issues, or in piling upon them my own contentions and reassessments of the facts. It seems rather more delicious to be lured unassumingly into the darkened realms of Cocteau’s strange and poetic universe, and to exploit Melville’s deft and assured guidance to find some light and a suitable vantage point.

Elisabeth (Nicole Stéphane) and her brother, Paul (Edouard Dermithe) share a cramped and disorderly room in a small Parisian apartment also inhabited by their ailing mother. Paul is infatuated with a beautiful schoolboy, Dargelos (Renée Cosima), who viciously fells him with a deadly snowball. He is brought home by his devoted friend, Gerard (Jacques Bernard), and then fiercely tended to by Elisabeth. With the doctor restricting him to bed-rest, the siblings – frequently joined by Gerard – permanently settle into a decadent and lethargic routine of reading, eating, and compulsively squabbling over trivial matters. By night they indulge in peculiar mind games in order to transcend the humdrum of their daylight hours. After their mother’s sudden death, the listlessness of their life (singular because theirs is a shared existence) begins to weigh heavy, and Elisabeth decides to find work as a model in a couture house. Here, she befriends Agatha (also Renée Cosima), who happens remarkably to be the splitting image of Dargelos…

Of the main characters in Les Enfants terribles, Elisabeth seems the most absorbing, largely due to Nicole Stéphane’s fearless performance. Isolated by her hypnotic control over the rest, and for orchestrating the coup that pushes them towards a destructive finale, she has quite naturally been likened by many to Lady Macbeth – the scheming, deadly woman who weaves a tangled web around the unsuspecting, weaker others. Very few point out those rare moments where, through the careful angles of Melville’s camera, Elisabeth almost evokes the passion and resilience of Dreyer’s Jeanne d’Arc. Manifestly a child of Cocteau, there is nevertheless a clear link between her and at least two of Melville’s most iconic characters. Like the beloved aging criminal in Bob le flambeur (1955), she is allowed a moment of “existential awareness” before her mirror, while washing her hands after her web has spun. And while her actions seem precise and calculated, she acts ritually – like the silent killer, Jef Costello (Alain Delon) in Le Samouraï (1967) – and operates in the schizophrenia between deliberation and madness.

Cocteau claimed that he only ever exposed wounds. Les Enfants terribles begins with an act of violence, exposing the first of many wounds in the narrative that bleed and fester through its course. Almost none of these are physical; until the very end, the heart and mind are subjected to far greater afflictions than the body. One begins to wonder whether the terrible siblings under Cocteau’s watchful eye and eloquent pen are in fact, Love and Cruelty, cohabiting in a claustrophobic space where nothing is simply down to cause and effect. It is always clear that one cannot be indulged without enduring the other. Agatha admits to putting up with Paul’s insults only so that she can be near him. Like their androgynous physical counterparts (Paul and Elisabeth, Dargelos and Agatha), Love and Cruelty are sometimes revealed as being indistinguishable, and become victims of their own abstraction. In a letter to Agatha (which she never receives), Paul writes, “Stupidly, I thought you meant me harm”. He seems to recognise both his myopic understanding of her intentions as well as his misguided projection of the memory of Dargelos’ cruelty (in the face of his love) onto her. On his deathbed, Paul mumbles that it is all her fault. Strangely, the poison that kills him is sent (apparently in fond memory) by none other than Dargelos. And so this ultimately fatal trajectory is punctuated with unremitting contradiction and cruel ironies; characters are condemned to love without forewarning of love’s nature, and the wounds remain incurable.

In a narrative that orbits the spheres of incest, homoeroticism and sado-masochism, Cocteau used his poeticism well to try and subvert a Manichaean understanding of his subjects. However, some of the verbosity – both in the novel and in his narration in the film – threatens to turn the story into a treatise on love, cruelty and the “tenebrous instincts” of his characters (3). It is here that Les Enfants terribles benefits greatly from being placed in the young and ambitious hands of Melville. Towards the beginning of the film, the camera tracks alongside Elisabeth and Gerard in a dimly lit corridor as she whispers to him about Paul’s sleepwalking habit. As soon as they enter into the candour of The Room, Elisabeth launches into an animated monologue, interrupted now and then by Paul’s acerbic retorts. Melville suddenly repositions his camera at a considerably low-angle, and the frame suggests the perspective of a front-row audience in a theatre, watching the action play out on stage. This is only one of a number of instances where he uses theatricality (already an inherent feature of the novel) to help construct the drama in his film. The choreography and performances of the actors, a strikingly self-reflexive deployment of light and shadow, and the use of Bach, Vivaldi and Cocteau’s intermittent voiceovers, all lend heavily to the sense of artifice, and also successfully translate the theatrics involved in Paul and Elisabeth’s private mind-games. Meanwhile, Gerard performs his role as the prototypical passive spectator – laughing, objecting and averting his eyes on cue. At one point, there is even a direct allusion to the recreation of a theatre, with Melville framing the curtain and empty seats before pulling his camera back into the “active” space (4). Throughout all of this, he is able to achieve important paradoxes in expression: the presence of glaring light in the realms of darkness, and the depiction of lethargy as frighteningly intense.

Melville also makes a fascinating reversal in this set-up by employing the drama of Les Enfants terribles in the service of finding a new cinematic language, and thereby freewheeling his way out of the unimaginative aesthetic plaguing French cinema at the time. Ably supported by Henri Decaë, his loyal director of photography, he unleashes an eager and dynamic camera into the filmic space. Cocteau may have wished us to drift dreamily from one room to another, as his characters tend to do, but it is Melville who ensures that this movement has a sense of fluidity to it. The film’s innovative production design enables a simple alteration of camera angle to result in an entirely new perspective on the mythic space of The Room – from bohemian settlement to prison cell. Les Enfants terribles already reveals Melville’s mastery in framing his subjects. Decaë also composes wonderful close-ups and the overhead shot is used sparingly, but to perfection. More interesting than the shots of individuals however, are those that carefully frame two or three characters. Several shots of Elisabeth and Paul are remarkable in capturing the androgyny mentioned earlier. At various points, Melville has his actors directly address the camera to great effect, a technique sadly under used in contemporary cinema (5). This final device serves as an arresting counterpoint to the position of unobtrusive observation we share with Gerard. And, as Ginette Vincendeau has pointed out, Melville even goes so far as to challenge the spectator’s common privilege of point of view by giving us a close-up of Elisabeth looking over the photographs pasted by Paul on The Room’s wall (of personalities that all resemble Dargelos) and then perversely denying us the requisite counter-shot (6). “It is this combination of direct engagement and distanced contemplation… [of being] both inside and outside… engaged in the film’s action while also observing it”, that Melville rigorously developed, till it became a distinct dramatic and stylistic feature of his films (7).

After the release of the film, music sellers on Champs-Élysées would refer to Bach’s concerto for four harpsichords as “the music from Les Enfants Terribles” (8). It shouldn’t be hard to consider this film more broadly as an epic reference point in the development of art. It is influenced and/or contains traces of surrealist art, existentialist literature, postmodern space, absurdist theatre, baroque music, Greek myth, Americanophilia, Shakespeare, homosexual avant-gardism, mid-20th century haute couture and jazz, in varying proportions. But even in this age of cavalier multi-media exhibitionism, we have to believe that an anomalous and consuming edifice of this design could only ever be the enfant terrible of the cinema.