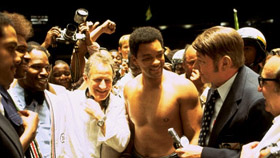 “I’m one year younger than Ali so what angered him, generationally, I know where he was at. I met Malcolm X in 1963 so I felt his assault on society, a much needed assault.”

“I wasn’t interested in telling this story as a documentary or an exercise in nostalgia. To idolize Ali is to diminish his humanity. What excited me about this project was the possibility of taking people inside his world.”

From its inception, Ali was a project shrouded in speculation. What could be said about Muhammad Ali that hadn’t already been said before? What attracted Michael Mann, a celebrated film stylist, to a biographical subject? What could possibly follow Leon Gast’s remarkable documentary When We Were Kings (1996)? And how could Will Smith, rap artist, the Prince of Bel Air, star of Men in Black (1997) and The Wild Wild West (1999), do justice to such a politically significant and well-known figure as Muhammad Ali?

The film spans ten years in Ali’s life. It begins in 1964 with the World Heavyweight Championship title fight with Sonny Liston that Muhammad Ali won, and ends in 1974 with the “Rumble in the Jungle” in Zaire, when Ali miraculously beat George Foreman to regain his crown. This jagged arc from winning the Heavyweight Championship title, losing it, and then winning it again traces an equally significant political period in Ali’s life. During this time, Ali renounced his slave name Cassius Clay to become Muhammad Ali. He converted to the Nation of Islam, widely regarded as a radical, nationalist black separatist group at the time. He survived the assassination of his close friend Malcolm X, the assassination of Martin Luther King, and the Vietnam War. And this 10-year-arc spans several key relationships in Ali’s personal life – his three wives, his entourage of trainers, managers and sparring partners, and his curious long-standing friendship with ABC sports reporter Howard Cossell.

Mann’s desire to be true to the visual record of the decade, to historical memory, and his extraordinary efforts to accurately portray real life characters and events, are well documented. His cinematographer Emmanuel Lubezki describes how closely they studied photographs of Ali’s life and fights, scrutinizing “every detail – every lamp, every piece of furniture, and every window’. (3) Production designer John Myhre relates the way they rebuilt The Tiger Lounge in Chicago where Ali danced with his first wife Sonji. The former club had become a furniture shop, but “they pushed away the furniture, put up a couple of walls and shot the scenes on the site where Ali’s first romance had blossomed”. (4) Key fights in Ali’s life are recreated blow by blow. Even Howard Bingham, Ali’s close friend and personal photographer, was enlisted as a consultant on the film. A production snapshot shows Mann intently holding a photograph of Malcolm X and Martin Luther King in front of the actors playing these parts, and so on.

But while Mann’s film is certainly interested in this complex period in American history and accurately portraying the details of Ali’s career throughout, his historical reconstruction involves more than just presenting or “setting the record straight”. In his previous film The Insider (1999), Mann demonstrated a growing interest in the moral and political reality behind the narrative, while preserving and extending his poetic, expressionistic film style. It is a style that reminds us this is a Michael Mann film and that his story is also being told.

In an earlier Mann film, Heat (1995), Neil McCauley (Robert De Niro) and Vincent Hanna (Al Pacino) who have been tracking each other throughout the film, finally come face to face in a coffee shop. The meeting is pivotal to the narrative but it is equally celebrated as the first screen pairing of Robert De Niro and Al Pacino. This typical Mann fusion of actor and character also happens in Ali. Will Smith spent over a year becoming Ali; building his body, learning the moves of a prize-fighter, getting voice lessons from Baptist ministers so his cadences were just right. He was even schooled in the principles and philosophies of Islam in order to understand the spiritual Ali. And there are mesmeric moments in Smith’s performance where he does transform into this extraordinary man. These moments include some of Ali’s most famous speeches: verbal volleys that explode and ricochet as he approaches an important fight, or as he playfully proclaims his “greatness” or denounces America’s unjust role in the Vietnam War. There are also the smaller gestures – precise and reflective moments as he sits in the back seat of a car, or caresses his wife, or trains alone. His performance has justifiably earned Smith an Academy Award nomination. And yet choosing someone with the profile and notoriety of Will Smith will inevitably remind us that he is an actor playing this role. For Mann the choice came down to the following necessity: “ I didn’t want an Ali Xerox”. (5) Instead we get another Michael Mann layered performance, superbly blending character and actor. 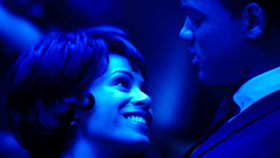 In the case of Ali, this sense of a deliberately constructed film may trouble audiences who expect a straight-forward biography. Alternatively those not conversant with the life and times of Muhammad Ali may leave the cinema somewhat bewildered. But what is most compelling and extraordinary about this film is exactly this impressionistic re-telling of the past. Mann is certainly interested in the world that Ali lived in, but he is even more interested in that world from Ali’s perspective. There are countless close-ups of Ali’s face, gestures and responses. With cameras attached to the boxers’ heads we are trapped in the centre of the blows, sweat, blood and pain of the fight scenes. Lubecki claims that “Ali is about 99 percent Steadicam and handheld work”. (6) Historical figures like Malcolm X are mainly established and portrayed in terms of Ali’s relationship to them. Wives appear and disappear only to become part of a larger fresco of passers-by; people who watch Ali when he fights, who surround him as he walks, whose Nikon cameras flash at him in the ring, who cheer him in street parades, and who run beside him along the back alleys in Zaire chanting “Ali boma ye” (“Ali kill him”) prophesising his impossible victory.

The opening montage sequence has also been suitably celebrated. (7) It begins with Ali running through dark streets in the night, preparing for his big fight with Sonny Liston. Juxtaposed with this is Sam Cooke singing in a smoky nightclub while women dance and swoon at his feet. Cut to fleeting close-ups of Ali’s face as he rhythmically pounds a punching bag in the gym. This celebration of black culture – of sport and music – is layered with a selection of formative events in his early life as a child growing up in racist America. On a segregated bus with his mother, Ali passes a white man reading a newspaper reporting the lynching of a black Chicago youth. Ali stares in confusion as his father paints a mural of a blonde blue eyed Jesus. These events are intercut and cross over each other until the moment that Ali first explodes into the boxing ring. Everything has been leading up to this climax with its complex layering of music, image and sound establishing a context for understanding Ali. It also lets us know we are in the remarkable world of Michael Mann.

Ali has been criticized as an over-directed film, a film that only offers momentary images of who Muhammad Ali was, why he was important and how he contributed to the culture of his time. And yet each time I have returned to the film I have found something else, something more. For instance the extraordinary sequence around the assassination of Malcolm X is weighted down with a darkness and inevitability as he walks towards the front of the hall to greet his final congregation. The camera lingers behind him, but close to his face, as if a broader vision is not possible. We cannot see the space around him or what lies ahead, and this feeling of entrapment is emotionally heightened by the sombre music. He reaches the lectern as the congregation begins to cheer his arrival. Cut to Ali driving, alone, into a dark tunnel, then back to Malcolm X who is immediately and brutally cut down by his assassin’s bullets. We finally settle on a close-up of Malcolm’s dying face framed by a crescendo of screaming confusion. Ali’s car is stopped in the street as he is told of Malcolm’s death. He sits there, stationary, listening to the radio, weeping in disbelief like those in the streets around him. The camera leaves him alone, at a distance, rendered through the blurred, watery windows of his car. Words from the song “It’s been a long time coming, but I know a change is coming” underscore these events, and inevitably link the destinies of the two men, before violently erupting into Ali’s next monumental battle in the ring. This is Mann at his finest.

In the complex world of Ali, Michael Mann privileges the poetic courage of belief and resistance, of hope and resurrection. It transcends biography. It is an impressionistic odyssey interweaving the heart and mind of the great Muhammad Ali. It is another great Michael Mann film.