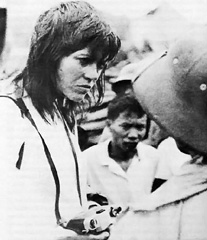 This annotation previously appeared in Senses of Cinema, no. 19, Mar–Apr 2002.

This section of the film makes use of stills from The Magnificent Ambersons (Orson Welles, 1942) and other movies including Klute (Alan J. Pakula, 1971 and starring Jane Fonda) and The Grapes of Wrath (John Ford, 1940 and starring Jane’s father Henry Fonda), as well as publicity stills from Tout va bien. But the main part of the film repeatedly scans the photo of Fonda (taken by photographer Joseph Kraft and subsequently published in L’Express). This image is repeatedly analysed, in its original form, or cropped, to enable examination and deconstruction of various elements of the images – such as the traditionally garbed Vietnamese. In spite of the sometimes elegant, sometimes plain bloody-minded commentaries and voiceover debates from Gorin and Godard, the film remains the purest example of minimalist political filmmaking at its most simplistic and as such resembles as much a piece of radical underground anti-film practice as anything in the history of cinema. But the film also indicated a dead end in polemic film practice, remaining cold and alienating for all its exhilaratingly coruscating dialogue and visual intensity.