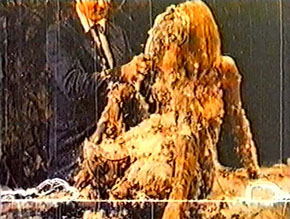 The following is an excerpt from notes accompanying “The Essential Frame – Austrian Independent Film 1955-2003”, a two-day program of screenings and talks on Austrian independent filmmaking curated by Mark Webber and held in London, 31 May-1 June 2003.

Independent filmmaking emerged in Austria in the early 1950s. For a long period after the Second World War, artists in its capital city, Vienna, deep within central Europe, were isolated from the developing artistic cultures of the western world. With no domestic tradition of auteur cinema, the idea of film as means of personal expression was rooted more in the country’s history of radicalism in painting, architecture, literature, music and philosophy. 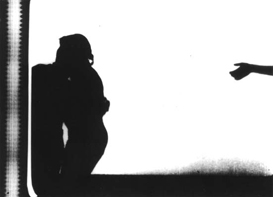 Mosaik im Vertrauen (1955) by Peter Kubelka is widely acknowledged as the first truly avant-garde film to be made in Austria. Though earlier films by Herbert Vesely (beginning with und die kinder spielen so gern soldaten, 1951) and Kurt Steinwendner & Wolfgang Kudrnofsy (Der Rabe, 1951) started to move in this direction, Mosaik certainly represented a giant leap in cinematic thinking. Ferry Radax, a Surrealist photographer who assisted on that film, subsequently worked for several years on the surreal, quasi-narrative Sonne Halt! (1959-62). Marc Adrian and Kurt Kren (working individually and in collaboration) began to experiment with coloured leader and pre-composed editing scores in 1956-57. As the decade ended, Kubelka established his theory of “metric film” with Adebar (1957), Schwechater (1958) and Arnulf Rainer (1960). These three works explore rhythm and formal composition from a fundamental position that cinematic articulation occurs in the space between two adjacent frames.

During the 1960s, Vienna’s most active group of artists were the Wiener Aktionisten, whose unprecedented, provocative actions shocked contemporary society by engaging with the “politics of experience”. Using nudity, ritual and violence (and quantities of raw meat, blood and other seminal fluids) they confronted modern taboos and challenged conventional attitudes toward the human body. Many of these happenings were documented, notably in key works by Kurt Kren, who developed a hard, rapid editing style that astutely translated these uncompromising activities onto film (e.g. Mama und Papa [1964], Leda mit dem Schwan [1964], Selbstverstümmelung [1965]). Artists Günter Brus, Otto Mühl, Rudolf Schwarzkogler and Otmar Bauer also shot or participated in their own films of the “actions”.

With Kren as the direct connection to the first wave, a second generation of filmmakers began to investigate the medium, contributing to what would later become the international structural / materialist film debate (here directly connected to the material actions of the Aktionisten). 1967 was an intensely productive year: Kren made Sinus b, TV and 20. September (the legendary “eating, drinking, pissing, shitting film”), Hans Scheugl made Wien 17 Schumanngasse and Hernals, and Ernst Schmidt Jr. made Filmreste and began the Farbfilm trilogy. The following year, Gottfried Schlemmer made his own uncompromising statement by shooting a 10-minute fixed view of a primitive digital clock in 8h01-8h11.

At the Palais Palffy nightclub on 26 January 1967 a film screening gave birth to Austrian expanded cinema as Peter Weibel, with no conventional films to show, presented Action Lecture No. 1 and Nivea, combining projection and performance. “Film happenings” were innovative and spontaneous, often relatively inexpensive to present and in vogue with the cultural landscape of the underground. Valie Export and Peter Weibel, working either together or alone, embraced this new genre, building their performances on political and theoretical frameworks, with communication and technology at the core of many projects. Tapp- und Tastkino, Cutting and the more whimsical Exit and Ping Pong date from 1968. There was a distinct sense of one-upmanship in the conception of many expanded works: Hans Scheugl attempted to make the final statement with zzz: hamburg special – a length of thread wound through the projector for any format (preferably 35mm CinemaScope).

Export, Kren, Scheugl, Schlemmer, Schmidt Jr. and Weibel founded the Austria Filmmakers Cooperative in early 1968, fired up with enthusiasm generated by the international festival at Knokke-Le-Zoute that New Year. They began to regularly exhibit abroad, participating at festivals and on the flourishing cooperative circuit. But by 1969, the movement was already losing impetus as the Coop lost key distributing members to Karlheinz Hein’s semi-commercial Progressive Art Productions (based in Munich), and several moved out of Austria. To continue the activities in Vienna, Franz Fallenberg (aka Falmbigl) founded the Kuratorium Neue Österreichischer Film, organising screenings and alternative distribution.

Outside of the Coop circle, Franz Novotny, Michael Pilz and Gerhard Rühm were among those also making films during this period. Marc Adrian used early computers to bring randomisation into his working practice, and made several films with text as the only visual content. In the late 1960s he entered a period of formalist diary films that had psychoanalytic bias. He has taught in Austria, Germany and the USA and continued to work consistently through to the present day. Peter Kubelka worked for five years on the precise sound and image editing of Unsere Afrikareise (1966) and subsequently made his first journey to the USA, where he became a central figure in the international avant-garde and co-founder of Anthology Film Archives. Together with Peter Konlechner, Kubelka had already established the Österreichisches Filmmuseum in 1964, in direct opposition to the policies of the state Filmarchiv. This film museum, whose exhibition space was the screen, collected and exhibited the great works of cinema with particular emphasis on avant-garde history.

The next decade brought lean years for Austrian filmmaking. There were a few, almost resigned, pieces of expanded cinema in 1971 – Schmidt Jr. made Umweltschutz (Environmental Protection) which was sent to a festival with the instruction that it be thrown away (it was) and Kren shot the funeral of his friend Klemmer and threw the exposed reel into the open grave – but overall, the tide of enthusiasm and activity that dominated the late 1960s was soon dissipated around the turn of the decade. 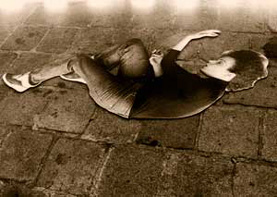 Kren continued to make many short films, settling first in Germany in 1971 before relocating to the USA in 1978. Weibel began to work with video before becoming a multi-media installation artist and theoretician. Valie Export was likewise multi-disciplinary; her evolving performance activity incorporated developments in video and live transmission, though she also continued to make film. Having created … Remote… Remote… and Mann & Frau & Animal, (two radical affirmations of female sexuality exploring her body and physical/emotional reaction to pleasure and pain, both 1973), she was the first recipient of a new funding scheme which allowed her to make Unsichtbare Gegner (1976), the initial part of a trilogy of feature films. Schmidt Jr., also received such an award from the Bundesministerium für Unterricht und Kunst and, working together with many friends, produced the documentitive collage Wienfilm 1896-1976 in 1977. In 1974 Hans Scheugl and Schmidt Jr. published an extensive two-part lexicon of the international underground and experimental film movement. The long out-of-print “Subgeschichte des Films” (Subhistory of Film) is still widely coveted.

There were few new filmmakers creating short films during this time. The painter Maria Lassnig made a succession of personal animations in the USA throughout the 1970s, later returning to Vienna where she taught and founded the Studio für Experimentelle Animation in 1982. In the documentary field, Wilhelm Gaube created portraits of Austrian artists and Alfred Kaiser reappropriated Nazi newsreel footage in the sardonic compilation film Ein drittes Reich (1975). Under the influence of a fatal cocktail of Andy Warhol’s Factory, the Velvet Underground and Iggy Pop, Dietmar Brehm started work in Linz in 1974, commencing a monumental body of work in 8mm and 16mm. Many were turning to the newly accessible super-8 format by the end of the decade, kick started by the rough and ready punk aesthetic of do-it-yourself. One of the most productive was Robert Quitta, who made Film ist Fest, a series of 150 short films, between 1977-79.

Throughout the 1980s, a third wave began to appear, including Linda Christanell, Gustav Deutsch, Norbert Gmeindl, Renate Kordon, Wolfgang Lehner, Bady Minck, Bärbel Neubauer, Lisl Ponger, Johannes Rosenberger and Arnold Schicker, many of them working in the smaller gauge. To harness this new surge of activity, a revitalised Austria Filmmakers Cooperative was initiated by Hans Scheugl, Moucle Blackout and others in 1982. Inspired by the active super-8 scene he observed in Berlin, Peter Tscherkassky began filmmaking, captivated by the grainy image produced by the format. Using repetition, recycling footage and often manually exposing and printing the filmstrip, he dives straight to the core of the medium, making Urlaubsfilm (1983), Motion Picture (1984), Manufraktur (1985) and tabula rasa (1987-89). 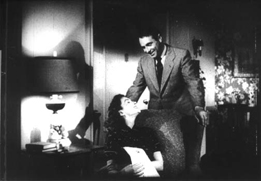 Valie Export realised the short Syntagma (1983) and a third feature Die Praxis der Liebe (1984), as well as producing several documentary projects for Austrian television. Mara Mattuschka’s films, such as Kugelkopf, Der Untergang der Titania (both 1985) and Es hat mich sehr gefreut (1987), are performance based, sharing some surface similarities to the earlier work of Export and Aktionismus. Appearing in character as Mimi Minus, language and the female body are at the centre of her filmic inquiry. In 1989, Martin Arnold made pièce touchée, the first of a celebrated trilogy of films in which he applied analytical step-printing to “found” Hollywood footage, bringing hidden meanings from apparently benign material. Kurt Kren abandoned filmmaking and worked as a guard at the Museum of Fine Arts in Houston, Ernst Schmidt Jr. died destitute in Vienna, 1988.

Sixpack Film was established in 1990 to promote the work of Austrian filmmakers to international film festivals, in many ways as a direct response to the present state of the Austrian Coop at that time. The founder members Martin Arnold, Brigitta Burger-Utzer, Alexander Horwath, Lisl Ponger and Peter Tscherkassky recognised the need for a more stable and proficient distribution outlet following the phenomenal success of pièce touchée on the festival circuit. The organisation soon expanded into a distribution outlet and started to organise events, fostering a new surge of activity throughout the decade. This in turn inspired the next wave of filmmakers including Joseph Dabering, Thomas Korschil, Hannes Langeder, Thomas Steiner and Virgil Widrich. Many who emerged in the 1990s were students of the Hochschule für angewandte Kunst Wien and Kunsthochschule Linz including Alexander Curtis, Gerhard Ertl & Sabine Hiebler, Siegfried Fruhauf and Norbert Pfaffenbichler.

Meanwhile, in Frankfurt, students of Peter Kubelka’s classes at the Städelschule (including Kerstin Cmelka, Thomas Draschan, Albert Sackl, Bernhard Schreiner, Georg Wasner and Günther Zehetner) develop into an active group, absolutely committed to the film medium. In 1999 Peter Weibel became director of the ZKM centre for new media in Karlsruhe, Germany, while Valie Export continues to lecture at the Kunsthochschule für Medien Köln. Kren had returned to Vienna in 1990 and died there in 1998. 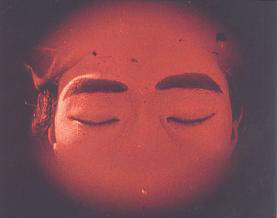 Johannes Rosenberger and friends founded Navigatorfilm in 1992 as an independent production company for the development of creative documentary films. Joerg Burger, Andreas Horvath and Martina Kudlacek are also active in the documentary genre, while Tizza Covi, Rainer Frimmel and Kathrin Resetarits make a more personal style of film essay.

A mid-1990s retrospective film series curated by Steve Anker for the San Francisco Cinémathèque toured extensively, prompting a worldwide revival of interest in the pioneering work of Austrian filmmakers. Independent filmmaking went through another incredibly productive period, built upon the foundation of its rich history, impassioned teaching and comprehensive critical writing, and often subsidised by the forward-thinking .KUNST bundeskanzleramt funding body.

While many artists continue to work with film material as an aesthetic choice, by the end of the 1990s young students of film and media were embracing the now affordable and rapidly advancing digital video technology. Michaela Grill, Jürgen Moritz, [n:ja], reMI (Renate Oblak & Michael Pinter), Billy Roisz and Michaela Schwentner are innovators of this energetic new field. These contemporary artists have developed a dynamic movement that is respected on an international scale. Their works, often created in collaboration with electronic musicians such as Christian Fennesz, Radian and Martin Siewert, are collectively celebrated in the series of “Audiovisions” touring packages from Sixpack. Martin Arnold has also created digital work, applying compositing technology to “industrial” cinema in the context of his Deanimated installations at Kunsthalle Wien. Independent filmmaking activity will continue, though the variety of mediums used by the artists will doubtless become more diverse.