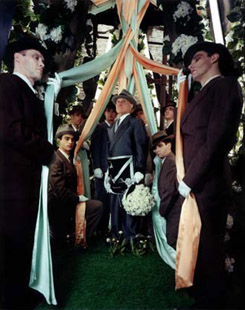 A number of articles here approach the outer limits of cinema: cinema outside the space of the movie theatre; cinema where the focus is no longer on the screen (Anthony McCall’s Line Describing a Cone [1973]); cinema without film strip, projector, sound or image (Valie Export’s Tapp und Tast Kino [1968]). As Export has stated in a lecture on “expanded cinema” (reprinted here) the radical goal she shared with her fellow avant-gardists of the late 1960s and early ’70s was no less than the abolition of boundaries between art and life – escaping the prison of representation by including the audience within the cinematic space. Though the utopian ideals of these artists may now seem impossibly remote, we still have much to learn from their explorations of hybrid forms and technologies, which prefigure more recent challenges to the “purity” of cinema.

It isn’t only the increasing acceptance of video as a kind of “virtual” film, in theatres and elsewhere, that creates difficulties for us when we come to ask nowadays what is cinema and what is not. Discussing films and videos made by a range of young, gallery-based artists over the last five years, Chris Dercon remarks in his article “Gleaning the Future from the Gallery Floor” that these are works which seek to “consume the whole of cinema…they do not distinguish between high art and low art, nor are they concerned with cinephilia”. This formulation helps account for the resistance displayed by some critics towards the work of, for example, Matthew Barney, whose Cremaster cycle (of which I’ve seen only one part) has been accused of simulating or gesturing towards an idea of cinematic spectacle, without paying much heed to the specifically cinematic techniques such as editing and framing which such spectacles have used in the past to create meaning.

Yet objections of this kind arguably fail to take into account the double nature of cinephilia itself. On the one hand, traditional cinephilia marshals a discriminating gaze which claims to see more than is apparent to the “ordinary” viewer, possessing a wisdom that expresses itself in systematic analysis and canonical lists that attempt to sort the wheat from the chaff. Yet there is also a kind of cinephilia which is wholly indiscriminate and unsystematic in its demand for particular, fetishised scenes and moments, for the grain of projected celluloid, or for moving images in general. Grounding itself in personal experience and subjective whim rather than expert knowledge and would-be objective judgment, it’s this latter cinephilia (which may manifest itself as a love of “trash” or simply a type of childhood nostalgia) that’s by far the more widespread and “normal”. Hence it’s no surprise that many young artists who draw on cinema take up an attitude to the medium which is less craft-based than fundamentally uncritical – as if movies were understood as belonging more to life than to art.

Can the two standpoints be reconciled? Jim Knox implicitly addresses this problem in his discussion of Jack Stevenson’s collection of essays Land of a Thousand Balconies, one of the highlights of this issue’s extended book review section. Knox praises Stevenson’s attention to such forms of “para-cinema” as Scopitone clips and the creative gimmickry of schlock maestro William Castle, an “expanded cinema” pioneer in his own right. Yet he also resists Stevenson’s celebration of trash at the expense of art, maintaining that “the artistic traditions contemporary with cinema, from Modernism onwards, reach their apotheosis in precisely the kind of ‘anti-art’ that Stevenson valorises”. Another way of saying this might be that both avant-garde “anti-art” and the self-conscious cult of “trash” aim at undermining the artist’s status as all-powerful creator, freeing audiences to reject conventional standards of judgment and seek out their own unknown pleasures. Yet it’s hard to say whether getting rid of preconceptions about what qualifies as “cinema” or “art” should be considered an end in itself, or a first step towards the task of rebuilding a shared aesthetic from the ground up. At the least, though, it’s a way of reminding ourselves that watching a movie is not simply a matter of contemplating life from a distance, but an experience as immediate and real as any other; and we have no way of knowing beforehand what criteria we should use to “judge” this experience, or how we ourselves may be affected and changed.

Special thanks for this edition go to James Leahy, Holly Aylett and Sylvia Lawson.