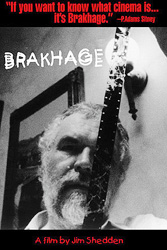 Brakhage is about the film artist Stan Brakhage (January 14, 1933–March 9, 2003). It was about a living legend and now it is about a dead legend. It is probably still a bit close to the bone to put it that way. Compared to other artists working the same turf there is much written on Brakhage (and by Brakhage). There are more than 300 films of his in distribution. People who don’t know about experimental film, about film as art, about personal filmmaking, seem to know about Brakhage. Film artists respect and are inspired by his work and his attitude. He had many disciples who revere his work. Some are interviewed in this documentary.

Surf the internet and you can find out that he was a man who transcended his medium, was larger than life, kind, generous, difficult, eccentric, complex, obsessed, dedicated, different, and with surprising impulses. You could talk to him. Perhaps slippery but an ever present persona, one that needs to be contained, marketed? Especially now that he has passed away.

That is what this film tried to do while he was still with us. Canadian documentarist Ron Mann (Comic Book Confidential [1989], Twist [1992], Grass [1999]) had suggested to Jim Shedden that he should make a film about his hero and friend, to package him for mainstream consumption. So, is it a recycled, homogenised Brakhage that comes out the other end?

Brakhage partially contains the filmmaker but does not pin him or his work down. It has been suggested by Shedden that his documentary primes you for the chase. Yet there is a great stream that needs to be crossed to get to Brakhage’s work from this documentary. Could it really be any different? Just as a film about the twist and marijuana are removed from the experience of dancing or smoking dope, this documentary does not really deliver the direct experiential nature of Brakhage’s art, a gestural, often silent, abstracted, body-oriented visual experience.

Brakhage’s project (with his first wife Jane Collom) was about implementing an everyday personal film practice that dealt directly with the nature of film, the nature of seeing. It is a practice that had to exist in opposition to spectacle and storytelling, politically and aesthetically. Containing that project within the documentary form diminishes and changes it.

There are morsels, it must be said, but perhaps the By Brakhage DVD (compiled by Fred Camper) comes closer to presenting the experience of the film work itself, especially given the stop/start personal viewing space that is opened up through the practice of home viewing and replay, and the option of watching complete films rather than excerpts.

There are important and trivial facts about Brakhage that are not in this film. Feel free to read them as a peripheral addendum to its viewing. Brakhage was born Robert Savage on January 14, 1933 and was adopted by Ludwig and Clara Brakhage two weeks later. His step-parents separated when he was six, from which time he lived with his step-mother in Kansas City. He was a boy soprano. There is a record of him singing. Matt Stone and Trey Parker, the creators of South Park were two of his many students in Boulder, Colorado and the Chicago Art Institute. The character of Stan in South Park is an homage to him. When he died of cancer on March 9, 2003, his passing was noted at the subsequent Academy Awards ceremony, amazing for a person working within a “marginal” film practice. Like “many of his generation” he was interested in the innovative writings of Ezra Pound and Gertrude Stein.

Most importantly there was also his own poetic writing to entwine and nourish his broader artistic project/practice. Unfortunately this is not explored in the documentary. This writing exhibited a direct honesty, an inventively playful, diaristic expressiveness and a Joycean layering of meaning that complimented the film-work. These are characteristics also evident in his lectures/talks that we do have access to in this documentary. The oft-quoted manifesto-like opening to “Metaphors of Vision” works like an early mission statement for his undertakings:

Imagine an eye unruled by man-made laws of perspective, an eye unprejudiced by compositional logic, an eye which does not respond to the name of everything but which must know each object encountered in life through an adventure of perception. How many colors are there in a field of grass to the crawling baby unaware of ‘Green’? How many rainbows can light create for the untutored eye? How aware of variations of heat waves can that eye be? Imagine a world alive with incomprehensible objects and shimmering with an endless variety of movement and innumerable gradations of color. Imagine a world before the “beginning was the word.” (1)

Shedden’s film does include the work of other film artists: Jonas Mekas, Willie Varela, R. Bruce Elder and George Kuchar. Kuchar’s footage takes the cake, showing how, in the right hands, engaging humanity can be constructed from just a series of photographs. Through the procession of excerpts from Brakhage’s own films we become aware of his critical movement away from the dramatic flow of psychodrama and the use of actors, found in his early work, to a cinema that exists almost exclusively within the first person. The film documents that movement from the influence of works like Maya Deren’s (so important in helping to kick-start the American avant-garde in the 1940s) to a layered and fragmented gestural form.

Though not examined in the documentary, Daybreak (1957) sits at a nodal point in that transition. To communicate some sort of psychotic episode – as the main character moves through a park – the linear flow of images is broken-down through a stuttering, almost single frame editing technique. It is as if a gash opens up in the film itself for us to fall into. This moment marks a step into the more abstract, impulsive cinema that Brakhage explored and settled.

It is a representational shift that can be characterised as a move into the body as a physical and cellular entity. For Brakhage this is enabled metaphorically by the reflexive body of film’s materiality. As the “manifesto” also suggests, this is a way of seeing, a way of being that articulates aspects of childhood itself.

I find the occurrence of this shift interesting given Brakhage’s own problematic early childhood. It is also significant that it attained its full force at a time of engagement/disengagement with family life through the development of his relationship with wife Jane. An important aspect of engagement with family life is that as a parent you are faced with the prospect of revisiting your own childhood through your relationship with your children. This film allows for some insights into that.

For Brakhage himself, Shedden’s film may have marked a passing of responsibility for the project of contextualising his work, a movement away from his own “legendary” talks, writings and appearances. It has certainly seems to have worked out that way. Fuelled by a career of teaching, Brakhage’s presentations and talks communicated a disarming sense of authority and comfort inside his own myth. The maintenance and questioning of that myth is now left for others to carry on.

In the end, Brakhage was an original who came closer to articulating a vision, his vision, than the rest of us. This film can act as a kind of “QuickStart Sampler for Dummies” of Brakhage’s world. Yet on some level I feel that it is all too easy to wax lyrical about all of this: I would have liked a few more warts dissected. This could help the experimental film community move forward. But then again, about a subject like this, I can be very hard to please.