Search
Home
Film and the Other Arts
Issue 18

Robert Walsh is the legal affairs editor for Vanity Fair. He has worked as an editor at The New Yorker and on books by Harold Brodkey and Susan Sontag. He wrote the preface to the 1998 edition of Manny Farber’s Negative Space. This interview was recorded on 21 July 1998.

Noel King: How did you first come into contact with Manny Farber’s writing?

Robert Walsh: I saw a passing reference in Susan Sontag’s “Against Interpreation” essay, in which she praised Manny’s film criticism. (1) I was about sixteen, and I looked up some things of his in the library – this was about shortly before his collection Negative Space (aka Movies) came out. I became a fan instantly, just reading the criticism.

Then, in 1981, Manny showed a few paintings at the Guggenheim as part of their Emergent Artists show. He was 64! He’d started doing the figurative paintings – the auteur series – and I saw a couple of those. I hadn’t known that he was a painter and I was just mesmerised. In 1979, I had gone to his MoMA lecture on The Honeymoon Killers (1969), which was an astonishing thing in the late ’70s. (2) It was basically entirely improvised. I mean, I’m sure he was prepared and he knew vaguely what he was going to say, but he wasn’t reading a full script, and clearly he was free-associating from time to time. He talked about Frank Borzage, Renoir, and The Honeymoon Killers, and he showed a Little Rascals/Our Gang clip. He also talked about Laurel and Hardy a lot, his notions about how films reflect their period very exactly, and he made other references to people like Chantal Akerman.

When he was showing The Honeymoon Killers, he let the film clip run on for much longer than he had planned and then kept talking. Basically, he closed the place down. The union had to close the auditorium at MoMA, otherwise he would have gone on longer. Surprisingly, an enormous number of people were still there, and that was three hours into it.

Then, in 1982, I was living in Manhattan, on Chambers Street downtown and Richard Bellamy, who was Manny’s dealer, had the Oil and Steel Gallery near the river. For about a month he had a show of Manny’s paintings up, including most of the tondos, the auteur series, the candy series, and the stationery series. It took up the whole gallery. I lived two blocks away and went there nearly every day, whenever they were open. I took snapshots of individual works and of details and became madly obsessed with the paintings. I couldn’t believe how wonderful they were.

In 1984, I went to work in the fact-checking department at The New Yorker, and because I was interested in movies I wound up working with Pauline Kael, which I was initially apprehensive about but enjoyed enormously, and I ended up editing her officially and unofficially until she retired. 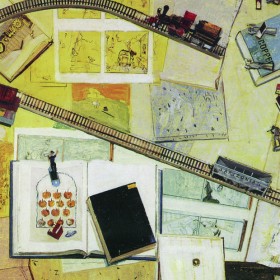 I saw that Manny was having a retrospective at the Museum of Contemporary Art in Los Angeles – the Temporary Contemporary – from November 1985 to February 1986, and I decided to go out there to see it, and I mentioned this to Pauline. I knew that she and Manny were old friends, but they hadn’t been in touch much since Manny’s move to California. Also, Pauline had even known Manny’s parents. He had grown up in Arizona and then his family moved to Berkeley, where Pauline met them.

So when I said that I was going out to see Manny’s show, Pauline said, ‘You really should meet him and say hello for me.’ This is not something I would normally do, but I called them in Leucadia and Manny said they were going up to L.A.– it was the final weekend of the show – to take one last look. He also told me that Patricia had a room installation at the L.A. County Museum. And he said that there was a gallery in Los Angeles that had some of her paintings.

So I went out there, and I visited the gallery, called New Space. They had dozens of Patricia’s paintings – I hadn’t seen any of her work – and they also had dozens of slides of her installations. So I had the crash-course in those, and then I met Manny and Patricia at her L.A. County installation. Patricia’s mother was also in town from New Jersey – that was another reason they had come up to L.A.

So I met them, and we had lunch, and we spent most of the next thirty-six hours together. There were a lot of other paintings of Manny’s at the Temporary Contemporary that I had never seen, and I was amazed. So I spent time with them, talking about what he was doing; walking around the museum with Manny talking about the paintings. And ever since then, for the last 13 years or so whenever Manny or Patricia had a show – I’ve gone out there. At least twice a year. They’ve stayed at my house when they’ve been in New York, and Manny has had a couple of shows here. I’ve taped hours and hours of Manny, and of Manny and Patricia together. And I’ve been working – extremely slowly – on a book about both of them. It began as a book about him but it has proliferated, and it’s hard to talk about him without talking about her, particularly because she’s very involved in his paintings. She discusses them and critiques them, and she is often the one who tells him when to stop – she says, “That’s finished.” She’s had a lot to do with selecting the background colours, even down to suggesting things like, “This potato would look good in that painting.” So there’s always been this dialogue, and it’s very hard to talk about Manny’s paintings without taking her contributions into account. At the moment I’m trying to write about the later paintings. Manny’s a bit sick of the concentration on the auteur series. He thinks there’s already stuff about them in the catalogues, people know what the paintings are like, and no-one’s ever written the way he would like about the later paintings. So I’ve been trying to concentrate on those. There hasn’t really been a large show of the recent work. About five years ago there was one at the Rose Art Museum, at Brandeis, but since then there hasn’t been anything other than the gallery shows.

Patricia is planning to retire from teaching soon. She’ll be taking early retirement and is overjoyed to be working on a series of projects. She’s doing a public garden and is working on the plantings. It’s an enormous project, funded by one of the local flower-growers, which you can see from the freeway. There’s also a new design for a sewage treatment plant that Patricia and other artists have become involved in. And she created the colour scheme for the San Diego Children’s Museum. There’s a bunch of Farber-Patterson sites around San Diego.

NK: Where exactly are they in Leucadia?

RW: Their house is just off a major freeway, between the freeway and the ocean. There’s not much going on in Leucadia; it’s barely a town. There’s a very small post office, and normal California one-storey shops and strips, and it’s very dusty. But there are lots of lovely hills and lagoons nearby and Manny and Patricia spend a lot of time walking around them with their dog Annie. Manny still misses New York. When they moved to California in 1970 they thought they would only be there for a semester. Manny was at a party in New York, where he was teaching at the School of Visual Arts, and there was someone at the party who was teaching painting at the University of California at San Diego and who was coming to New York. He basically offered Manny the job as his replacement, and asked him if he’d take it for six months and swap studios. Manny and Patricia were always planning to move back to Manhattan; they were just hoping to stabilize and get out of debt. But once they moved out there, Manny was asked to stay on after his first semester and take over the film department. Patricia also began teaching drawing out there when they arrived, and Manny wound up teaching both film and painting for years.

NK: I assume it was Manny who eventually hired Jean-Pierre Gorin?

RW: Yes, they met around 1971-72, in Berkeley – at Tom Luddy’s house. Do you know the Michael Goodwin and Greil Marcus book, Double Feature? It’s partly about the Godard-Gorin British Sounds (1969) tour, with transcripts from some of the stops along the way, and it’s also got the screenplay for a film about the Marin County shootout; it’s dedicated to George Jackson. Greil Marcus is a big fan of Manny’s criticism.

NK: It’s nice to discover that people who are themselves stylists – like Marcus and Luc Sante (Low Life, Evidence) – appreciate these qualities of his prose.

RW: You keep finding these things out. I was really pleased to learn that Chris Petit liked Manny. James Wolcott has always been a fan. William Gibson… Harry Mathews.

NK: How do Manny and Kael get on these days?

RW: Better than ever. I think they’ve disagreed about almost every film ever made – except McCabe & Mrs. Miller (1971) – but they’ve been in contact a lot more lately. Once, when Manny had a show in New York, he and Patricia and I drove up to Pauline’s house in Great Barrington together. For the last five or six years he’s been much closer to her, and they’ve been talking on the phone more than they ever did. And Pauline really loves the paintings. For many years she’d never seen them in the flesh, but then she went to a couple of the New York shows, and to the Brandeis exhibition. So they’ve had even more to talk about than movies since they both retired. (3)

NK: I know you are a big fan of Godard’s work. Increasingly his films are harder to find in Australia; they are no longer automatically shown at major film festivals.

RW: Nor here. For Ever Mozart (1996) had about three screenings at the Walter Reade. I’m still extremely Godard-obsessed. Manny has many more reservations. He’s interested in parts of Godard, but he doesn’t care much for the recent films. I sent him a video copy of JLG/JLG (1995) and he told me that he couldn’t take it when Godard started comparing himself to Mozart, so he had to switch it off!