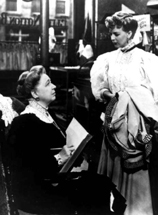 Cincinnati, Ohio, at the turn of the century was a large provincial city. Its German immigrant community was a metonym of the new USA, with families enjoying the broad conviviality of its beer gardens while living under narrow matriarchal respectability at home (1). Ray Schmidt (played by Irene Dunne) is a product of this culture, a lively young woman poised between the contradictory roles of “good girl” and “good time girl” (2), a situation which society will not tolerate for long.

Back Street is the story of the next 30 years of her life, as she contrives to be something of both but finally faces the bitterness of getting the rewards of neither (3). Along the way she has options – she gives up a career and financial independence, she declines marriage to a “good man” whom she does not love. What she chooses is true love and financial dependence – outside marriage. Walter Saxel (John Boles), the man she remains faithful to, is married (his wife is spoken of but not seen until late in the film), and Ray must live in the Back Street of his life. Hers is “true” love, paid for with sacrifice; his is “free” love, licensed by the double standard of patriarchy.

Ray gets occasional bliss and the veil of respectability (her neighbours in the back street believe she is married – one of them even greets Walter as “Mr Schmidt”). She pays for it with shame, loneliness and the denial of motherhood. Each of these “payments” has a twofold consideration: Ray’s story crystallizes the distinction between shame and guilt as cultural regulators – her life is dominated by one, but free of the other (4).

Her loneliness is twofold: long periods of separation from Walter, and the absence of a confidante in her life. When a distressed neighbour who is consoled by Ray confides that she is a Back Street wife, Ray cannot return the confidence. Motherhood is denied to Ray in two senses: she cannot be a mother and she cannot have a mother. She wants a child of her own, but Walter fears the damage this may do to his marriage and his career (he “reasonably” accuses her of selfishness!). And no “good” mother would approve of a daughter in Ray’s situation.

In both the film and its source, the scandalously popular novel by Fanny Hurst, Ray has economic and social options other than life in the Back Street. It may be the devil’s bargain under the patriarchy, but it is a voluntary transaction. We can say that she is repeatedly forced into situations of disappointment, loss, anguish only if we acknowledge that the force comes from within her. She chooses sacrifice, deep loss, as the price for what she wants. Are there words to describe what she wants? “True love” is a paradox; it explains all while it explains nothing. Does Ray get what she wants? Was the price too high? The audience comes away racked with ambivalence. In her article “I Burn For Him” (5), Susan White offers a detailed and carefully argued interpretation of Back Street as a depiction of female masochism – in relation to psychoanalytic theory. I cannot improve on her commentary, and I recommend it to anyone who watches this film. It must be a matter of speculation – it is too late for systematic research – whether the suburban mothers and mothers-to-be who wept silently at the matinee sessions before going home to the housework were consoled in their own submission by such films, or whether they were partially subverted by them, thereby indoctrinating their daughters (the generation who were to grow up with Friedan, Millett and Greer) with rather less conviction, a little more permissiveness, than ever they had been granted.

I have iterated the term “story” of Ray Schmidt to reflect the film’s deceptive simplicity. Gladys Lehman’s screenplay is a linear chronicle; the causal connections between scenes are apparently uncomplicated and/or non-problematical. The film’s pictorial properties (Charles Hall’s design lit by Karl Freund) are recessive. Its metaphors and metonyms are easy to read – some might say “obvious” by comparison with other great cinematic studies of female masochism, especially works by von Sternberg, Ophüls, Sirk.

John M. Stahl’s mise en scène exemplifies grammatical economy, favouring long takes, with few singles and even fewer close-ups (less than a dozen until the culminating scenes) and only two arbitrary camera moves in the entire film (6). Shot-reverse shot is more frequent in later scenes when Ray’s social standing changes and interpersonal antagonisms develop. The result of Stahl’s economy is that his sparing use of expressionist techniques increases their dramatic value and emphasises the significance of chosen points in the narrative.

Audiences today may regard this artful diminishment of expressionism as “old fashioned”, even naive, yet still call it melodrama. Oh, how sophisticated we are not! We must go back in time a little in order to grow up. Some of us use “melodramatic” as a judgmental term, not a descriptive one. Yet melodrama has strong conventions, codes which we need to learn before its exemplars can be read and responded to. Unlike “respectable” mimetic forms such as verse drama, opera and ballet, film melodrama has codes which are populist, not elitist. They are no less complex for that. The mass audiences of three generations ago were able to read them (though it must be admitted we have only inferential knowledge of what meaning they got from the codes and gave to the films).

Back Street meets some of the criteria of melodrama, but not others. It is melodramatic in its emotional “transparency”. The characters in melodrama may be deceived – intentionally or unintentionally – by each other, and some may lie to themselves (as Ray Schmidt does), but the audience is not deceived about their inner lives – their desires and dreads, their obsessions and frustrations, their rare satisfactions and ecstasies. The audience does not have the difficult – though pleasurable – task of making psychological deductions about motives, etc., as they must in tragedies, “problem dramas” and suspense thrillers.

The characters of melodrama are signifiers of social forces; these latter are the proper subject of the audience’s deduction and hypothesising. In melodrama the characters are templates for the tracing of society’s invisible or ideologically dissembled ministers of power, while the narrative unwinds the psychological machinery of their enforcement. Personality becomes the crucible of the culture’s contradictions.

The story line of Back Street contains some examples of the coincidences and parallels which are typical of melodrama: Ray is prevented from meeting Walter’s mother and gaining her approval by her stepsister’s plea for help (the stepsister, a “good girl”, approved by her own mother, has fallen pregnant); when Ray comforts her injured neighbour, another Back Street “wife”, there is tension as she seems about to face up to her own situation – then Walter arrives unexpectedly and she reverts to her role of make-believe wife. In melodrama, as in its oral and literary antecedents, epic and romance literature (7), seemingly fortuitous events unmask the inexorable workings (the “logic”) of society.

Other elements of Back Street are not melodramatic: design and lighting are frequently “flat”, compositions simple and music minimal. Performances by the principal players are restrained and un-theatrical (“realistic”). Given the recent introduction of sound film – less than five years earlier – the portrayals by Irene Dunne (Ray) and John Boles (Walter) are important achievements in the history of screen acting (8).

Narrative tension is comparatively slow: suspense builds within scenes but not between scenes. The what-happens-now is stronger than the what-happens-next. This is in marked contrast to the other great “women’s picture” of 1932, Frank Capra’s Forbidden, which has a story line similar in many respects to Back Street. Capra’s film has a tumescent narrative drive from scene to scene which creates an impression of great pace; the what-happens-next dominates.

The “flat”, “slow” and “transparent” qualities of Back Street (each of these terms implies an unexamined norm) induce a form of contemplation, we are involved in the what-happens-now. Dialogue scenes are often held in “simple” tableau compositions, other narrative elements are covered “economically”: the eponymous back street does not get an establishing shot (implying that it is everywhere?). The startling image of the woman in flames (Ray’s neighbour) gets only one “proscenium” shot – its placement restricts it to the function of narrative information, to be reacted to rather than to be involved with. Involvement is reserved for its aftermath – the confession of a Back Street wife.

When measured by the conventions of screen melodrama – for thus was it perceived, assessed and marketed – Back Street‘s retreat from expressionism exemplifies the artistic strategy of “sparse means”. For Paul Schrader (9), this is the practice which defines the transcendental style in cinema. On the evidence of this film Stahl has more affinity with Ozu, Bresson and Dreyer than with Sirk (with whom he is often compared), Borzage or Ophüls.