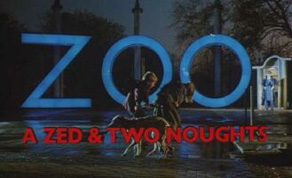 Translated by the author with Michèle Becquart and Adrian Martin.

“I think my cinema is better understood in terms of criticism generally applied to the pictorial traditions and the history of art. Sometimes I feel I’m a hippopotamus in a giraffe race”. (1) In this statement from a 1990 interview, Peter Greenaway summarises two of the most important aspects of his work. Firstly, the predominance of image over plot, which comes from his love for painting and his studies of the fine arts; and secondly, the consequences of his aesthetic choices, resulting in work that is very difficult to categorise within genre or even compare with the work of his contemporaries.

One of his early features, A Zed and Two Noughts (1986, aka ZOO), clearly encapsulates both these aspects, and reveals as well an unusual rhetorical structure. In terms of form, the visual language is rich in symmetries and symbols which reinforce the evolving construction of the scenario. The rigour of the plot is typical of Greenaway’s artistic creations, but here it reaches an almost mathematical precision.

A car accident in front of a zoo brings death to the wives of both its two owners and the amputation of one leg to Alba Bewick (Andrea Ferreol), the driver. While grieving over their women’s sad end, the Deuce twins, Oliver (Eric Deacon) and Oswald (Brian Deacon), begin a scientific investigation of life and death. The evolution of species captures their attention: they learn about it from BBC documentaries and, on the empirical plane, by shooting different animals decomposing, ranked according to their order of appearance on earth or their evolutionary complexity. Along the way, they both start a sexually based relationship with Alba. Following the advice of her surgeon, Van Meegaran (Gerard Thoolen), Alba decides to have her other leg amputated as well. Then she becomes pregnant and breaks the news of impending fatherhood to both brothers without even wondering which one of them is the real father. After the delivery, she realises that she has had two children, so she quickly finds a legless man, Philip Arc-en-Ciel (Wolf Kahler), with whom to start a family. She names him the father in order to complete the symmetry.

Even though the twins finally accept her decision, they remain unsatisfied with the various putrefactions they have shot, and so ask Alba for permission to film the decomposition that will follow her imminent death. Alba’s birthplace, l’Escargot, will be the set. To complete the evolutionary cycle and surrender to their fate – implicitly established from the beginning of the investigation – the twins end up committing suicide and filming their own decay. However, the arrival of snails that feed off the dead bodies causes a short circuit and stops the twins’ film as they envisaged it.

With the Deuce brothers’ death, the plot builds its ultimate symmetry. The movie starts with the death of two women and ends with that of their husbands. The wives are seated in the backseat of Alba’s car, while both men die naked, lying next to each other on a wooden board.

Thus, we notice that the deaths at the beginning lead to more deaths; in an apocalyptic chain, the originary death of an animal ends up causing the suicide of men. Darwin’s thesis (which appears in the BBC documentaries that the Deuces watch) favours the evolution of death over the evolution of life. That is the only way they can explain the death of their wives, over whom they still grieve. Suffering is the film’s central issue, and the only reason why the twins continue with their investigation.

The rotting of an apple – a symbol of temptation in the Christian tradition and one of the main elements in Genesis – will take them to the putrefaction of lobsters, fishes, a crocodile, a swan, a dog and a zebra. An apple and a puppet-zebra decorate Alba’s hospital bedside table.

Within the realm of the image, the two ends of the chromatic scale stand out via the characters’ insistence on evoking black and white animals, especially the zebra. White (the union of all colours) and black (the absence of colour) close another circle which goes through all the colours of the rainbow (in French, arc-en-ciel).

The zebra is the movie’s most symbolic animal. In English the word starts with the last letter of the alphabet that Alba’s little daughter, Beta (Agnes Brulet), recites throughout, as she relates every letter to the names of zoo animals. Van Hoyten (Joss Ackland) asks Venus de Milo (Frances Barber) if the zebra is a black animal with white stripes or a white animal with black stripes. Catherina Bolnes (Guusje Van Tilborgh) wears a slip that imitates the zebra’s skin. The final decomposition we see is that of a zebra. However, this idea was already present at the beginning when, in the accident scene, the car is behind a zebra crossing. So the zebra, physically, is a combination of the beginning and the end, life and death, black and white.

These two colours are very important for the film’s overall, foregrounded symmetry. Every shot where Alba is lying on a bed and the twins are at her bedside is visually structured by a symmetry in which she represents the axis in the middle of the frame. Alba manipulates the relationship between the brothers in these shots, because she is always in the middle. We see her lying in bed almost all the time in a vertical axis, surrounded by people. She only appears in a horizontal position when she is operated on and in the post-operative period. During these episodes, she is all alone and suffering. These opposing positions symbolise the character’s starkly different emotional states; together, they also make up the form of a cross.

The religious aspect can also be seen in the circle – such as the saint’s halo that Alba has over her head in almost all the bed shots. She usually wears white clothes except in one of the final scenes; when she invites the twins to have sex she changes into a reddish-pink nightdress. The halo then disappears.

White is also important in other Greenaway films, such as The Cook, the Thief, His Wife and Her Lover (1989) where it is an essential element of the bathroom. Women who enter this room suddenly appear dressed in white when just a minute before they wore red. The walls, toilets, doors are white and everything seems very clean, the exact opposite to the image we generally have of these places, especially if they are public. In The Belly of an Architect (1987), the main character, Stourley Kracklite (Brian Dennehy), wears white suits almost all the time, creating a contrast with all other characters.

It can be easily seen that all living beings are based upon symmetry. In order to respect this rule, Alba decides to cut out her surviving left leg. She justifies her choice by saying: “It’s got to go”, “It’s dying”, “It’s alone”, and finally concludes by explaining that both legs should complement each other (as in this case they cannot). The twins answer: “Like us”.

Zoologists, investigators, widowers: the two brothers seem to be alike, even if not physically identical. And emotionally, they react differently to their wives’ deaths. One frees animals, the other studies their evolution. Nonetheless, little by little, both their trajectories and physicalities merge. They search for the same things and finally reveal that they were Siamese twins separated during childhood. Their obsession with symmetry is so deep that they ask Van Meegeren to join them together again. Since they don’t manage to convince him, they ask Venus de Milo (who has the name of an armless sculpture in opposition to Alba, the legless woman) to sew special suits so that they can always be next to each other.

The same visual union between the characters reflects itself in the plot. The documentaries anticipate the putrefactions we are going to see later. They teach us about the evolution of species and allow us to imagine how the film is going to end. The ultimate step is the human being, the most intelligent, reflective animal of all. However, as we see in the final scene, snails can be smarter – they manage to ruin the twins’ plan by having them for lunch.

These structures can help us understand what the author aims for when making a movie. As explained by Michael Nyman (the composer who has worked on almost all of Greenaway’s films): “He’s got the whole film in his head before the shooting, he’s a very rational filmmaker”. So we can say that in all his films the plot leads to a fatal end, a tragic destiny which the characters cannot avoid because it is presented as an absolute truth.

In The Belly of an Architect, Kracklite’s illness, the pregnancy of Louisa (Chloe Webb) and the planning for Étienne Louis Boullée’s exhibition must end in the same place and at the same moment: Kracklite dies, Louisa gives birth to her child and the exhibition is inaugurated. In The Pillow Book (1995), Nagiko (Vivian Wu) wants to take revenge on the editor who finally kills himself. Again in The Cook, the Thief, His Wife and Her Lover, Albert Spica (Michael Gambon) has to eat the body of Michael (Alan Howard) as part of the revenge plan of his wife Georgina (Helen Mirren).

The Cook… makes very interesting use of colour, framing and painting. For example, we can assume that Spica represents Judas in Leonardo Da Vinci’s “The Last Supper”, because the characters are always around a table like in the Franz Hals painting we see in the restaurant. In A Zed and Two Noughts, there are many references to Dutch painter Jan Vermeer. For example, Alba is dressed in the same clothes as the woman from “The Music Lesson”, and Van Meegeren is the name of a well-known Vermeer forger. In The Belly of an Architect, there is a homage to architecture and sculpture; and in The Pillow Book, the bodies become the tissue for Nagiko’s paintings.

In Greenaway’s cinema there are manifestations of every other art, but always based on a central structural schema that makes them all serve the same end – the director’s vision. Cinema is a way for him to prove his love for the fine arts while building structures of meaning that are rock solid.

The endings of the four movies cited all contain an essential element: death – one of the most important themes constituting Greenaway’s style. He always spins extremely complicated plots, thoughtfully developed on the basis of a precise visual language. This process results in a very artificial aspect able to communicate the mathematical accuracy necessary to the films.

How is it possible to strip the presentation of death of its customary tragic feeling, and impose the particular idea that it signifies a return to the essence from which all creatures come? For Greenaway, life’s mission is to engender new lives: “I have transmitted genetic material, all I have to do between my daughters’ birth and my death is to decorate my life”. Indeed – but death will always close the circle.