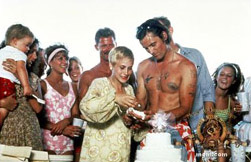 Sean Penn’s The Indian Runner is more an offshoot of ’70s American cinema than an example of the contemporary American indie phenomenon. Inspired from a Bruce Springsteen song “Highway Patrolman”, the film oscillates, like a blues ballad, between uplifting humanism and melancholic despair in an irregular tempo that suggests a less than comfortable resolution. Much of what is great about the film is its combination of stark visuals, an amplified period atmosphere, star turn acting and raw emotion: signature components of the best American cinema of a previous generation.

Set in small-town Nebraska, 1968, under the shadow of the Vietnam War, Penn’s movie explores the moral schism that divides a pair of dissimilar brothers. Joe Roberts (David Morse), a cop and family man having just lost his farm seeks to connect with Frank (Viggo Mortenson), his troubled kid brother who has recently returned from Vietnam. The central conceit of the relationship is the conflicting nature of the two men – the loving domesticated man versus the wild misanthropy of the criminal – voiced in a drunken rage by Frank when he asserts that there are only two types of people in the world “heroes and outlaws”.

Less abstract or neatly rounded as Sam Shepard’s play True West (1980), Penn’s debut feature explores similar terrain by focusing on the loss of ‘self’ involved when such binary masculine spectrums collide. Frank’s humiliation of his wife Dorothy (Patricia Arquette) after she politely rejects his confused sense of romantic intimacy as uncouth behaviour (he says he has some mosquito bites that need itching) provides admonishment for his growing lack of self-definition and violent destructiveness. While his submittal to the role of father and husband only furthers his growing sense of frustration as he fails to reassimilate into a society he doesn’t recognise as his own. Penn’s female characters always seem to get the short shift of the bargain (not out of lack of respect; they are always soothing, tough beauties) as they are usually left to pick up the pieces or absorb the brunt of frenzied male rage. Penn’s universe after all is a masculine one, fixed around wayward men and fuelled by the paradoxical divisions concealed in male identity.

Even the two leads oppose each other stylistically: Mortenson an extroverted ticking assembly of sly grins and virile explosions contrasts Morse’s introspective gentle giant. Meanwhile the casting of Charles Bronson as their bereaved father, Dennis Hopper as an evil barkeep-council, and novelist Harry Crews who in a cameo role threatens Joe by singing a shattering version of “John Henry” while being dragged away by police, establishes a coalescence for subverting male iconography.

Furthermore, The Indian Runner proves to be a compendium of sly movie references. The cartoonish interaction of the players is opaquely rendered like The Last Detail (Hal Ashby, 1973) and there is a certain reverence for antecedent movies exploring the estrangement of brothers. The credits (red on black) are reminiscent of the opening titles of Paris, Texas (Wim Wenders, 1984), while the home movie footage of Frank and Joe rough-housing as children echoes the haunting closure to The King of Marvin Gardens (Bob Rafelson, 1972).

However, as often said, the most striking resemblance of Penn’s filmmaking is the one he shares with John Cassavetes. Like Cassavetes, Penn wears his heart on his sleeve. This after all is a cinema of sentiment, not cynicism or cool manoeuvres. Penn is not afraid to investigate human fallibility in all its ugly manifestations or linger on an awkward moment even if it means sacrificing plot momentum. The Indian Runner is filled with small unforgettable moments of vulnerable people reaching out to each other. The image of a young woman diving at a telephone in hungry anticipation of her boyfriend, or a half drunk father calling his son in the middle of the night to remind him to fix his linoleum kitchen floor are the indelible hallmarks of a humanist. As is the broad array of scene stealing drunks, eccentric nuts and lost souls littered throughout Penn’s films. An inquisitive spinster hovers around Joe as he attempts to wash a car, inquiring about his well being, while a bum loitering in a flophouse hallway is given equal weight to that of the main players when it comes to offering observations on events.

Although the camera always gives precedence to the actor, Penn is not just merely a manipulator of theatrics. He conjures up superb images rivalling anything in modern American moviemaking. The swaying light from a paper boy’s bike as he winds his way up a street to a cop stooped over a step with the remains of an entire packet of cigarettes stubbed out at his feet, immobile with bad news he is forced to deliver, evokes a lingering sadness. There are also two fully fledged car chases complete with grinding axels and helicopter camera deployments while an extraordinary composition defining the human waste involved in a pointless shootout, captures a dead man laying in the snow like a cheap-Christ. The camera in slow motion registering his last breath before it evaporates against the cold winter landscape.

The haunting soundtrack by the late Jack Nitzsche (with David Lindley) evokes a rich mid-western atmosphere, while Penn cites music from the period wonderfully, integrating the sounds of Traffic, Jefferson Airplane, Quicksilver Messenger Service and The Band with measured assurance. Moreover, music and sound become important motifs for impending violence, with the increasingly monotonous rhythm of a bouncing basketball or a construction site pile driver often used to convey Frank’s imminent self-destructive behaviour.

The audacity Penn shows as an actor is wonderfully organised around the ebb and flow of his environment. As a director he probes, fully prepared to exhaust actors for spontaneous results. The incorporation of comic and tragic elements in many of the scenes has an anarchic disorientating effect. Joe’s announcement to Frank that their mother is dead goes from being a dramatic confrontation to a sudden reunion of warmth and wordplay. In some ways The Indian Runner is a film about the terrible burden of time. Joe’s attempts to hang onto something that has long passed can also be seen as Penn’s philosophy to American filmmaking. The beautiful dedication to Cassavetes and Ashby apotheosises this reverence. Yet, while Penn borrows from the past, his debt remains our joy as we bear witness to the glorious pay-off.