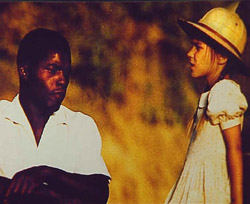 Chocolat is a semi-autobiographical film that functions as a political allegory examining gender, age and colonial relationships. Claire Denis has employed the term Chocolat for its 1950s slang meaning, “to be had, to be cheated”, and therefore the word’s association of “to be black and to be cheated” (1). Chocolat sensitively portrays a young woman’s return to her native home in Africa which conjures memories of French colonial life on an outpost in Cameroon in 1957. It is the first in a trilogy, followed by S’en fout la mort (No Fear, No Die, 1990) and concluding with J’ai pas sommeil (I Can’t Sleep, 1993). The film is important both because it’s Denis’ directorial debut and because it’s portrayed from the perspective of a female ex-coloniser. Prior to this Denis had worked with Jim Jarmusch on Down By Law (1986) and Wim Wenders on Paris, Texas (1984) and Wings of Desire (1987). Denis credits their influence on the style of this film, as well as the Japanese films of Ozu and Mizoguchi. (2)

The film’s formal structure prioritises the role of memory, enabling the narrative to explore the problematic dyadic relationships of a past colonialism. Conveyed with a dry sense of humour, Chocolat opens with the adult, France Dalens (Mireille Perrier), watching an African man and his son indulge in the warm waters and soft dark brown sand of the African coast. France later accepts a lift from this man, and her childhood memories are conjured by the landscape. Colonial life is then examined through the visually detailed portrayal of the people and events of everyday life seen through the eyes of the child France (Cecile Ducasse), living with her young parents, local administrator father, Marc (François Cluzet), and mother, Aimee (Giulia Boschi). The central figure of France’s memory is Protee (Issach Bankolé), their house servant and her only friend. The crash of a plane in the nearby mountains brings unexpected houseguests whose arrival shatters the evenness of Aimee and Protee’s relationship, a relationship burdened by intense mutual but unattainable desire.

Denis employs the power of the visual to convey a plethora of information in an instant and to create a strong emotional impact. Silent observation becomes a powerful and highly articulate space. The vast silence of West Africa dominates the narrative. Stylistically this is conveyed through long shots laboriously panning the sparse West African landscape. These shots are marked by the absence of a musical soundtrack traditionally employed to apologise for the absence of naturally occurring diegetic sounds or dialogue. South African musician, Abdullah Ibrahim, composes a selectively used musical soundtrack. The extended shots of a silent landscape run parallel to the silence shared by Protee and France, both culturally disempowered subjects – France as a child; Protee as an African servant. Silence is a powerful tool as it allies France and Protee in a mutual position of astute observation. Their shared understanding is further emphasised by France’s quickly considered answers to Protee’s mysterious riddles. The silence creates the space for contemplation of the complex nature of diasporic identity, the result of colonialism.

Although Protee is seemingly rendered without voice, except in limited interactions with the young France, his is the most powerfully articulated character in the film. His haunting power and protests remain long after the close of the narrative. The fragility of a carefully maintained facade that governs the colonial code of conduct is marked on the figure of Protee in terms of his compromised emotions and reactions. Protee’s dignified manner, humility and disciplined negation of Aimee’s sexual approaches expresses the underlying power structures of this code and, in turn, its fragility. Vincent Canby, of The New York Times, describes Protee as possessing, “a splendid physique and the manner of a prince, someone taken hostage in war, waiting to be ransomed.” (3) Expressed in this colonialist description, is the potential for Protee to be seen as an exotically beautiful export for consumer consumption. However, alongside this image of Protee’s beautiful physicality remains a strength of dignity, humility and resistance that the spectator witnesses as an equally important part of his colonised identity.

Raised by missionaries into a white colonialist culture, removed from his cultural and racial heritage and emasculated by the domestic duties he performs, Protee is a liminal figure trapped between two cultures. This is clearly signified by the arrival of Luc (Jean-Claude Adelin), a young lapsed priest who lives, eats and showers outside like the native servants. Luc threatens Protee, upsets the fragile equanimity, and induces Aimee’s betrayal of Protee and in turn Protee’s betrayal of France. This moment of betrayal explains the transformation in France’s gaze from the innocence and intensity of a child to the cynical wary gaze of an adult remembering and re-examining a complicated past.

Representative of diverse cultural spaces, food is an important motif in Chocolat. In the middle of the wilderness, Protee prepares for France a snack of live black ants on bread and butter, which she eagerly devours. Depicted early in the film, France’s diasporic identity is articulated in this scene; she is the result of a combination of French colonial and African influences. In a later companion scene, set at the dining table in the house, France feeds Protee soup. This sense of camaraderie is soured when Protee eats a live insect at the dining table and France, embodying a colonial voice, mocks him as a disgusting native. The differing colonial powers that have marked Africa are humorously represented through food. Aimee fights with the African cook to have French fare prepared instead of his usual stodgy English meals. Immediately after this fight, an old English colonist calls in and Aimee is found begging the cook to again prepare his traditional English meals.

The film opens and concludes with a contemporary conversation between adult France and an African-American man, Mungo Park (Emmet Judson Williamson). Divulging that he has immigrated to Africa to claim it as his home, Mungo attempts to congenially question France about her own situation as he drives her to a destination in his car. France’s answers are so forced and reluctant that she appears as diffident towards Mungo as her mother is to Protee. Mungo tells France that when he first arrived he wanted to call everyone brother but quickly realised that to be African transcends biological assumptions. His dispossession is emphasised when he tells France that his African wife threw him out because he was a pain to live with. The irony Denis constructs is that Mungo is as much an outsider in Africa as is France, and that Mungo is even more of tourist than he determines France to be, given her childhood reminiscences. Mungo declares that France’s scarred palm determines that she has no past and no future; this is her scar, along with the scar of the guilt of colonialism. The figure of Protee completes this triangle as he is equally a diasporic subject, marked by the scar of humiliation. The shared scars of colonialism forever bond Protee and France.

In Chocolat the view of black Africa is omitted in favour of colonial experience relayed from a white female perspective. Clarity and authenticity of feeling reveals many truths about identity, especially in an African postcolonial culture. It is the horizon that Marc defines for France as a child – a perceived line that vanishes as it is approached. The effects of colonialisation are complicated and enduring. The narrative explores the transgression of these imaginary boundaries that govern identity and white knowledge of Africa.