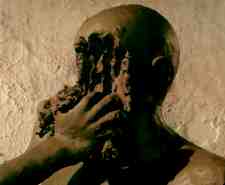 Paint in the leaves, the wind,
insects buzzing in the summer heat,
and then wait … for the bird to sing.

The Czech animator Jan Svankmajer has been making short films since the 1960s – with a few longer ones thrown in (Alice, 1987). Throughout his career, he has been preoccupied with images of alchemy and magic, a focus he shares with filmmakers like Derek Jarman, Kenneth Anger and Harry Smith. These themes are familiar to the city of his birth, Prague, where he has darkened and expanded on the legacy of Zeman and Trnka’s puppet film and experimental animation tradition.

Svankmajer previously worked with drawing and collage. He had studied puppetry, worked with the Semofor Theatre, the Cinohernl Klub and the Laterna Magika before he came to film, to which he brought the methods of a plastic artist. In this sense it is more appropriate to approach his work the way you come to a canvas, an objet d’art with Punch (and Judy) rather than the way you come to a story.

With his continually growing vocabulary of technique and objects Svankmajer mines the concealed, with an anger and a sense of sabotage, to unlock surreal and ambiguous mythical vistas. His metaphorical approach, as with many creative artists, situates him on the dark side of allegory, tapping the unconscious, a place where critique and dissent were able to creep out from under the gaze of the Communist Party’s Thought Police. Svankmajer’s work shows him to be deeply attached/connected to the history of his place, his country, in a way that keeps him to true to himself.

Dimensions of Dialogue (1982) seems inspired by the constructions of Guiseppe Arcimboldo, such as the faces out of fruit (Vertumnus, 1590) and fish (Water, 1566). Svankmajer has said that in this film, objects “act out, in condensed form, the process we are witnessing in this particular stage of civilisation, the passage from differentiation to uniformity”. It is instructional that it is everyday objects that are confronted, devoured, spat out and homogenised, through a series of metaphors of colonisation, to an endless repetition of cloning operations. This is our digital world laid out in 1982.

The stage for The Ossuary (1970) is the historic Sedlec Ossuary, which was built in the nineteenth century from thousands of skeletons of victims of the Black Death plague. Commissioned as a documentary, the soundtrack on the original film featured commentary from a guide promoting the party line. Svankmajer has replaced this with a rendition of Prevert’s poem, “How to Make the Likeness of a Bird”. This change is made even more absurd in the English version where we can read the poem as a step by step construction in the subtitles. It reads like a lyrical version of Svankmajer’s own strategies and approach of re-animating the frozen in nature. Whether it be a skull, stone or the material, texture and objects that we encounter in our daily grind. Svankmajer attacks such collected material with a sculptural sensibility, teasing out and bringing back to life to what already resides in the object. This way of seeing also reminds me of some of Italo Calvino’s short stories.

Politics is closer to the surface in The Death of Stalinism in Utopia (1990). It was made after the “Velvet Revolution” of 1989, and is constructed of images and material appropriated from postwar Czechoslovakia, embracing Gottwald’s 1950 institutionalisation of Stalinism, the Dubcek period and 1968. The film is subtitled as “a work of agitprop”. The film is a work of accounting through image and technique the strategies of political abuse and erasure. Through the materiality and dance of the objects and images the memory of those that witnessed and experienced that history is reclaimed.

Down in the Cellar (1982) follows a young girl who has to go to the cellar on an errand. It shows the child facing her fears and fantasies with courage, a tension with which we are all confronted as audiences of Svankmajer’s films. Perhaps he is exploring the fertile ground for his feature length Alice (1987). Its animation is minimal, but again it is the inanimate natural rustic everyday potato that is brought back to life, reanimated.

The screenplay for Food (1991) was originally written in 1970, and, like Dimension of Dialogue it comes in three parts: Breakfast, Lunch and Dinner, a kind of absurd survey of anti-manners and the dysfunctional social relationship with food and eating. It critically predicts the McDonald’s-isation of food and also brings to mind aspects of Chaplin’s Modern Times and the shoe eating scenes in The Gold Rush. Again this repetition, tension and permutation between two elements is present in a number of Svankmajer films (such as The Last Trick, 1964). Also, like a lot of his work the stage-like set is reminiscent of the early cinema, especially the trick films Georges Méliès.

Svankmajer occupies himself with the re-construction and reconstitution of lost, denied and sabotaged memories and the empowerment and force that they bring up when they resurface. Such memory can be personal (Down in the Cellar) political (The Death of Stalinism in Utopia) interpersonal (Dimensions of Dialogue) social (Food) or historical (The Ossuary).

Svankmajer’s films play with the way that memory structures are embedded in the unconscious. Relationships of images often seem bizarre, surrealistic, absurd, unsettling and illogical when brought out of the cellar to the cold hard light of a materialist day. Svankmajer intuits that these magical relationships are embedded in the natural and everyday discarded objects that we encountered in childhood and move past every day. They are in there. He has spent a lifetime conjuring them out of everyday’s dark hat (his ever-expanding collection of objects and materials) because that, in essence, is what memory is.