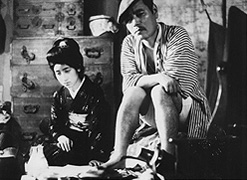 As Yasujiro Ozu’s 35-year long career as a director stretched from 1927 through 1962, it might not seem unreasonable to look upon his 1933 silent film Passing Fancy (Dekigokoro) as an “early” work. Yet by the time Ozu made Passing Fancy, he had already passed the mid-point of his lifetime output – this film was his 29th out of a total of 54 (1). By 1933, Ozu was already a well-seasoned professional, and Passing Fancy was just one of three masterpieces he filmed during that year (Woman of Tokyo and Dragnet Girl being the other two). Of the three, it was Passing Fancy which garnered the most contemporaneous acclaim, winning the prestigious first prize from Kinema Jumpo.

Passing Fancy marked a new phase in Ozu’s career. His earlier films had dealt primarily with college students (and recent graduates), young married couples, young “salary men” and their families, and good-hearted young gangsters. With this film, Ozu initiated a series of works that focused on the lives of the working poor. In Passing Fancy, as in most of the other films of this series, the focus is on a character named Kihachi, played by Takeshi Sakamoto (an actor who had appeared regularly in supporting roles in Ozu’s films since 1928).

In Passing Fancy, Kihachi is the middle-aged single parent of a spirited young son, Tomio. He works at a brewery with his friend and neighbor, Jiro. After Kihachi befriends an unemployed, homeless young woman named Harue (under the rather disapproving eye of Jiro), he convinces another friend, Otome, to give Harue a job at her restaurant. Kihachi has romantic designs on Harue, but she has lost her heart to the younger and better-looking Jiro, despite his patent distrust of her. When Otome beseeches Kihachi to convince Jiro to propose to Harue, Kihachi agrees – but afterwards he becomes morose and even more irresponsible than usual, skipping work and drinking too much.

After Tomio’s classmates tease him over the fact that his father is illiterate and shiftless, he goes home and aggravatedly plucks off all the leaves from his father’s prize possession, a bonsai tree. When Kihachi returns home, he is confronted not only by the wrecked bonsai, but by a son who derides him for his lack of education and laziness. Tomio withstands cuffs from his father without shedding a tear, then furiously begins slapping his father over and over. Kihachi patiently sits through Tomio’s attack, and afterwards, Tomio bursts into tears. At last father and son are reconciled.

Meanwhile, Kihachi’s attempts at matchmaking succeed only in irritating Jiro. When Tomio is stricken with severe gastro-intestinal distress after eating an immense quantity of candy, bought with money given to him by his father, Jiro softens slightly towards Harue, due to her dutiful tending of the sick Tomio in the hospital. Kihachi worries over how he can possibly pay the bill for Tomio’s hospital stay. Harue offers to raise the money, distressing Jiro, who realises the drastic steps she would have to take in order to raise such a large sum quickly. Jiro decides that he will come up with the money to help out his friend. Jiro convinces the neighborhood barber to loan him the needed cash, and promises to re-pay it as quickly as he can – by taking a comparatively well-paying job in faraway Hokkaido. Harue is distraught at the fact that she and Jiro will be separated just as they have come to a mutual understanding. Kihachi decides that he will take the job, in place of Jiro. Meanwhile the barber, having found out that borrowed money had been used to pay for Tomio’s medical care, says that he can wait as long as necessary for re-payment. Nevertheless, Kihachi insists on going, leaving Tomio with Otome, reassuring her that Tomio shouldn’t require much attention. Kihachi boards the boat to Hokkaido, but before it goes very far, decides he misses his son too much and jumps overboard and begins swimming to shore.

Squeezing almost any film’s narrative into a few sentences will cause some distortion of both its content and its form. In the case of Passing Fancy, a bare plot summary is particularly misleading. The bare plot outline shows its melodramatic Hollywood roots far more than the actual film does (2). Despite ample dollops of pathos and melodrama, this film is essentially a comedy. Even in its most serious moments, Ozu can’t resist comic touches. While Tomio lies ill in his sick bed, Kihachi borrows the cold compress on Tomio’s forehead to cool off his own. When asked by Tomio’s visiting teacher what made him so ill, Kihachi (unable to remember the name of Tomio’s ailment) details its cause with super-abundant detail (3). When Kihachi and Jiro argue over just who should go to Hokkaido to work off the loan, Kihachi (running short of rhetoric) sucker-punches Jiro. Indeed the outline above has no place for the film’s lengthy comic overture – which has nothing to do with the central plot, but does set the tone for what is to follow.

In this prologue, a mislaid coin purse makes its way through the audience attending a ballad-chanting performance – each person discarding it in turn when they discover it is empty. When the coin purse reaches Kihachi, he initially discards it too, but reconsiders when he realises it is in much better shape than his own. After Kihachi transfers the meager contents of his old purse into the new one, he tosses away his old one – which then passes through the crowd in reverse order, until it reaches the starting point of the first coin purse. Even this prankishness is insufficient for Ozu. The same audience member who initially found the lost coin purse is found by what would appear to be some particularly aggressive fleas. These fleas then pass through the crowd too, albeit more dramatically than the purse did, and eventually reach even the balladeer himself.

One hears much idle talk of Ozu’s “unmoving camera”, but, in reality, his camera was never particularly static. The camera-work in Passing Fancy is a bit more restrained than in some of his earlier films, but still features a few well-placed pans, and even a curious combination of pan and tracking shot at the outset of the final shipboard scene. But even these “static shots” are not truly static, unless considered in isolation. The average shot length is just around four seconds (4); as in his later films, Ozu’s camera is constantly in motion, flipping from one participant in a scene to another often placed in a position carefully matched to that of the first. Similarly, when a character stands, Ozu shows the beginning of the process in one shot, then cuts to a more distant shot for completion of the action.

Although Passing Fancy is technically a silent film, it has almost 400 intertitles, and only a handful don’t contain dialogue. Ozu’s use of intertitles is often calculated to throw his audience off-balance. Indeed, the first intertitle of the film (“A geisha says she’s in love with her customer, and the customer says he’ll come again, although he won’t”) comes before we see a single image. The second shot is a pan across a crowd, which comes to rest on the as-yet unidentified Kihaichi. The third is a long shot of a man at a lectern on a stage, with a young woman cradling a samisen positioned to the side of him; only now do we guess that the first intertile is text from a performance of some sort – and not some sort of extra-diegetic motto for the upcoming film.

Subsequent intertitles are also often used in an unexpected fashion. We often “hear” a character before we see them speak (or even before we see them at all). For instance, both Jiro and Otome are introduced by dialogue before we ever see them (there are seven shots between what seems to be Otome’s first utterance and her first close-up).

More than any other film by Ozu (or perhaps anyone else either), Passing Fancy has a surprisingly fractal-like character. Action on the large scale is also seen on the smallest scale. The entire film explores the character of an individual, Kihachi, who is both impulsive and indecisive – who decides to do something, then draws back and then, perhaps, does something other than what he initially planned to do. We see this in the first scene, in which he first tosses away and then appropriates the coin purse. We see it at the end, when he decides not to go all the way to Hokkaido after all. However, we also see this same aspect of Kihachi repeated over and over again, simply in the way that scenes are put together. Over and over we see Kihachi prepare to leave a scene, move most of the way to his exit point (a door, a street corner, etc.), suddenly return to near his starting point, and only then complete (or appear likely to soon complete) his action. Perhaps as a bit of sly visual humour, this behavioral pattern is shown to be infectious – before the film has ended we see both Tomio and Jiro do the same.

Up to this point, I have treated this film as if it was solely the work of its director. Although Ozu is an “auteur” if ever there was one, the contributions of his highly talented actors greatly heighten the impact of this film. Takeshi Sakamoto had appeared in most of Ozu’s films since 1928, but always in supporting roles – comic bosses, butlers, uncles and the like. As Kihachi in this film (and its successors), he showed an expressive range that went well beyond what he had done previously. He portrays equally well Kihachi’s warm-heartedness and his obtuseness. Tomio Aoki (under the name “Tokkan Kozo”), as Kihachi’s son Tomio was surely one of the most talented child stars ever to appear on film. Around ten years old when this film was made, Aoki had been appearing in Ozu’s films ever since 1929 (5). His Tomio is not only canny and determined, but sensitive and affectionate. Choko Iida was the wife of Ozu’s first long-time cinematographer, Hideo Mohara, and she too had been a staple in Ozu’s films since the late 1920s, often in rather Margaret Dumont-esque parts. Her successful appearance as the kind-hearted restaurant owner Otome here was the launching pad for her subsequent leading roles for Ozu, playing working-class women in The Story of Floating Weeds (1934), The Only Son (1936) and Record of a Tenement Gentleman (1947). Despite never getting a shot at playing an even slightly “glamorous” part, she was one of the major assets of Ozu’s pre-war cinematic repertory troupe.