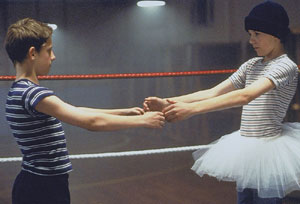 A delightful film about growing up in the midst of the miners strike in North England in the early ’80s. Billy Elliot, the son of a miner wants to be a dancer. While mourning the memories of his beloved deceased mother, looking after his senile grandmother and being a third eye inside the realities of the strike, Billy Elliot is a boy who knows what he wants. Thrown in the middle of a ballet school by chance when the school is forced to relinquish their space for a soup kitchen for the strikers and is forced to share the dim lights and the boxing school’s rough floor, Billy exchanges his boxing gloves for a pair of ballet shoes. After he proves to be helpless at boxing where he dances around rather than punches, Billy is not afraid to spend his 50 pence on a newfound passion, learning ballet.

He keeps his dancing a secret from his male dominated family, who spend their days picketing and running away from the policemen’s batons. Lacking the feminine encouragement of his mother whom Billy misses a great deal every time he strikes the keys of the piano, his only support comes from the warm eyes of his senile grandmother. She often wanders off into oblivion while muttering with pride her past and missed opportunities of becoming a ballerina herself. She seems to be the only one who might understand the passion he embraces.

For him his dancing becomes everything. He steps outside his turmoil world by becoming Grace Kelly and dancing on the cobble stones streets of the small mining town to vend off frustration. Once he realises that being a dancer doesn’t make him gay, Billy is determined to audition for the Royal Ballet School under the strict regime of his feisty ballet teacher, Mrs Wilkinson, played by Julie Walters, whose zest for teaching comes alive when she discovers Billy’s natural talent.

Once Billy’s father discovers that his son’s 50 pence was not spent on more manly pursuits, all hell breaks loose and he bans Billy from taking the lessons. Humiliated and enraged, Billy’s aggravation deepens alongside his relationship with his best friend, Michael, himself troubled by his own coming of age, as a closet cross dresser. Amusing to see Michael not afraid to wear his sister’s school uniform or apply lipstick on Billy’s lips, Michael urges Billy to be himself and follow his dream despite his family’s opposition.

Mrs Wilkinson offers to train the boy in secret and for free. Their hard working routine nearly breaks the both of them as their emotions run high and truths come out. Although rough and pushy, Mrs Wilkinson exudes strength into Billy and helps him to see the bigger picture and opportunities his dancing might create for him; out of the miners pit and onto the world’s ballet stage. Our hearts stop when Billy misses the audition as a result of Tony’s arrest. Frustrated yet refusing to be beaten, Mrs Wilkinson attempts to change Billy’s father’s mind by telling him what a chance Billy is missing out on. Tempers run high and tongues unlash hidden truths forcing Billy to turn deaf at all the abuse exchanged between the feisty teacher and his stubborn family. The fuming older brother Tony humiliates him further by throwing the teacher out whose middle class status inflates his anger more.

Upset by his family’s ignorance Billy’s steps get feisty in a dance meant only for his best friend Michael but witnessed by his father whose head becomes clear and determined to help Michael get to the audition. Almost becoming a scab and letting his other son down, the father with the help of the other miners raises the funds for the gruelling audition. Twenty years later we see Billy turn into a swan in the lead role under the electrifying lights of the West End Stage. Proud family eyes watch him from the audience as the curtain unveils Billy’s grace.

A gut wrenching film which doesn’t stop the tears from flowing on anyone’s face. It embraces potent statements about the political and social signs of the times and family values. Billy’s character, played by a very talented young actor, Jamie Bell, gives the film its main strength but is helped along by supporting roles from the town characters and heart pumping performances by Julie Walters as the teacher, Michael (Stuart Wells) and macho family (the father Gary Lewis and brother Tony played by Jamie Draven) and let’s not forget the fragile grandmother whose reality is drowned by her senile behaviour played by Jean Haywood.

The film is very moving, in them midst of the miners’ struggle showing the town’s division between strikers and the scabs alongside the troubled youth’s difficulties in coming of age. The adults’ roughness trains the young people to be more resilient and gives them maturity beyond their years which is nothing to sneeze at but admire.

Their compassion towards their families’ flaws is very touching and when Debbie tells the truth about her father’s adultery or Michael about his father’s cross-dressing or Billy about his brother’s pot smoking habit we are impressed by their attitudes about their realities and lack of judgment.

Many poignant scenes haunt this film and the most impressive of all is the compassion shared by the entire community in times when every man could look out for himself only. Billy’s electrifying dances brings softness in contrast to the violent strike and police arrests. It was refreshing to see the importance of the family unit and their devotion to one another in the middle of all the turmoil. The Christmas scene is most heart-rending when they try to be the jolliest despite all the shortcomings. The Grandmother’s frail mind and body wrenches out compassion from every audience member. The father’s will to support Billy’s talent while trying stay loyal to Tony and the other miners, nearly breaks him apart when forced to make a decision to go back to work and be a scab.

The film is filled with emotional scenes where the conflicts are so tense that we can hardly remain in our seats and burn with anticipation. The director Stephen Daldry manages to pace the tension so brilliantly and fills our hearts with emotions from scene to scene. Often dialogue is non-existent to promote tension and we are stirred up visually. When the strikers must go back to work and we see them descending down into the pit together, while Billy’s acceptance into the Ballet School paves his way up, no words are needed to make us feel their reality. When he walks past the little girl whose future we see clearly as she just hangs around the back alleys of the miner’s ghetto.

His farewell kiss to his best friend Michael strengthens their friendship further. What I liked the best was how the film didn’t spare the middle class and showed us their despair and insecurities. Debbie the daughter of Mrs Wilkinson is very mature when she shares the tales of her family’s breakdown with Billy. Her mother’s frustrated life led on by her husband’s drinking binge only brightens up when she takes Billy on as her protege rather than the other ballerinas including her daughter. Her endurance during her failed marriage motivates her to help Billy. Finally when we least expect it Tony’s changed of heart in supporting Billy’s dream as he sweats with hope when the letter of acceptance arrives. When Billy departs and Tony realised he never uttered many kind words to his younger brother, we get all get lumps in our throats to see him mutter the words: I will miss you which perish in the wind, past the window of the bus as Billy cannot hear them. We are left pondering if Billy will ever understand the meaning of his brothers’ farewell words but his presence at the premiere twenty years later confirms them.

A very touching film about family and life in a desperate town, Billy Elliot gave us the chance to see that unity and love can overcome almost anything and that dreaming can take you further. The film showed us that making the right choice despite the pressures around is about having courage. Being yourself in a world that at first won’t let you is often painful at the start but fulfilling in the end.