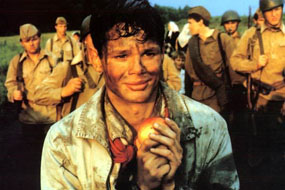 In a 1993 interview Agnieszka Holland stated, “I don’t feel at home in Poland… in a sense I’m homeless, and that is the most natural condition in the world today.”  When she made Europa Europa in 1991, a German/French co-production shot in Poland, she literalised this statement. It follows the (true) picaresque adventures of Solomon Perel (Marco Hofschneider), a German Jew who survived the Holocaust by concealing his identity. The film follows him back and forth from a small German town to the Lodz ghetto to the Russian front to the heart of the Reich.

Is Perel a Holy Fool or hypocrite? The coincidences in the story keep mounting: Perel, captured by the Nazis, is able to convince them he is German – he is about to be denounced by Zenek, an angry young Pole, but the latter is accidentally run over. Perel attempts to rendezvous with the attacking Russians, but meets them just as they are surrendering, and is acclaimed as a hero by the Germans. Perel fakes his way out of a physical exam to avoid having his circumcision revealed. An Allied bombing of a Nazi school kills an administrator moments after he announces plans to send away for Perel’s family documents. And towards the end, about to be shot by a concentration camp survivor, Perel is saved when he is recognised by his own brother, another survivor. If he is a Holy Fool, then everything that happened was pure luck, divine providence. (A glance at the sky before he claims to be a pure German attests to this.) In essence, Perel would seem to be the very definition of hypocrisy: a man who accepts the identities others see in him. Yet Perel is a Jew who has lied countless times as a defence and as a means of survival; through this, ironically, he finds his way to truth and manhood and finally embraces his identity. And, at the end, he has the freedom to pee with his brother.

This point is a key as Perel’s circumsised penis is the secondary character of the film. Right after the opening titles, the baby Perel is being circumsised, and his voiceover claims to remember that moment. The irony is that this moment will mock him through his journey:  when he is with the Hitler Youth, he must bathe and urinate secretly, and he cannot make love to his Nazi-obsessed girlfriend for fear of being discovered. Part of Perel’s identity is enforced by his hidden penis – likewise, this is also reflected in a dream of Hitler, with his hands over his penis, because he, too, has become a hidden Jew.

Holland’s statement cited above – Perel is the Jew, without borders, but enclosed by the bounds of his circumcision; in a sense, history encloses him, and he merely gets buffeted around within it. Europa Europa seems to be an allegory for the Jewish experience of modern Europe – the uprooted Perel searches for a home, taking refuge in alternate ideologies and national identities. Indeed, the double Europa of the title refers not only to the divided Europe decimated by totalitarianism, but also to the divided morality of Europeans, torn between culture and barbarism.

Yet this leads one to question how Nazism can be portrayed as a “fiction-of-reality” on film. Two years before Steven Spielberg “popularised” the Holocaust in Schindler’s List (1993), Europa Europa similarly held up the survivor as the Ideal. Spielberg’s film (while widely praised) was vilified in some circles due to its concentration on the survivors, thus ignoring those who had died. In a sense, this gives a “happy ending” to a story about the Holocaust. Does Europa Europa equally give a happy ending to a tragic event? (Leaving aside Spielberg’s obvious Hollywood bathos towards the end, and Holland’s Eastern European sensibility, easily comparable to her mentor, Andrzej Wajda.) Should fiction come under a different kind of scrutiny than documentary, and therefore be more amenable to a satisfying conclusion? Both Alain Resnais’ Night and Fog (1955) and Claude Lanzmann’s Shoah (1985), for example, had narrators that spoke about those who died, not the way they survived. (Europa Europa also has a tenuous connection to Lina Wertmuller’s Seven Beauties [1976], a comparatively Candide-like story whose protagonist will do anything to survive.) Any film dealing with the Holocaust begs the question: Is it possible to represent Nazism, and, in a sense, history, accurately as a fiction?