If you should ever come to know a film critic who is crazy not only about the A-programme screened at the International Shortfilm Festival in Oberhausen but the location itself, be sure: he or she has never been there! By this time, I guess it is absolutely pointless to question the quality of its curated programme, though one could still be of two minds about the daily discussion forum. The location, no doubt, gives you a strong impression of a provincial hardboiled German city, packed with architectural mistakes, the worst-dressed citizens, tacky shops and horrible restaurants. I have visited now Oberhausen for the third time and again I happened to overhear a citizen of Oberhausen asking his or her companion, spoken in solecistic German:

“Strange people around, what is going on?”

“I don’t know, never been there, but people look weird, I think.”

So, just imagine a shopping street and a small cinema complex located close to the central station, nestled right in the middle of the street, with one ice cream parlour, an American bar, a betting office and some boutiques offering clothing you never imagined being the “dernier cri”. So, festival visitors from all over the world and citizens of Oberhausen are easy to tell apart, packed in front of the cinema after each programme.

Nevertheless, I have to admit that the city Oberhausen shows every year an immense extraversion and sobriety hosting a very special line of film business. It is still a very political one, regarding the statement of Festival director Lars Henrik Gass:

More than ever film festivals are a form of publicness, more than at the time when they were primarily a market. But exactly at the moment when film festivals could establish a new publicness for film, publicness as we once understood it is disappearing.

Further, he writes provocatively: “On the Web 2.0, people behave exactly the way they have learnt in the political sphere: they vote. Knowledge is not necessary; having an opinion is enough.”

So, film festivals last and the only task is going to be a proper screening for a favourable audience?

The programme was mixed with professional “opinions” like usual. Here are some I want to accentuate.

O sonho da casa própria (Veiled Dream, 2008) by Cao Guimarães, going into the matter of what do a marriage and a construction site have in common. It is all a question of veiling: whatever is going to be behind the curtain and what will happen if the veil is lifted. A constructing area and a bride: it takes only a few minutes and it is getting harder to tell them apart. A real rouser for all romantics!

Domenica, 6 aprile, ore 11:42 (Sunday, 6th April, 11:42 am, 2008) by Flatform focuses on movement, action and the environment: a static landscape in the bright sun, a few people on their way, followed by light spots, building up a tension because the spots are getting closer in their movement and the question, “What will happen?” The best question asked in stringent storytelling, anyway. 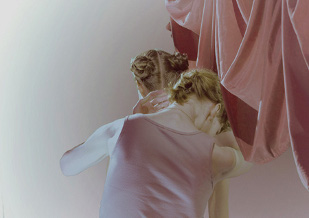 My Absolution (2008) by Victor Alimpiev, a masterpiece when it comes to dance film. Two female dancers, showing their tight hairdo, doing their études but the camera focuses only on their back. The noise of their feet gives you a small impression of what exactly they are rehearsing. But the camera remains merciless. The two heads and hands will be the only thing to see, aside from a pink curtain. Hard breathing and stamping feet remind of the physical struggle.

“Using Ketamin makes you feel as though your perceptions are located so deep inside the mind that the real world seems distant. Movement is extremely difficult and a user may not be aware that he or she has a body at all. Heavy users report a rapid increase in tolerance.”

Zwei Projekte von Friedrich Kiesler (Two Projects by Frederick Kiesler, 2009) by Heinz Emigholz. The director shows, as usual in his work, that photographing a building (in this case the model of an “Endless House” designed in 1959 and the building “The Shrine of the Book”) can be fun to watch, sensual, educational, strict and delirious at the same time.

Terminal (2009) by Jörg Wagner uses a time-lapse camera to show a ballet of workflow at a container terminal. Sounds boring and “seen before a thousand times”, but Wagner manages to edit a completely organic and bantering new vision of that theme.

Luft (Air, 2008) by Natalia Stürz summarises the respiratory sounds of a newscaster. Sounds philosophical, looks disturbing. The sound of breathing between two sentences, maybe between two breaking news items? Something essential in human life, but in this case also the product of professional breathing technique.

Echo (2008) by Magnus von Horn was able to divide the minds. “Fantastic acting”, stated one side. “Look, I am able to do a feature”, stated the other, ironically. I want to consider it optimistically and I was impressed by the enormous tension between the actors. There is not enough substance in the plot to serve a minute longer and it is directed to its maximum. Two boys have murdered a classmate. The detective forces them both to experience the progression of events and it turns out he is mainly responsible for a murder that happened too easily.

Matsumoto Toshio is considered as a pioneer of avant-garde documentary, experimental film, multimedia and video art in Japan. As Matsumoto described his work in a wonderful detailed interview with Aaron Gerow:

We have to do more to irritate and disturb modes of perception, thinking, or feeling that have become automatized in this way. I did several kinds of experiments from the 1970s to the 1980s that de-automatized the visual field. But when image technology progresses such that you can make any kind of image, people become visually used to that. That’s why there’s not much left today with a fresh impact. 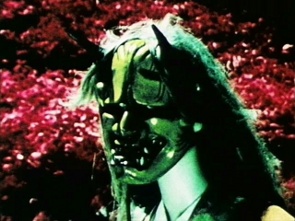 Oberhausen had 21 films in their programme – a programme with a strong consciousness for its film historic importance. Matsumoto seems to be close to himself when he doffs the schoolmasterly voice in his work. When mastership and fun get together in his images, then it all falls into clear pieces. His documentary, Nishijin (1961), made as a reaction to the disappointments of the first anti-AMPO movement, examines the plight of silk weavers of Nishijin. Connection (1981) thematises a shrine as a steady authority, flown over by clouds and circulated by people rapt in thoughts. Western critics reduced to the maximum Metastasis Shinchintaisha (1971), which shows a lavatory in western style, rainbow-coloured and vibrant, until it vanishes in a shimmering white. Ki-Breathing (1980) assembles slow-motions shots of a bursting nature, strong like a forced meditation. Atman (1975) explores the concept of one masked true self, sitting in a psychedelic field of rapid movement. Andy Warhol: Fukubukusei (1974) splits Warhol’s method to reproduce and to reproduce. Warhol surrounded by admirers; many people watching him; Warhol watched many times; all finally split again on a screen. It is an ironic look at an icon. Just like in Mona Lisa (1973), where Matsumoto once again focuses on a western cultural symbol. Her smile goes on and on, as we know, and this film leaves you with an uncertain feeling, which is what Matsumoto is saying to a western audience.

To be honest, he left me with a lifted eyebrow because I am still not sure if he is making fun of a western audience in playing around with symbols coming from the western – mostly European – culture? Technically, I was blown away by the pictures he produced, but I don’t want to be all that naïve and I still feel pulled by my leg by a slight undertone of sarcasm.