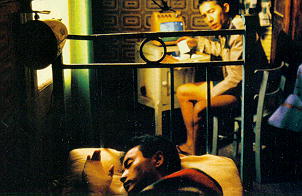 In writing on Happy Together we must first speak of two films: the 97-minute version, released theatrically in 1997, and a second one, roughly three hours long and never publicly screened. Footage from this second version has been shown in the documentary Buenos Aires Zero Degrees: The Making of Happy Together and a few frames of the deleted material have been posted on the internet along with sketchy descriptions of what was removed. The first version is by no means inauthentic since all of the footage was deleted by Wong Kar-Wai himself. But this has not prevented the missing footage from acquiring the near-mythical status of a lost object. Indeed, all of Wong’s films provoke this cult-like devotion for not simply what is up there on the screen but for what is also not there. Made in an atmosphere of chaotic improvisation at both the shooting and editing stage, these films have created their own category for one of the most fetishized areas of cinephilia: off-screen space. In Wong’s films, however, what is frequently masked is not simply reality or another space but another film. In this cinema in which nothing ever seems quite finished, a certain intoxicated cinephile discourse has come into being, often drawing attention to these magical fragments which are not there.

It is this perpetual sense that there is something else – possibly better – that is beyond what is immediately in front of us which dominates Happy Together. Throughout the film, the protagonists Lai Yiu-Fai (Tony Leung) and Ho Po-Wing (Leslie Cheung) express a constant concern to start over again, to experience a sense of renewal. If initially this seems to refer primarily to their own relationship, it begins to assume a larger function for Lai. His need to start over is also a desire to return to his cultural origins in the social space of Hong Kong and the personal space of his family. The journey to Iguazu Falls which he successfully completes near the end of the film is both physical and metaphoric, a beautiful but failed attempt at renewal in which the aerial shots of the falls function as a seductive vortex of falling water and movement. If the film has a center at all in the ordinary sense of the term then it is the theme of displacement. A Hong Kong film set largely in Buenos Aires, Happy Together is not quite a road movie (the one major attempt at travel which the protagonists make results in their car breaking down), not quite a film about exile (the exile seems too self-imposed), and in spite of the provocative casting of Cheung and Leung as lovers, not fully part of contemporary gay cinema in that not only is its director not gay but the film ignores homosexuality in explicit social or ideological terms. Even the decision to shoot the film in both black and white and color reinforces this sense of indeterminacy: the black and white images are never purely black and white but are always haunted by color, while the color itself is often partial or washed out.

Much of the literature on Wong has related the concerns of his work to post-war modernist cinema and Happy Together offers yet another example of the Deleuzian time-image: a world in which the characters drift, unable to successfully complete actions, a cinema unable to provide conventional narrative construction and instead shows a fragmented world caught up in a perpetual state of melancholia. In the case of Happy Together, though, this basic modernist concern also gives rise to an intensely physical cinema. It is there, first of all, in the bodies of the actors. Not the least of the film’s remarkable accomplishments is how it handles the personalities of two major stars of Chinese cinema, placing Cheung’s diva-like grandeur against Leung’s stolid inflexibility, a stolidity which often gives way to moments of unexpected emotional power. (Is there a finer actor in contemporary cinema than Leung?) This physicality has about it nothing of the choreographed and ritualistic movement found in the work of filmmakers like Tsui Hark or John Woo. The characters in Happy Together eat bad food, get drunk, dance, become sick, yell at one another and have sexual encounters marked by passion, violence and, later, anonymity. They move in this way because they are incapable of articulating their thoughts or feelings into words or useful action. Movement in Happy Together is almost constant. But this physicality and movement continually escapes culmination. Furthermore, the almost perpetually hand-held camera does not simply film or generate movement but becomes a kind of physical presence within the body of the film.

The entire film, in fact, offers itself up as a kind of physical object which speaks directly to us, working through the bodies of the actors and back out to the specific formal properties of cinema. The film opens with a literal act of sexual penetration, as Lai sodomizes Ho, and ends with a rapid tracking shot taken inside a train as it catapults Lai into a station as he begins his journey home. This physicality extends into the soundtrack as well, in which not only music but voice plays a crucial role. It is principally the third protagonist, Chang (played by Chen Chang and introduced forty minutes into the film), who is responsible for this foregrounding of the voice. Not only does he (like Lai) speak in voice-over but he also talks about the voice as a tactile object and mode of perception: “You can see everything by listening.” It is the Taiwanese Chang (firmly rooted in a strong familial environment) who introduces into the film the possibility of breaking with the pattern of melancholia in which the other two characters are caught. His perceptions, sharpened through an acute sense of hearing, are slower and more nuanced and he is closer to the world he moves within than the other two. Chang is the precondition for the beginning of Lai’s ability to understand and articulate, to achieve an emotional and physical proximity to the world. While at the end of the film Ho appears to be condemned to wander, Lai is en route to Hong Kong and a possible reunion with his father. The various jobs which Lai takes while in Buenos Aires gradually bring him closer to Hong Kong, from working as a doorman in a tango bar (where he is literally always on the outside looking in), to the kitchen of a Chinese restaurant, and finally to a slaughterhouse in which not only is he confronted with the brute physical reality of blood and death but, more crucially, the late-night hours become a way for him to put his body back on Hong Kong time. Perhaps even more central to the emotional core of the film’s resolution and its tone of cautious optimism is not Lai’s future reunion with his father but a possible one with Chang.

And so what about those “missing” images from Happy Together which may one day appear and be given a life? Will they offer us anything better than what we have already seen? Or will they be unwelcome guests in a film which we already know, one which has its own beauty and fascination and, for all of its fragmentation, does not really need anything else?