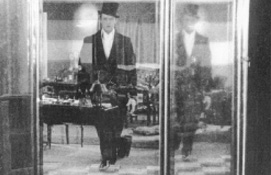 What the hell happened to Jean Epstein? Why isn’t he on our radar screens? Why hasn’t his work been much more feted, analysed, critically mauled and/or praised?

Save for 1928’s lauded expressionistic opus La Chute de la maison Usher (The Fall of the House of Usher), Epstein’s work has remained largely unexamined, particularly in English language criticism. The patient and detailed championing of his work by Jean-André Fieschi in Richard Roud’s Cinema: A Critical Dictionary (1980) (1), along with the exposure given his films by Kino Video in its 2005 two-disc release Avant-Garde: Experimental Cinema of the 1920s and ‘30s, are notable exceptions to this neglect.

Epstein (1897-1953) was a rare and sterling example of a theorist whose mouth, as we might say, could write a cheque that his ass could cash. His almost mystical enthusiasm for the possibilities of film was matched by his technical confidence and artistic skills. A pioneer and visionary, what he imagined, he made real.

The Warsaw-born Frenchman abandoned medical studies (as an intern, he ran into Auguste Lumière in the 1910s (2)) to move more deeply into literary work – as a poet, critic, publisher, editor, and, eventually, as a film theorist. His 1921 collection Bonjour Cinéma, which Fieschi refers to as “the record of a fever, a craving”, was composed with “whimsical typography” and evidenced “a kinship with Apollionaire” (3). Epstein’s extensive critical writing often refers to the camera’s gaze as a sensual, even erotic act – “molecular movement is as sensual as the hips of a woman… The atmosphere is heavy with love. I am looking.” (4) His enthusiasm for the medium’s potential soon swept him into the ranks of the first wave of avant-garde filmmakers, joining such names as Abel Gance, Louis Delluc and Marcel L’Herbier (5).

Beginning in 1922, with a documentary commemorating Pasteur’s centennial, Epstein’s solid work soon garnered him a 10-year contract with Pathé, churning out a respectable stream of mainstream movies. Still, his experimental instincts kept cropping up. In his 1923 feature Coeur fidèle (The Faithful Heart), a point-of-view sequence on a carousel disoriented audiences (6), prefiguring, or perhaps even inspiring, Hitchcock’s climactic scene in Strangers on a Train 28 years later. His sister Marie, best known for her own remarkable 1933 drama La Maternelle, was a frequent collaborator.

Although Resnais is most often cited as Epstein’s stylistic inheritor, Epstein’s aesthetic is an eerie precursor to both Renoir’s poetic realism and Truffaut’s jagged pseudo-documentary approach. His dependence on the close-up, his obsession with the totemic power of the object, his freewheeling mastery of cutting, variation of camera speed and trust in the interpretive abilities of the audience, all come to a head with La Glace à trois faces.

The fractured narrative follows the relations of three separate women – a high-flying society coquette, a vaguely Slavic, liberated artist, and a plain-Jane, domestically oriented girl – with a handsome, stylish, affluent young man. In the course of the film, he breaks an engagement with each of them in turn, tooling off in a sport scar to his eventual demise.

As each woman reacts to his absence, a flashback is sprung in her mind, economically giving us her perspective on this essentially superficial, insincere and exploitative man. Interspersed with these six story lines is his decision to speed away from his romantic entanglements. Presentiments flash through his mind. His car’s spiral downward through a parking garage seems a perfect metaphor for the giddy self-intoxication that rules his existence.

Abrupt shifts in tone, tighter cuts, low-angle shots and a final intercutting between the young man’s grinning visage and signposts of warning culminate in an unlikely collision with a flying bird, a tangle of burning wreckage, and our anti-hero’s putative transfiguration. His unknowable self – but was there a self at all? His powdered features are, in contrast to all the other characters’, almost cartoonishly slick and nearly androgynous – floats away, and the final shot dissolves from him even as he steps toward contemplation of himself in evening-dress in a three-sided, of course, dressing-room mirror.

After this, and the following year’s La Chute de la maison Usher, Epstein’s work became more hermetic, moving away from trained actors and controlled environments to quasi-documentary efforts centered on the sea-going folk of Brittany. His penultimate film, 1947’s Le Tempestaire, is also available on Kino’s compilation, and it shows an economy of approach that is a quietly beautiful distillation of Epstein’s methods and beliefs. Surely, we should be digging about in his 37-film oeuvre to see what else it can teach us.