Then there is the kind of cinema which turns all those expectations on their head. Which shows life as a jumble of thoughts, emotions and actions, where reaching any kind of goal is a miracle. Where the concept of reality becomes stretched, twisted and bent until one no longer has anything solid to hang onto. You drift with the characters in a world where everything is fluid, nothing is fixed, and nothing can be taken for granted. Where even physical rules are suspended.

Set in an outback desert and town, Boundless certainly lives up to its name. There are no boundaries between memory and present, reality and fantasy, truth and conjecture. Anything might be true, anything could have happened…or maybe nothing at all. Maybe it’s all just a dream?

The film opens with a series of spectacular wide-screen shots of outback sky and terrain which reminded me strongly of the ‘Dawn of Man’ opening in Stanley Kubrick’s 2001: A Space Odyssey (1968). The same vastness, the same stillness. The same growing sense of expectation up to the moment (in 2001) where we see the apes. But in Boundless, instead of apes, we see the couple’s sneakers step into what we assumed was a wide angle vista of a distant ridge.

Boundless has been compared to Nicholas Roeg’s Walkabout (1971) and to works by Alain Resnais. Mark La Rosa said in the Q & A after the screening of his film at Thornbury Picture House on 27 April, that he had seen Walkabout many times so it obviously was an inspiration for him. But he later told me that the inspiration was in the theme of people being lost in the desert, the stark beauty of that environment, and the modesty of Roeg’s production, not in the narrative style. Stylistically, there is more similarity to Roeg’s Don’t Look Now (1973) which, like Boundless, employs disorientating shifts in time and perspective. 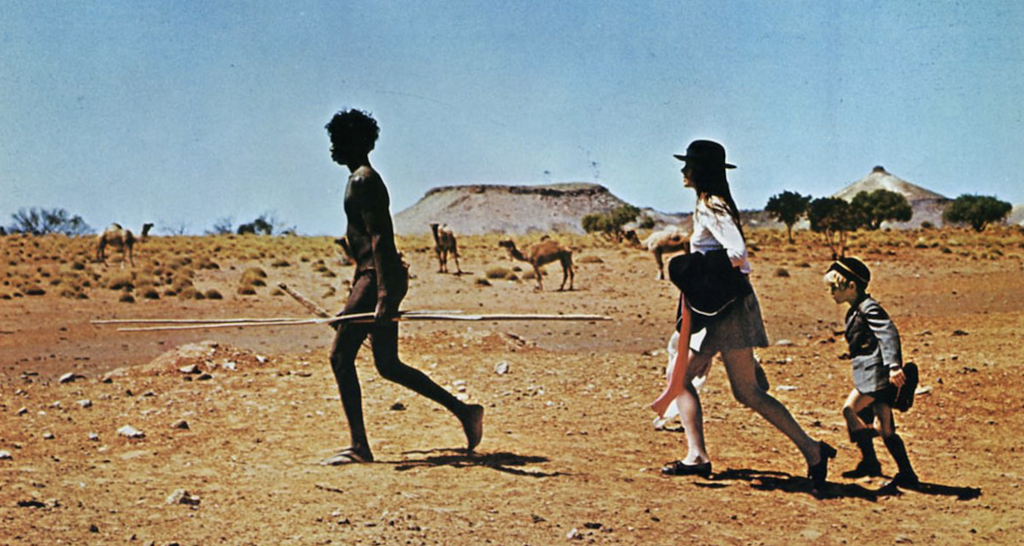 Boundless also has something in common with Alain Resnais’s Last Year at Marienbad (1961) in which a kind of jump cutting places the characters in different spaces, both inside the hotel and on the grounds, with none of the usual narrative logic or continuity. But La Rosa’s film is different from either of these films.

Marienbad was written by the French novelist and filmmaker Alain Robbe-Grillet and revolved around words – both voice-overs and dialogue, commanding in their repetitive and hypnotic brilliance. Without those words, Resnais’ film would have been a meaningless collection of visually impressive tableaux.

Roeg’s Don’t Look Now also relied to a certain extent on dialogue, whereas, La Rosa’s film has very few spoken words and those that are spoken are mundane to the point of irrelevance. So while Boundless may have similarities to the time shifts and the sense of characters being trapped in an endless loop as in Roeg’s and Resnais’ films, that’s where the similarities end.

In Boundless, the couple, played by Ciume Lochner and Jordan Fraser-Trumble, drive and hike through the outback terrain, apparently enjoying the sense of freedom afforded by this vast open space. The dialogue between them has more in common with 2001 where exchanges between the characters during the space travel scenes were largely banal and utilitarian. 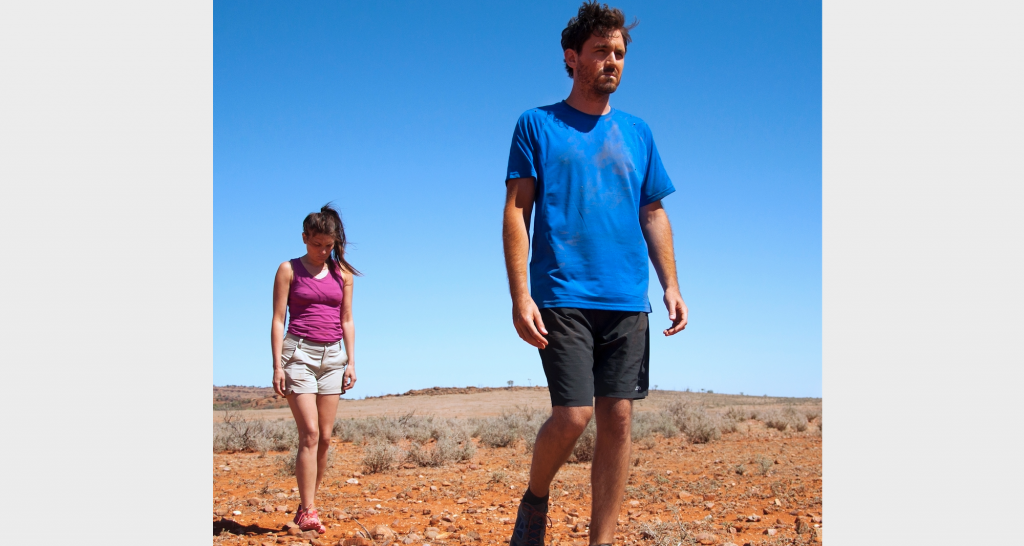 La Rosa appreciated my reference to 2001, telling me: “You are right about 2001 being a source of inspiration. I wanted to make a mysterious and lyrical film like that film.” In 2001, the dialogue was deliberately banal to show the deadening effect of technology on the human soul. In Boundless, I felt the dialogue was banal to show the shallowness of many present day relationships which is also accentuated by technology. When I asked La Rosa about this aspect, he denied trying to make any comment on technology or its effect on relationships. But he also said that many influences and intentions in a film are often unconscious. The similarities, influences, and intentions identified between films can also have more to do with the response of a cine-literate viewer than anything the filmmaker actually intended.

For example, we never see the couple in Boundless engaging in technology apart from taking photos and trying to get a signal on a mobile phone to send a distress call. But they are a modern young couple and I could easily imagine them sitting at the same table in a restaurant while checking their phones in isolation from each other just as most young couples do today. So it seems I’m juxtaposing my own thoughts and biases onto La Rosa’s film. But isn’t that what all audiences do whether intentionally or not?

Flashbacks show the couple dancing dreamily and making love in an outback hotel. Then, in the outback, they begin to see in the distance, another couple stumbling through the scrub, obviously exhausted, almost at the end of their tether. Who are they? Where did they come from? Do they need help? The questions crowd into our minds. But suddenly, the landscape is empty again. The couple watching are bewildered. Were the other couple real? Was it a trick of the light?

They try to return to their vehicle but it’s no longer where they believe they left it. They are suddenly and unexpectedly stranded without water or cover in an alien, inhospitable environment where any direction seems interchangeable with any other.

After futilely searching for their vehicle, they begin to hike in the direction they believe civilisation lies. It’s a long trek, an endless trek where they constantly look across the landscape to see themselves walking along yet another dusty track further away. Now it seems apparent that the couple they saw stumbling through the scrub earlier was themselves in some strange shift of timelines.

For me, this was the third allusion to 2001, reminding me, improbably, of the brightly lit rococo drawing room in which the astronaut Bowman finds himself after the Stargate Sequence. In his spacesuit, he walks to the bathroom door and sees himself already in there as an older man in a dressing gown. The older version of himself hears something from the room beyond and comes to the bathroom door (no sign any more of the space-suited Bowman) and looks out to see himself sitting at a table eating dinner as an even older man. He then turns from the table to see himself again, now an ancient man lying on the bed awaiting death and rebirth.

This technique of disorientation, achieved through editing, shows the couple’s minds beginning to unravel. Past and present become interchangeable. Memories intersect with fantasies and reality becomes ever more tenuous. Flashbacks are repeated. We see them again dancing dreamily in the hotel, running along the street of an outback town, seeing themselves lost in the outback for the first time. Yet this repetition never feels boring.

And La Rosa again shows us how the outback can deceive the eye. His camera (and it was his camera since he was also the cinematographer) focuses on a tree. For a long moment, we observe the dense texture of the foliage. Again, a sense of expectation. Then, slowly, he moves around the tree to reveal the couple’s vehicle, its doors still open as they left it. The camera tracks around the vehicle, lingering on various items before slowly pulling back and stopping again behind the tree which once again hides it so perfectly from view.

I got the feeling that the vehicle had never moved. The couple were simply disorientated by the environment and, unable to see through the dense foliage of the tree’s leaves, believed their vehicle had been stolen and driven off. And so their entire predicament hinged on the outback’s other-worldly ability to deceive their senses.

For me, Boundless doesn’t end for there are no answers and no resolution. We leave the couple still out there wandering in the wilderness. Or are they?

La Rosa heightens the dreamlike feeling by never allowing the couple to appear ‘realistically’ effected by their environment. Yes, they stumble along the various tracks getting weaker and weaker but there is little indication that the sun is really burning their skin or that thirst is really killing them. In fact, they continue to look and act remarkably healthy – although exhausted – throughout their ordeal.

If we were to look at any number of films in which characters are lost or forced to walk through the desert for long periods without water or shade, we see sun-blackened skin, horribly cracked lips, eyes almost glued shut from the sun’s glare, an increasing state of collapse to the point where they are incapable of moving any more. And at night, the fact that temperatures in the desert can plunge to below zero gives an eerie feeling of dream to those scenes where the couple sleep under rock ledges in t-shirts and shorts with no apparent discomfort.

In 2001, the apes also slept under rock ledges in the desert but they had thick fur where the couple in Boundless most certainly didn’t. I got the feeling they had somehow transcended their environment. That we, the audience, had been cast adrift from what we regard as reality and fallen into a dream zone.

During the Q & A, an audience member asked did the characters live or die. La Rosa said they both lived and died. I think they transcended the realms of life and death and found themselves in a kind of parallel universe where they would continue wandering those outback tracks for all time. A kind of white man’s ‘dreamtime’.

Boundless is not going to be everyone’s idea of ‘a good movie’. Those who want or expect to see protagonists overcoming challenges to achieve a definite goal might be frustrated and disappointed. Those who want to see a ‘realistic’ portrayal of people lost and trying to survive in the desert may also be disappointed. But Boundless is the kind of cinema I’d like to see more of.

The kind that throws realism out the window (even while appearing to be ‘real’), straddles a border between experimental and narrative, and is not afraid to challenge audience preconceptions of what cinema can or should be. Full marks to Mark La Rosa for this one.