Peter Tammer’s Fear of the Dark (1985) is partly a fictional exploration and re-enactment of the process of murder and violent intent. It is also part Cinéma vérité documentary of actor Robert Ratti’s daily life. We witness Ratti’s vicissitudes of searching and touting for work and his concerns about the scripted performances that bookend the film. These performances are the brutal shooting of a victim in his home and ends with the re-enacted murder of an abducted child. In light of the current media and cultural attention on male perpetrated family and sexual violence, Fear of the Dark is a film worth re-examining as it plumbs deep into the male’s psyche.

Tammer’s film is readable as a productive entry-point for a challenging review of contemporary male identity. The film’s dialogic approach lays bare a method of constructive introspection, inspired by the testimonial monologues of Bill Neave. This dialogic term embraces the interplay between fiction and documentary, Tammer’s conversational style and importantly the collaborative dynamic between actor and director in the final scene.

Although Tammer made the film in 1985 during a critical period of emerging feminist independent filmmaking globally and in Australia, his approach has remained invisible for more than 30 years. Nevertheless, Bill Mousoulis has marked it as “one of the best Australian films ever.”1

Fear of the Dark emerged after Tammer’s award-winning Journey to the End of Night (1982), which testimonied war veteran Bill Neave’s sublimated WWII pain, related from his Casterton home lounge chair, belatedly, 40 years on. The focus on Neave’s relentless monologic recounting reproduced the immediacy of his traumatic experiences as if they were occurring right now. Fear of the Dark is read here as a response or an extension to the testimonial technique Tammer established in that film. Ratti’s victim performance of the abducted child reproduces Bill Neave’s traumatic recounting and evolves it into a productive visceral acting technique. Fear of the Dark asks: what traumatic encounters with violence, killing, and murder are the next generation required to navigate?

Fear of the Dark opens with a creaking door and intense breathing. Ratti’s head slowly peeks in from stage right. He enters the room and traverses a suburban hallway. The close-up of the face and a snivelled revulsive breathing both in classic horror style fill the screen. He unwraps the rifle he is carrying. We hear a clock, a shower. Ratti shoots a man in the bed, invoking a chilling male scream that is silenced by further gunfire. “What have you done?” comes a woman’s voice as she exits the bathroom. Another gun-shot. A further creaky shutting of the door concludes the opening sequence.

The title, subtitle, and credits follow. They are all here rather than at film’s end. The red title reads like a tabloid headline hovering over newspaper clippings of ‘Life for taxi killing youth’, ‘3 soldiers die in missile fire’, and an apt ‘Gunman may be living a fantasy say police.’ The subtitle, A Portrait of the Actor Robert Ratti, and the credits continue while Ratti talks. He ruminates about visiting his parents, his body’s numbness, and concern about his metabolism. He talks directly to the camera about his fear, to hold onto something for hours with re-shooting and lighting changes requiring repetitions of past performances.

A series of such dialogic shifts between cinéma vérité performance and reflection occupy the film’s middle section. There is a scene in Ratti’s St. Kilda flat, talking to the real-estate agent on the telephone about his overdue rent, cigarette, and pre-digital phone book in hand. He chuckles at and with the witnessing camera. A tense, ambiguous scene has Ratti with a woman (Amanda Testro) talking in front of a window in a suburban lounge. The conversation kicks up a lot of unanswered questions. What does she want him to do? Is she dying? Is he holding something back? He gives her some tablets. It is a suicide pact. Kneeling in front of her, he starts to sob, which morphs into laughter that bleeds into the next scene set in a makeshift recording studio, rehearsing and laying down laughter tracks. Is the laughter funny, manic or contrived?

At the laundromat, we hear in voice-over a checklist internal dialogue from the actor about being a slob, letting himself go, then talking directly to the camera about a script problem while seated. We are back in Ratti’s St. Kilda flat. He is registering for emergency teaching work on the phone. The bartering predicts the kind of telephone manoeuvring automated by corporate help-lines today. Ratti’s focus switches from a phone conversation about an offer to act in a cricket commercial to a camera aside. This disclosure of his ambivalence about advertising is communicated instantly and more effectively than any essay on surveillance capitalism.

In a black and white sequence, Ratti recalls a recurring dream about a murder in a suburban house, reminiscent of the opening scene and the fantasies invoked by the tabloid headlines. We hear the camera whirring rather than the first scene’s breathing. Who is stalking who? Is this a personal or scripted disclosure by Ratti? These ambiguities build a dissociative effect. Singing in a shopping mall to applause extends Ratti’s equivocal commercial associations and further stacks up the manifold public and personal situations being serially rolled out by Tammer in dialogue with his collaborator. We glimpse who Ratti is and toils to be. We move in and out of the film’s vulnerable traumatic space, its making, and its meaning through these witnessed events. For Mousoulis “its minimal distanced relation to its story creates an open field of connections, meanings and effects.”2

When Ratti speaks directly to the camera, Tammer’s reflexive approach is more visceral than related techniques in Jean-Luc Godard’s films such as Two or Three Things I Know About Her (1967), for example. Tammer’s intimacy is less about style and fashion and the male gaze and more about internalised violence and distress. Tammer’s approach relates to an Australian direct cinematic brutality available in Wolf Creek (Greg McLean, 2005), Samson and Delilah (Warwick Thornton, 2009), and Wake in Fright (Ted Kotcheff, 1971). In Tammer this malice, like the imagined cruelty in his Journey to the End of Night, emerges out of a Melbourne-based practice.

This series of ambiguous and shifting performances sets up the film’s final Janus-faced stanza, braiding the interrogation of a young murder witness with the perpetrator’s own recollection. Ratti discloses to the camera being scared of not being able to take on his next character. He has never been asked before to summon up so much “all at once”. It is about activating overwhelming experience and managing its primeval trace when home alone afterward. Trauma operates and festers its wounds in this way. 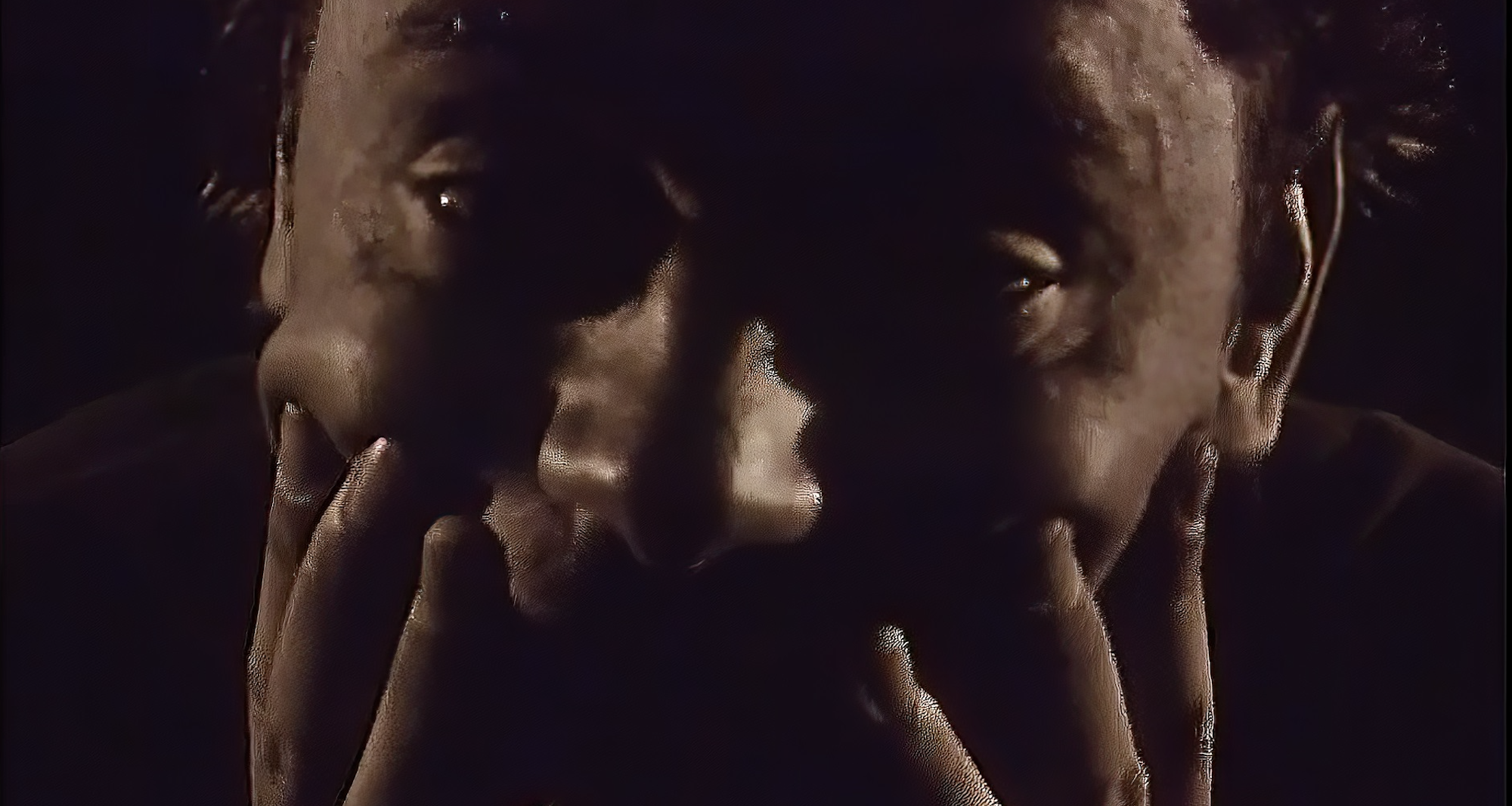 Fear of the Dark

Image texts from Melbourne tabloids and Tammer’s archive populate the beginning of the final dialogues: Life for taxi killing youth. Max the cop shooter, Dockside justice: ‘We kill our own,’ Scary Mary sets a poser, Man guilty of killing son, The Blades of Bigotry, Policeman paraplegic – doctors, My sole reason to exist was for killing, Portrait of a ‘creature,’ Boy sees friend killed. This collage brings to mind the horror trope of the psychopath killer’s lair in films like Seven (David Fincher, 1995). Such clandestine retreats contain a field of linked maps, clippings, images and texts revealing the perpetrator’s murderous intent.

Two performances entwine. One is recorded in sepia and the other in colour. In the coloured version, the camera looks down on a crumpled-up Ratti. Ratti is enacting the dialogue of a 13-year-old boy asked by police to describe the terror of murder and abuse he has witnessed of himself and his dead friend by two abductors. Ratti delivers a bundle of broken words and hesitancies reminiscent of Bill Neave’s gut remembering. Ratti adds boyhood displays of choking, crying, and looking down to his ‘recall.’ Tammer asks the interrogator’s questions off-screen, which becomes apparent when Ratti asks, “Is it enough, Peter?” This question shifts the dialogue from witness/interrogator to actor/director, but uncannily, the emotional delivery does not alter. Ratti finishes with “Now Peter, I go back to feeling nothing.”

The second performance is the sepia scene shot of an overbearing Ratti, looking down to the low camera to deliver a perpetrator’s abusive postures and mutterings to his accomplice, played off-screen again by Tammer. “He put up such a good fight, like a fish trying to swim away through my fingers.” “I could not stop coming. He was so warm.” These two performances mesh in the heat of the scene’s dialogic delirium. It is easy to lose track of who is talking. The audience is overwhelmed. The film finishes with a readable clip from an Age newspaper article: “Paper boy sees friend killed” from 6 May 1982.

These two dialogues were shot in one day, and one take – one in the afternoon, one in the evening. In each case the camera ran 400 feet of 16mm film (approximately 10 minutes and one magazine) non-stop for each take. Tammer and Ratti had rehearsed the dialogues on video in advance. The boy’s witnessing, the heart of the storm, was the final evening take. From 1979 to 1981, Tammer organised home acting workshops to develop intimate exchanges. In one case the actors used a telephone and had to respond spontaneously to a cue within 30 seconds of receiving that cue. Tammer also assembled an archive of newspaper clippings on political and cultural issues over many years beforehand. Both these projects honed the skills and provided the resources to realise this innovative production.

Like the closing acts of David Lynch’s Mulholland Drive (2001), Fear of the Dark delivers a visceral charge that hits you before your thinking begins. In its conclusion Tammer and Ratti’s collaboration attained an intense and confronting inner dialogic discourse probing male violence and abuse. Deep and challenging contemporary media concerns around male identity are productively addressed. In its aftermath the self-examination process extracts and moves the viewer beyond violent and abusive behaviour through to a body-centred knowledge. In my view Tammer and Ratti’s dialogic method efficiently lays bare a deep inner dialogue on abuse and how such traumatic learning, as documented in Jay Roseblatt’s short found footage film, The Smell of Burning Ants (1994), rears its ugly head. By naming it, we can control and confine its impact. By pushing his collaborative practice to its limits, Tammer established this insight more than 30 years ago.