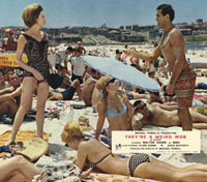 This article was originally published in Cteq: Annotations on Film when it was a supplement of Metro 111, 1997. It has been slightly revised.

They’re a Weird Mob needs a new set of significations rather than an introduction. Although I want to wrestle the film away from the retrospective embrace of Cinema Studies’ Powellites (who often have little interest either in British or Australian cinema), I almost agree with David Thomson that Powell is the “most consistent” of British directors (1). So I suspect I actually perceive more of Powell’s film poetics and politics in They’re a Weird Mob than his keenest supporters, embarrassed by a film they consider only as part of the post-Peeping Tom (1960) career rubble (2). But that can wait. The following recontextualisation is more urgent.

Industrial History: as an Australian film

What is so curious to our ears, when reading Powell’s long account of his Australian period, is the absence of commentary about an absence (3). This was after all “the interval”, when Brand-X film journalists insist that no Australian film industry existed. Powell is utterly at odds with authorative depictions (by Pike, Bertrand and Shirley) of an industry exemplifying Elsaesser’s description of most non-Hollywood film industries as split between “cottage” (almost pre-capital) production and “monopoly” (almost post-capital) exhibition and distribution (4). Instead, Powell depicts – in his shuttles between the power centres of film capital in Melbourne and Sydney – a thoroughly active subculture of Australian capitalism. This is not because either version is wrong. Rather, Powell instinctively used his contacts (such as John McCallum), his skills as an independent cinema confectioner, and his gentlemanly Englishness to provide a bridge between Australia’s alienated film production and capital cultures. He never noticed anything was wrong. It was this that peculiarly made They’re a Weird Mob the first genuinely Australian feature film of the modern era.

Powell’s mission was quite different to that of the Hollywood studio executives trying to repatriate capital locked up by Australian law (and making Summer of the 17th Doll, On the Beach, both 1959, etc. to do so). Once ingratiated into the culture of the Australian industry, he instinctively understood that the problem of Australian production was in what we’d now call “value adding”: not that you couldn’t make features but that the opportunities to do so were ludicrously unexploited – and waiting for an old smoothy like Powell. By the time the deal for They’re a Weird Mob had been made, most of the membership of the then “Big Bad Combines” were signed on: Greater Union, Rank, Williamsons, British Tobacco. Even without having to look up to the screen to see the film’s Rank-equivalent depth of indigenous acting talent, we are reminded of how infrastructurally capable the Australian film industry was of receiving a cinema beachcomber like Powell, if its hard film capital could be charmed.

Kitschy preoccupations with Sydney’s popular visual signifiers are evidence of They’re a Weird Mob‘s international ambitions. But it was its local market success, as well as its utter predictability, that are significant to Australian film history (5). Notoriously (yet unarguably) the exhibition chains had done little to promote independent feature film production between 1911 and the 1970s. Stories of thrown-away suburban releases seem mythic but are essentially true; counter accounts of success occur only in the “programmer” or exploitation market in the drive-ins or at the bottom of the bill (Lee Robinson and Chips Rafferty’s 1950s features, for example), or because film capital had a direct stake, often due the waving of various government cultural policy carrots (as with the Cinesound cycle). When the “Trades” piously discuss They’re a Weird Mob by repeating the dominant myth of Australian film capital – that this film succeeded because Australian film production had never before provided a crowd pleaser (6) – they ignore what was really unique: the willingness of film capital to give its own film the reasonable marketing labour and cunning all Australian features should have deserved and any Anglo-American product would have got.

This is an Australian film, about Australians with Australian financial backing. They’re a Weird Mob is destined to be one of the great successes in 1966 in Australia…. It could herald the rebirth of the Australian film industry. Certainly everybody in the Motion Picture in Australia is vitally interested in the success of the film. (7)

The film’s runaway local success promoted a false dawn of Australian independent production. Eleven features were produced in Australia over the next two years – more than during any equivalent period since the end of the silent era (8). Maybe the almost wilful silliness of most of these ugly international film capital mongrels suggests (conspiratorially) a hosing down exercise by film capital compromised by success. Still, They’re a Weird Mob had done its historical work. It contributed both a genre and a finance/production model to the subsequent real dawn a few years later: for example, the Hexagon production/capital alliance between Greater Union and director Tim Burstall (Alvin Purple, 1973, and Petersen, 1974).

Powell’s reputation in life was undoubtedly essential is breaking Australian film capital’s long, undeclared, simultaneous strike against and lockout of Australian production. Yet, as intensely as Powell, post-mortem, charms Cinema Studies, the politique des auteurs should not be allowed to obscure the origins of any feature in the rough vernacular of a national film industry. That would be like claiming that Luis Buñuel’s Mexican films are Spanish, or that The Piano (Jane Campion, 1993) is Australian… hmmmm.