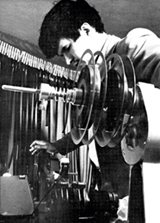 As an amateur enthusiast working out of the Auckland Filmmakers’ Cooperative in the early 1980s I stumbled across a pile of Canyon Cinemanews, the publication of the famous San Francisco film distribution cooperative. This publication was a revelation. Flicking through page after page I discovered, for the first time, the existence of a film artists’ movement in the United States: I had been wondering for some time why films did not reflect or echo the concerns of contemporary visual arts. One name, in particular, stood out in its pages: Stan Brakhage, the dominant figure of the American avant-garde cinema. But what would his films look like? That question was answered for me in 1983 when I saw my first Brakhage films. These films were included in an American Federation of the Arts’ History of the American Avant-Garde cinema program which screened in New Zealand that year.

Brakhage’s films included: Window Water Baby Moving (1959) showing his first wife, Jane, giving birth to their first daughter; his magnum-opus Dog Star Man (1961-64); the startling The Act of Seeing with One’s Own Eyes (1971), filmed in the Pittsburgh Coroner’s Office; and The Text of Light (1974). In addition to his filmmaking Brakhage also wrote and published several books on cinema including Metaphors of Vision, A Moving Picture Giving and Taking Book, The Brakhage Lectures, Film Biographies and The Brakhage Scrapbook.

Brakhage’s oeuvre poses this question of cinema: how would the aesthetic principles that guided, say, the music of Béla Bartók, Edgar Varèse or Charles Ives, the painting of, say, Jackson Pollock or Arshille Gorky, or the writing of, say, Ralph Waldo Emerson, Walt Whitman, Gertrude Stein and James Joyce appear if they were applied to film? The cinematic language that Brakhage crafted from these, and other, influences has today projected itself forward into the form and style of music videos, television commercials and feature filmmaking.

So, you may ask, if Brakhage’s influence has already been absorbed into dominant cinema why should we bother looking at his work? Well, there are a couple of answers to that question. The first is that Brakhage’s innovations, turned to commercial ends have often been trivialised and denigrated by their new masters. Of course, Brakhage has helped to make the language of industrial cinema more interesting but, at the same time, the expressive gesturality and subjectivity that underlies Brakhage’s aesthetic ethos are today most often rendered by others as redundant mannerisms. Secondly, it is a matter of getting to the very root of things. To fully understand, say, rock-and-roll music and to create and innovate within that form it is helpful to have a grounding in black gospel, blues, soul, as well as country and western music because they are the actual roots of rock-and-roll. The same rule applies to all art which seeks to be genuine. If one is unable to get to the source of something, be it cultural, scientific or philosophical then it is unlikely that one will be able to innovate within that form.

In the almost 400 films that he made between 1952 and 2003 Brakhage attempted to create cinematic metaphors for consciousness and perception. Inspired by Ezra Pound’s edict for artists to “make it new”, Brakhage fashioned new forms of cinema. Dispensing with narrative, Brakhage sought instead to create novel ways of thinking appropriate to the language of cinema. He sought to create a cinematic style through which humans might share their deepest thought processes. The result is a challenging body of intense emotional work ranging from documentary to mythology; home movies, structural films, collage films, right through to abstract visual “musicals”. Brakhage attempted to expand cinematic experience from mere description, often through visual metaphor, to incorporate the subjective dimension of dreams, imaginings, visions and intuitions. His aesthetic envisioned the dialectic between subjectivity and objectivity in an unusual combination of documentary and romantic impulses. As humanist documentaries, Brakhage’s films are a record of his visionary experiences. The flow of images in a Brakhage film represents the flow of images in consciousness. Brakhage’s films are representations of moving, visual thinking.

The romanticist aspect of Brakhage’s cinema is manifested in his desire to undo the levelling effects of socialisation; to recover the profound personal vision of one’s childhood. The romantically driven artist attempts to recover that which society would undo. To be true to oneself, one must be true to one’s personal vision. Vision, for Brakhage, is a product of the whole body. Our experience of seeing is a complete physiological act, the result of a nervous reaction to light impulses entering our eyes and then passing down the optic nerve to create mental representations which, in turn, trigger a range of associations, memories and related reactions.

Brakhage believed that both a movie camera and film stock could be manipulated to faithfully render these inner visions. His concept of sight included the flashing patterns the eye registers when rubbed, association, memory, fantasy and dreams. He employed many techniques to realise this concept of vision – rapid, hand-held camera movement, the use of specially prepared lenses, and by directly working on the film’s surface – painting, scratching, cooking and growing moulds on film. Brakhage employed filters, distorting lenses and camera movement to create a two-dimensional cinematic space. This space often came to mark the convergence of romanticism and abstract expressionism in his cinema. As action painters pitch themselves into tumultuous situations to make works which emphasise the moment of creation, so Brakhage emphasised the ecstatic experience of self as a means of integrating one’s personal identity into the medium. In so doing, Brakhage hoped to incarnate vision – to realise vision as an act of the total body. This visionary aspect became so overriding for Brakhage that for most of his career he made silent films.

Assessment of the progression of Brakhage’s style reveals his difficulty in reconciling a naturalistic, subjective cinema with formalist abstraction. In such earlier films as Thigh Line Lyre Triangular (1961), Dog Star Man, Mothlight (1963), Song 21 (1965) through to The Wold Shadow (1972), Brakhage attempted a synthesis of subjective and objective viewpoints by alternating between gestural and documentary-style representations. It is as if Brakhage, true to his American romanticist roots, had trouble relinquishing the photographic image. All of the above films leave an almost indelible trace of Brakhage’s struggle toward the complete interiority of such later films as The Dante Quartet (1987) and Rage Net (1988); abstract films created by painting and drawing directly onto the film surface with acrylic paints, India inks, dyes and magic markers.

Brakhage’s first films conformed to the then dominant practice of American avant-garde cinema – the psychodramatic or trance film. Such films usually depict an isolated protagonist in a psychically charged land or cityscape populated by objects of symbolic significance. The protagonist appears troubled and frustrated in a love quest or seeks meaningful interaction with the world. Nevertheless, even in these early films, Brakhage’s camera movement functions as an extreme articulation of his emotional response to the event being depicted. As his aesthetic developed Brakhage began to dispense with actors and dramatic situations. His quest for a truly subjective cinema demanded that the protagonist be not in front of but behind the camera.

Two black and white films from 1957, Daybreak and Whiteye, demonstrate Brakhage’s early attempt to push the psychodrama towards lyricism. In both of these films Brakhage strove to stay as true as possible to the moment of photography, completing them with very little editing, afterthought, or restructuring.

Daybreak is an atmospheric, moody film in which we see a young woman wake up and prepare to go out into the world to commit suicide. When reaching the place of her intended death, however, she observes and is observed by a young man. This causes her to realise that there may yet be a chance of love for her. The use of actors in Daybreak, as well as the almost melodramatic ending, suggest an affinity with narrative cinema, an affinity which Brakhage resists with his individualistic, hand-held camera, disjunctive editing and strident, non-synchronous soundtrack, all intented to evoke the young woman’s anguished mental state. Brakhage takes us right into this woman’s head and heart. His portrait is in no way objective. Her heightened emotions create a hyper-cinematic reality. Just as the woman’s emotions are concentrated, so is the viewer’s attention. We become fully aware of our place in the world, our perceptions more fully attuned. Brakhage does not allow our experience to be that of the distant voyeur. Just as the writing or reading of a poem requires one to become fully involved, aware and absolutely concentrated on the moment, so to does Brakhage’s cinema demand our complete concentration and involvement.

After seeing Marie Menken’s simple, personal films in New York during the 1950s, Brakhage began to direct his work away from psychodrama toward a poetic vision of cinema. Thus, a winter landscape in Whiteye becomes a vehicle for a lyrical rendering of frustrated love. The opening shot of the film is a pan along a window frame. Rather than the surrogate protagonist we identify with in Daybreak, we are given here to understand that, in looking through the window, we are seeing through the filmmaker’s eyes. This subjective viewpoint is reinforced as the camera continues its exploration to reveal a lit candle on the windowsill. The vertical candle with the flame above could represent the letter “i”, the I of the self, the I that sees through the eye. It is like a little cinematic sentence about knowledge that comes from seeing (i=eye=I). That the candle stands as it does before a window intersected by the window frame further represents the filmmaker’s divided state of mind as he attempts to write a love letter.