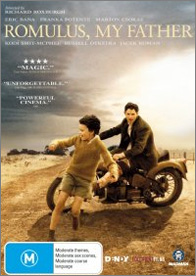 Filmmaking is an art born of compromise. Compromise is inherent in the collaborative nature of feature filmmaking, in the contingencies of shooting on location and in the limitations of working within a budget. This is particularly the case in the Australian film industry, where the rigours of government-funding applications and the meagre finance that results invariably place restrictions on the filmmaker’s original vision set down in the screenplay’s first draft. Dealing with compromise is no doubt frustrating for a filmmaker, but it is often out of compromise that creative solutions are arrived at. In this sense, compromise can be viewed productively, rather than negatively. Rather than hampering the artist at work and inhibiting their creativity, compromise can push an artist to produce their best work.

This theme of compromise runs throughout the extras included on the DVD release of Romulus, My Father (2007), the first feature directed by actor Richard Roxburgh (1). In his video diary recorded on location, in publicity interviews and in his audio commentary, Roxburgh constantly uses the word compromise – and always in the negative sense. He mourns the loss of shots that were never achieved during principal photography, because 60 scenes were cut from the script during pre-production, because they couldn’t afford to pay cast and crew overtime, because of occupational health and safety issues, because the vintage motorbike of Romulus (Eric Bana) kept breaking down … In an interview for ABC television’s At The Movies, Roxburgh tells Margaret Pomeranz that, as a director, you are wedded to compromise, and it is clear that this frustrates him. With a wry smile and a resigned tone, he says, “It is a hard marriage.”

While Romulus, My Father is his first film, Roxburgh is a well-respected theatre director, having staged an adaptation of Tim Winton’s That Eye, The Sky, amongst other productions. His relative inexperience as a film director is compensated for by the creative team supporting him: Arenafilm producers Robert Connolly and John Maynard (The Bank, 2001; Three Dollars, 2005), veteran cinematographer Geoffrey Simpson (Shine, 1996; Oscar and Lucinda, 1997), editor Suresh Ayyar (Bad Boy Bubby, 1993; The Interview, 1998), and lead actor Eric Bana (Chopper, 2000; Munich, 2005). (2) Maynard, in particular, has nurtured a number of first-time features as producer of Vincent Ward’s Vigil (1984), Jane Campion’s Sweetie (1989), Rowan Woods’ The Boys (1998) and Connolly’s The Bank. The film’s screenwriter, Nick Drake, from London, is also a first-timer; like Roxburgh, he comes from a background in theatre. Similarly, key cast members – Russell Dykstra (Mitru) and Jacek Koman (Vacek) – have previously worked with Roxburgh in theatre.

In his video diary and the interviews on this DVD, Roxburgh comes across as self-deprecating, almost to the point of embarrassment, as if the film was made in spite of his involvement. Considering the time constraints of the shoot (35 days with a budget of $6 million), the depth of character evoked by his actors’ performances suggests otherwise. (3) By the time he comes to record his audio commentary, however, Roxburgh speaks with the calm authority of a filmmaker who, for better or worse, owns his film. While he still relates anecdotes of how individual scenes were compromised during shooting (such as the sex scene between Bana and Franka Potente, which they only had eight minutes to shoot), it is a relief to hear him finally claiming ownership of the vision on screen.

The film is adapted from philosopher Raimond Gaita’s memoir, a critically acclaimed and much-beloved book, first published in 1998. Gaita’s book is a loving testimony to the struggles faced by his immigrant parents, relocated from war-torn Europe to rural Victoria in the 1950s, and it celebrates the compassionate moral philosophy of his father. When I first saw this film, I was struck by how reticent, almost inarticulate, the characters seemed, especially Romulus. The impression I had from Gaita’s book was of a highly intelligent, literate man, fond of long conversations with his close friend Hora, prone to deep moral contemplation and committed to high ethical ideals. What intrigued me about Roxburgh’s adaptation was how little Romulus spoke. As we learn from the DVD extras, the silence that surrounds these characters was very much a deliberate choice. Roxburgh wanted the characters’ relationships to be communicated through gesture, rather than words – for example, the scene of the breakfast ritual between father and son, where not a word is spoken but their gestures and facial expressions convey their thoughts and emotions. He was also concerned that the book’s philosophical contemplations might come across as didactic (hence the film has only a few brief scenes where Hora introduces Raymond to Bertrand Russell, and where Romulus tells Raymond that works makes a man).

Those who, like me, have missed in the film the warm tone of Gaita’s reflections on his childhood will relish the interview with him included here, where he talks at length about his reaction to the film and the people in his life who have now been embodied by actors. This intimate interview feels like a private discussion between Gaita and ourselves (the questions being cut from the interview and the interviewer not identified). In this forum, Gaita is able to reflect upon the film’s portrayal of Romulus, Christina, Vacek and Mitru, in particular upon the various forms of madness represented by each of these tragic figures. He suggests that the film portrays Vacek – a homeless man living among boulders and boiling eggs in his own urine – as simply eccentric, when in reality his insanity was quite profoundly apparent. According to Gaita, this made his father’s unconditional acceptance of Vacek all the more remarkable. Gaita also stresses that his father never fully recovered from his own mental breakdown; in the screenplay, there was a scene at the end of the film where Romulus was to release the bees from his hands with “a confident gesture”. Gaita counselled Bana that this gesture should “not be too confident – I don’t want people going away thinking everything is fine.” His father’s illness, says Gaita, “left its mark” and Bana’s performance in this final scene leaves us with a fragile sense of hope. It is a tentative, rather than triumphant, note on which to end the film.

With a total running time of 136 minutes (which exceeds the feature’s own running time of 110 minutes), the DVD extras are bundled together on a separate disc. Also included are the theatrical trailer; a panel discussion between Bana, Roxburgh, Connolly, Gaita, Drake and Marton Csokas (who plays Hora) recorded at the Sydney Writers’ Festival; another panel discussion – this one recorded at Popcorn Taxi – between Roxburgh, Connolly and Simpson; and a study guide produced by the Australian Teachers of Media (basically, a PDF file you download from the disc using your DVD-Rom drive). Written by Marguerite O’Hara, this guide compares the film with Gaita’s book, which is a set text for final-year secondary-school students in Victoria. Addressing issues of adaptation, migration, memory and mental illness, the 16-page study guide includes classroom activities and is nicely illustrated with colour stills from the film.

One quibble: the video diary is taken from the film’s website, where Roxburgh’s end-of-day reflections were posted during shooting. The video diary’s presentation on the DVD is disappointing. Each day is topped and tailed by the film’s theme music, complete with opening and closing credits, which is tedious if you choose to watch all days in sequence, rather than separately as they were originally intended on the website. In particular, the sound mixing is poor: the variation between the theme music and Roxburgh’s voice recorded on set means you are constantly dialling the volume up and down. But this is a minor flaw in what is otherwise an insightful and rewarding package of extras. These extras enrich the experience of Romulus, My Father as a work that now encompasses both literature and cinema. Together, the extras encourage further contemplation of the work’s core themes of compassion, moral strength, and mental health, and they deepen our appreciation for Roxburgh’s achievement in bringing his vision of Gaita’s memoir to the screen.