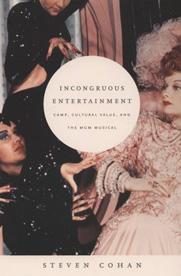 Incongruous Entertainment: Camp, Cultural Value, and the MGM Musical is a beautifully crafted book which seamlessly blends wit, entertainment and academic rigour to produce a work that is as rewarding and stimulating as the MGM musicals analysed. Steven Cohan re-examines the MGM musicals produced in the 1940s and 1950s – films that epitomised the classical Hollywood musical – by focusing on the camp disruptions to the codes of heteronormativity central to their production. Cohan’s arguments are shaped by an intricately layered consideration of the filmic and extrafilmic elements of these musicals that combine to produce a camp style discernible across a range of production and consumption sites. This style is particularly evident at a textual level where camp intersects with representations of ethnicity and race in the construction of MGM’s stars. It is further evident at the extratextual levels of production practices and personnel, marketing, and the fans of these musicals, both past and present. This extensive exploration provides a dynamic basis for Cohan’s innovative assertion that the camp sensibility of these MGM musicals was pivotal to their mainstream success and knowing appeal to the camp spectator at the time of their release, as much as it accounts for their continued appeal to a contemporary queer, yet diverse, niche fan base.

The rich scope, innovation and importance of Incongruous Entertainment’s approach is founded on Cohan’s engagement with a wide range of academic work on the Hollywood musical, which he extends by blending this work with models that map the continuing cultural expansion and contested definitions of camp. The academic basis for Incongruous Entertainment is film musical scholarship spanning nearly four decades. Cohan engages with the principals of film musical scholarship, notably Jane Feuer, Rick Altman and Richard Dyer, and he augments their influential work through a sustained engagement with that of Brett Farmer, Sean Griffin, Arthur Knight, Ana Lopez, Adrienne McLean, Pamela Robertson Woczik, Mark Tinkcom, and Shari Roberts. Building on this high-calibre, diverse body of academic work, Incongruous Entertainment emphasises the depth and complexity inherent in the film musical genre – key sources of this genre’s ability to generate an ongoing fascination and a persistent level of inquiry. Equally, Cohan’s use of camp is founded on the term’s academic history, from an inherently political strategy as theorised by Jack Babuscio and Moe Meyer to camp’s mainstream heterosexual appropriation by the pop movement. His consideration of camp further extends to Barbara Klinger’s more recent concept of “mass camp”, a mainstream cultural practice devoid of subcultural association that laughs at “the overconventionalised” and critiques “archaic sex roles” (1). Cohan stresses that, throughout its many inceptions, camp is a dialectical concept, style and strategy which creates a tension between the culturally constructed polarities of gender and sexuality by using irony and incongruity to denaturalise these ideological constructions. Accordingly, camp is established as a very fluid and dynamic theoretical model, one befitting the musical’s complicated formal and ideological transgressions based around gender, sexuality and spectacular excess. Camp as an integral facet in a consideration of the MGM musical appears logical and imperative as a result of this blend of the musical’s genre and reception theories with those of camp.

Cohan commences his analysis with an assertion that the MGM house style – that is, mise en scène, performance, choreography, the formal relationship between number and narrative, and the construction of spectacle – was built on an ironic engagement with the incongruities of the dominant culture’s value hierarchy and systems of representation surrounding gender and sexuality, a convention shared by camp. Through the imbedded incongruities in its house style, Cohan argues that these MGM musicals were consciously acknowledging the possibility of a camp spectator watching these musicals alongside the mainstream heterosexual audience. The industrial conditions of these musicals’ productions are re-examined through a fascinating account, laden with anecdotes, of the queer identities and influences of the labour force that collaboratively produced MGM’s house style. Rather than the work of an individual director, Cohan argues that a camp style is evident across an extensive body of MGM musicals as a result of the collective contribution of MGM’s queer labour force. Aesthetically, the musical production numbers were the primary marketing point of these films; they were defined by a big-budget, heightened style that Cohan argues prioritised entertainment over narrative integration, which – along with a spectacular excess of cast and mise en scène – further contributes to these musicals’ camp signification.

Cohan suggests that a camp aesthetic in these films is produced by the tension between aggregation and integration in the MGM musical, a parallel to the dialectical tension at the centre of camp and the improbable excess of the musical numbers. This is compellingly elucidated by Cohan’s analysis of the camp aesthetic that governs the performances and star personas of MGM’s leading female stars as well as the studio’s most renowned male star, Gene Kelly. Judy Garland, designated by Cohan as the star who “best exemplifies the camp turn” (p. 133), is given the greatest attention throughout the book as Cohan re-examines her work and star persona for their camp sensibility. Cohan considers Garland the embodiment of the disruptive power of camp, through the power of her voice, the “in-between” characters she plays, her body’s resistance to MGM’s glamour-defined visual codes of femininity, and the discourses of mental illness and drug abuse that dominated accounts of her private life. Cohan’s final chapter examines the contemporary fandom that reconstructs Garland within celebrity discourses, augmenting the discourses of stardom that continue to cultivate and critique the figure of Judy Garland (2). This reinforces the irresolution of Garland’s star persona – a star is constructed through discourses of unattainability and perfection, whereas a celebrity is constructed through discourses of the everyday – which codes her with a very camp sensibility. The fan websites analysed by Cohan locate Garland as the subject of hotly contested debates centred on a need for a personal connection and absolute “knowability”. This results in a desire to fix her identity as singular and static in the face of complex layers of physical, personal and historical evidence that indicate the impossibility of this endeavour. Fans thereby revise the role of MGM production personnel who previously sought to “corset the problematic sexuality and spirited independence of her persona” (p. 134) in an attempt to divest Garland’s star persona of its disruptive “in-between” power, or at least to obscure it.

Just as innovative and rewarding as his analysis of Garland is Cohan’s consideration of the camp sensibility that codes Esther Williams, Debbie Reynolds, Ann Miller, Eleanor Powell and Lena Horne through their non-conformity to MGM’s conventions of glamour. These stars are united by their deconstruction of glamour as a masquerade, through their theatrical performances, unconventional dance styles, appearances, and roles. These features, along with a lack of suitable partners, problematised a heteronormative femininity that was defined during this period by Ziegfeld’s codes of glamour. The ongoing queer fan bases for these stars suggest this camp sensibility persists as a residual component of their personas and performances (3).

In comparison to the careful surveillance of femininity invited by MGM’s female stars, Cohan argues that Gene Kelly’s performances and star persona put MGM’s construction of masculinity under scrutiny. Cohan’s in-depth analysis of Kelly’s camp sensibility is augmented by an excellent selection of stills that add veracity to his argument. Most notable are the shots of Kelly dancing with Jerry the Mouse in a fantasy sequence from Anchors Aweigh (George Sidney, 1945). Cohan argues that the costuming, cinematography and choreography of this performance combine to code Kelly’s body with a camp eroticism. The selected stills show the segment of the dance where Kelly bounces Jerry the Mouse from one bulging bicep to the other. This staccato-like movement, within an otherwise fluid and expansive dance style, stands out as a very odd and disruptive moment within this performance. There is an ambiguous eroticism that imbues this movement with an inexpressible “not-quite-rightness”, which invariably results in nervous laughter in screenings of this film to student groups. Cohan describes this as, “Virile and sexy, his [Kelly’s] dancing has an erotic potential that disturbs the manly/effeminate antithesis imposed on it” (p. 156). This is the incongruous entertainment that Cohan argues is a product of a camp aesthetic that results from the confrontational junction of gender and sexuality and the “personification of virility” (p. 173) in Kelly’s performances and star persona. This argument compellingly accounts for the irreconcilable emotional excess generated by Kelly in his performances. The complex ability of Kelly’s persona to encompass camp as a political queer strategy and a mainstream sensibility provides the basis for the following chapter. This camp embodiment is wittily defined by Cohan as “Camp Lite” (p. 209), and is explored within the concept of Singin’ in the Rain (Stanley Donen and Gene Kelly, 1952) as “the first camp picture” (p. 199). While it is a product of the camp sensibility that defined the MGM house style, Singin’ ironically uses camp’s pivotal strategy of recycling to efface the queer referentiality that is central to the history of MGM musicals.

Cohan argues that a recognition of the MGM musical’s queer and mass camp sensibilities is used to repackage and market these films to a niche audience in the early 1990s. This is evident in the material and structure of the compilation That’s Entertainment! III (Bud Friedgen and Michael J. Sheridan, 1994) and the Turner Corporation’s repackaging of the MGM musicals for its cable network and home DVD markets. As Cohan concludes, That’s Entertainment! III recontextualises the MGM musicals by displaying entire musical numbers, now divorced from their original narrative containment. This repackaging “not only acknowledges the camp values evident in their characteristic style, but it formally licenses camp spectatorship as an authoritative interpretation and legitimate source of pleasure” (p. 271). Redefined by this contemporary marketing strategy, the history of the MGM musical is nostalgically re-written through camp discourses as a specialist product that stands outside mainstream tastes.

whether the musical “exudes” camp or camp “imitates” the musical, it follows from both observations that, if camp had not had its own historical existence as a cultural practice, the Hollywood musical would surely have had to invent it, and vice versa. (p. 42)

As Cohan advocates in his concluding comments, the film musical offers an extremely fertile area for academic investigation. Through his unique insights and academic rigour, Steven Cohan simultaneously reminds us just how spectacular film musicals and their attendant scholarship can be.