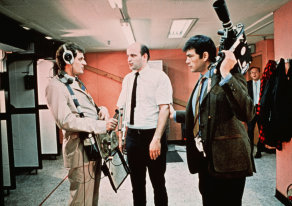 “Why are we fighting?” The conundrum that Mick Jagger addressed from the stage of the infamous Altamont concert in December 1969 may well have been the query of the age. So much unsettled and seething energy wracked the nation at this time; so little sense seemed to be made of just how to quell the fractious dislocation that arose in its wake. For the most part, the American commercial films that addressed this dilemma did so only indirectly, transferring the drama of the hour to some previous time and place (for example, Sam Peckinpah’s The Wild Bunch, 1969) or personalising the social cataclysm (for example, John Schlesinger’s Midnight Cowboy, 1969) and divorcing it from specific ideological antagonisms. The kind of overt grappling with the messiness of social change that Jean-Luc Godard and others attempted abroad was just not an option when most of the studios in Hollywood were struggling with fiscal instability and therefore feared antagonising any segment of the viewing public. Few filmmakers consequently had the opportunity or the gumption to tackle the matter head-on and investigate the systemic flaws in a society that appeared to be tottering on the brink of complete disarray.

One of the few who did was cinematographer Haskell Wexler. Known nowadays principally for his work as a cinematographer in collaboration with Hal Ashby and John Sayles, Wexler accumulated a range of notable credits during the 1960s. In the earlier portion of the decade, he established his professional reputation with a string of noteworthy efforts, including America, America (Elia Kazan, 1963), The Best Man (Franklin J. Schaffner, 1964), The Loved One (Tony Richardson, 1965), Who’s Afraid of Virginia Woolf? (Mike Nichols, 1966), and two works with Norman Jewison (In the Heat of the Night [1967] and The Thomas Crown Affair [1968]). Throughout these credits, we can observe how Wexler broke ranks with the technical glossiness of the studio system and incorporated improvisatory and documentary dynamics into his palette. (Admittedly, the latter of his two efforts with Jewison was notably, and for some irritatingly flashy, particularly in its incorporation of split-screen for the robbery sequences.) The kind of innovative expansion of mainstream imagery Wexler pioneered laid the groundwork for other cinematographers, most immediately Laszlo Kovacs and his location shooting for Easy Rider (Dennis Hopper, 1969).

Wexler had been a documentary filmmaker before and during his employment in Hollywood. He filmed the 1963 March on Washington (The Bus, 1965) and would later direct or assist on films that illuminated Jane Fonda’s trip to Vietnam (Introduction to the Enemy [Wexler, 1974]), the memories of the participants in the My Lai massacre (Interviews with My Lai Veterans [Joseph Strick, 1971], the thoughts of the Weather Underground as they hid from the government (Underground [Emile de Antonio et. al, 1976], and the ambitions of the Nicaraguan rebels as they struggled for the liberation of their country (Latino [Wexler, 1985]). Paradoxically, he received the support of Paramount Pictures not to follow along these kinds of paths, but, instead, to make a narrative feature film that adapted Jack Couffer’s 1967 novel The Concrete Wilderness, in which a photographer interacts with a young boy who hides a wild dog within the sewer system of a metropolitan city. Wexler eventually borrowed nothing more than the rough outline of the two characters for his subsequent film. In constructing a screenplay he came to the conclusion that he would shirk his social obligations if the picture didn’t reflect, if not include, the tumultuous events about him. He also wished to document the lives of the rural underclass in his native Chicago, specifically the individuals residing in the Uptown neighbourhood: a refuge for emigrants from Appalachia who hoped to escape rural poverty through urban employment. His ultimate ambition became to merge a fictional plotline with the turmoil that eventually resulted in the 1968 Democratic Convention and the riot that ensued as demonstrators were battered and beaten by Mayor Richard Daley’s constabulary. Of course, when Wexler planned to shoot his story in the city he had no advance warning of the tumult to come, and a large part of the lasting fascination of his production lays in its almost accidental collision with the unfolding of national history.

What emerged from this mix of ambitions and opportunities was the groundbreaking film Medium Cool. Wexler transformed the photographer in Couffer’s novel into a television cameraman, John Casellis (Robert Forster). The boy became Harold (Harold Blankenship), himself an emigrant from the rural South whom Wexler found on the streets of Uptown. The thin but engaging plotline Wexler concocted focused upon Casellis’ clashes with his employers over the content of his footage and the ensuing relationship with Harold’s mother, Ruth (Verna Bloom). The narrative climaxes when Harold goes missing and Ruth’s anguished search for him places her right in the middle of the Convention demonstrations. She eventually manages to locate John through his soundman, Gus (Peter Bonerz), but their collective efforts eventuate in tragedy, as though the dire energies unleashed on the streets invade their private lives.

Once Paramount viewed the finished product, they initially balked at releasing the film altogether, not only because of its political content but also for its frank incorporation of sexual imagery in the form of one of the earliest examples of full-frontal male and female nudity. It initially made only a minimal commercial impression, yet, perhaps paradoxically, has become more renowned over the course of time, leading to its 2003 inclusion in the Library of Congress’s National Film Registry. Much of the film’s critical reception has typically stressed its uniqueness within the period it was made – although one must also recognise that few filmmakers, to this day, have chosen to mimic Wexler’s dexterous use of political ideology or ambition to illustrate the rancour that lies just beneath the surface of American society. However, rather than simply parroting the predictable encomiums, it is more worthwhile to gauge how well the picture has stood the test of time and whether its value lies beyond its departure from the conventions of institutional filmmaking.

Admittedly, there are elements in Medium Cool that fall somewhat short. The kind of cinéma vérité filmmaking that was possible prior to the invention of the steadicam can test an audience’s equilibrium. Also, many of the shots in the film are composed more for the purpose of incorporating specific content than illustrating technical finesse. Wexler’s visual scheme succeeds more on the basis of its energy and audacity, and not its incorporation of memorable individual images. The flimsy plotline ties the individuals together much more than it explores, in-depth, their impulses and attitudes. Also, to some degree, the unlikelihood of the attraction between John and Ruth becomes sidetracked rather than grappled with, although the incorporation of working class characters remains one of the most compelling elements of the narrative.

Furthermore, the sexual politics now seem less acute and engaged than one might wish, although John’s exercise of his masculine prerogative mirrors most of the members of his gender at this point in time, if not currently. One wishes Wexler had the opportunity to explore more of the motivations that lie behind his seeming transformation once he encounters Ruth and Harold. The earlier sequences in the film that illustrate his seemingly altogether physical relationship with a nurse (Marianna Hill) convey the sense of someone with little sensitivity towards other people, let alone interest in the sexual independence of women.

What does retain its undeniable impact upon the viewer is the incorporation of actuality in Wexler’s footage and the systematic interrogation of the corporate-supported system of representation of public life. From the very first scene, the position of the reporter is placed front and centre before the viewer, as is their obligation to address and record the extremities apparent to them in the events they observe. We see John and Max come upon a car wreck, whose victims they film rather than assist, even though they place a call for medical backup. (This scene also prefigures the film’s climax and the ultimate victimisation of John and Ruth.) Both men go about their work calmly and seemingly without emotional engagement. The untenability of that posture is explored in the subsequent sequence, where a roomful of media professionals discuss the purported ethics of their occupation, most particularly its depiction of violence. Obviously, Wexler intends these episodes to implicate and interrogate his own posture as the film’s director, and specifically his choice not only to include images of police violence during the demonstrations but also the psychic damage wrought upon some of the characters, a number of whom were not actors but actual members of the Chicago underclass.

The other element that lingers in the mind long after the final credits have concluded is the performance of Harold Blankenship, the young local boy who plays Ruth’s son. His self-possessed dignity and obvious comfort before the camera indicates someone who exuded a clear sense of his own identity rather than some persona enforced by the strictures of the screenplay. In a 2001 documentary Look Out Haskell It’s Real: The Making of Medium Cool, it is revealed how deprived the young boy had been; the sequence in Medium Cool in which John brings Harold to his apartment and lets him use the shower was the first time the boy had encountered this technology. After the shooting schedule, he returned to Uptown and anonymity. The director of the documentary, Paul Cronin, eventually located him in his native West Virginia, and released a subsequent 2006 production, Sooner or Later, that depicts his efforts to rise above poverty and raise two sons. The scenes in Medium Cool in which Harold unleashes pigeons may be a comparatively trite metaphor for the wish for escape, yet his performance, and the film altogether, remains one of American cinema’s few efforts to illustrate the unquenchable appetite for liberation amidst the entanglements of class and the encroachment of the powers that be.