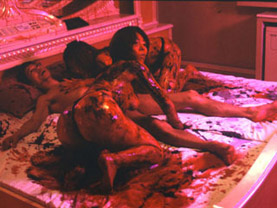 Udine’s Far East Film Festival remains a gathering place of choice for those truly serious about East and Southeast Asian cinemas: for those who really care about the cultures – right or wrong and in whichever state of willing-to-pleaseness movie-wise – instead of the clichés and the sly attempts at making something manageable which simply isn’t, or at least not in the way folks “here” would like it to be.

The FEFF – now with serious Venice inroads – is dedicated solely to popular cinema: an idea, a spectrum of diverse praxis in flux, a constant need for examination and definition. Few borders are as embattled as those between the popular and the populist.

This edition’s retrospective, the oeuvre of Hong Kong New Wave master of masters Patrick Tam Kar Ming – THANK YOU, UDINE – occasioned by his comeback-monument Fu zi (After This Our Exile), probably expressed better than anything in recent memory what popular cinema actually means when it gets serious: a willingness to search for new ideas, a lust for contradictions, a passion for genre – always helps! – above all, a belief in the audience, its willingness to find out something new about itself. Tam, again and again, has worked the rules, of genre and of Modernism, at the same time in unusual harmonies, like few others were ever able to. Fu zi, now, finally strikes the perfect balance: an echt Cantonese father-and-son-melodrama gets told in a pragmatically modernist realism – ending, consequently, in the kind of fury and despair earlier generations of Cantonese masters were afraid of: the house is not only divided, it’s razed to the ground.

For all the FEFF’s attempts at constantly re-inventing themselves and therewith all the good in popular cinema, certain things just haven’t changed over the course of now nine editions – and some just got worse. The People’s Republic of China’s State Bureau for Film and Television, for example, remains a reality to be reckoned, sometimes dealt with – which is, well, the way it is, while the production companies and world sales agents in Japan and the Republic of Korea seem to get more fickle and greedier, more neurotic and irrational by the year – not an Udine problem per se, but one which shapes the festival. It’s painful to think that whole film cultures’ representations, histories depend on some industry big shot’s whims and tempers, which is bad enough with regards to recent cinema, but gets catastrophic when film historical programs have to be put together and try as one might one can’t get the films one wants (apologies, Mark Schilling). It’s not an Udine- and not an Asia-specific problem, but it tends to get thrown here into particularly sharp relief.

But, hey!, certainly Japan, but also the Philippines (whose industry sadly delivers less and less) have astonishing independent productions which become, at least in the case of Japan, ever more important in Udine’s programming, and not to its detriment, quite the contrary. And the Republic of Korea? Well, the most interesting FEFF entries from East Asia’s biggest movie bubble (economy) – all soap – a secondhand wonder – originated in a production neverworld: too big for common indie, too small for industry, classic in a sense too few love to appreciate these days, more often than not made by older auteurs, the kind a producer-centered industry of ever more populist aspirations and an ever more totalitarian sense of prestige and fast bucks has less and less use for; it will be quite interesting to see how things develop there, once the bubble bursts, the wave breaks…

That’s another thing about Udine: it’s so much about contexts. The individual masterpiece, of which Udine has year in, year out as many on offer as, say, Cannes, is but the icing, not the cake: stock gets taken of the way these cultures develop; making the catalogue a most essential part of the festival whole: something also rare. 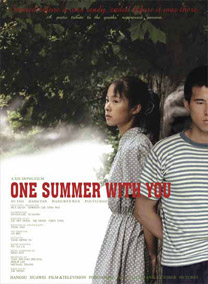 Take the People’s Republic of China: compare its FEFF entries in 2003 and 2007, and one gets a precise idea of the way the country’s image got reinvented, as well as the different, at times contradictory ideals, also markets, the films have to address if not serve these days. Take Xie Dong’s delicate, finely rendered pastoral piece of melancholia, Yu ni tong zai de xiatian (One Summer with You) as well as Chen Daming’s lovely, in every noble sense humanistic comedy of modernisation-driven changes in a small town, Ji quan bu ning (One Foot off the Ground): how both are critical of certain developments, in the past as well as the here and now, while never – overtly – challenging the status quo (and why should they?), how they find ways to reconcile modernist instincts, approaches, experiences with certain more classical realist impeti too often carelessly discarded. Or take Tang Danian’s off-kilter, positively spurious, willfully unhinged, at first a tad pony posterish, then gnarlingly existentialist Qing chun qi (Young and Clueless), the way it’s trying to express a sense of alienation in a realist idiom alien to that concept. Three of at least a half dozen mighty impressive films from PRC which alone would have made Udine ’07 worthwhile.

And look at what happened with Korea, same space of time: how ever narrower a film culture it became, hellbent to please, with an ever greater distrust in true originality, a slavish belief in plot, and a will for blinding flashiness. Just compare four of this edition’s least watchables, Yoo Ha’s Biyeolhan geori (A Dirty Carnival), Kim Tae-yong’s Gajok-ui tansaeng (Family Ties), Jang Jin’s Georukhan gyebo (Righteous Ties) and, yes, Bong Joon-ho’s aberrantly over-rated Goemul (The Host). Even the two easily best Korean films at FEFF ’07 are mired by these kinds of problems: Lee Jung-bum’s Yeolhyeol-nama (Cruel Winter Blues) is way okay – a fine character-based and -paced study of gangsters at wit’s end facing existential choices – till the screenplay cum genre rules demand their dues in the final act; while Byeon Seung-wook’s charming Sarang-hal tte iyagi-haneun geotdeul (Solace) does its very discrete directorial best – a léger fancy for the incidental and the curious – with a story set for a crowd-pleasing fuck-up de luxe – hey, taming a crowd-pleaser is no mean feat! (Same, by the way, with Thailand, another major mistake of contemporary film culture, embodied this FEFF by Wisit Sasanatieng’s terror of a movie Pen choo kab pee [The Unseeable], one of 2006’s most unwatchables).

Little, on the other hand – save for the usual political humdrum – seems to have changed over Udine’s now close to a decade of existence with Japan and Hong Kong, the festival’s twin pillars of pleasure: even if not all films from these countries deliver, they tend to form a very nice harmonious whole, just the way a real film culture should.

That said: this year Japan had only one certifiable masterpiece on offer, Imaoka Shinji’s mind-blowingly bittersweet-bizarre pink eiga Oji-san tengoku (Uncle’s Paradise) – but that alone saved! The rest was: at times delightful while indefenceably uneven, like Kaneko Shusuke’s two-part and tres shojo manga-adaptation Death Note and Death Note. The Last Name; at times uneconomically over-the-top, like Oda Issei’s enchantingly (sadly too) nutty Warau Michael (Arch Angels); at times too honne to be true, like Hasumi Eiichiro’s Limits of Love Umizaru (Umizaru 2 – Test of Trust), a 154% Japanese blockbuster which’ll leave everybody too used to Lalaland looking dumb-founded – every potential for action gets ignored in favour of long speeches in which all these good as well as all those not so bad folks just pour out their hearts!; or at times just deeply disappointing, like Shiota Akihiko’s stab at high concept with some brains, Dororo, which never really gelled, or Otani Kentaro’s adrift Nana 2 which simply got lost with its characters, the whole film is one overlong second act, with neither first nor third in sight, but nice try anyway.

And back to Imaoka, his particular genius: his loose and loopy sense of freedom, his essentially basic-surreal, everything-can-happen-NOW vision of life on earth. In the depths of his heart, he’s a happy realist of wackywacky: one of those very, very few who know how to cut from a medium close of a fake-cum-drenched real poisonous snake slivering over some stone steps to an about-wide angle shot in which the cummer is holding a real rubber snake to his dick’s whereabouts, howling like mad, dying, to be delivered – a game of paper-stone-scissors at love hotel Hell played by one’s kin with conscierge Satan does that trick. Just watch and marvel: at the ease with which Imaoka pulls that off, the kind quietness with which it all flows. 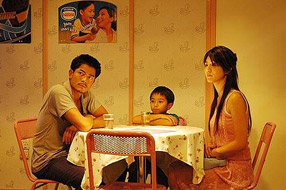 All other FEFF9 strokes of genius had their home in Hong Kong: Sing gung jok jeh sup yaht taam (Whispers and Moans) and Hak bak do (On the Edge), both by Herman Yau Lai To, Cheang Pou Soi’s Gau nga gau (Dog Bite Dog), and above all the already-mentioned Fu zi. Besides these masterpieces, Milkyway’s in-house script maestro Yau Nai Hoi’s directorial debut Gun jung (Eye in the Sky), a soul-life-safer at the Berlinale ’07 where it premiered, started to look ever more just okay.

Freedom is as much the operative word for Herman Yau Lai To as it is for Imaoka – just in a very different way and sense. While Imaoka is all about transgressions turning transcendence, Yau is extremely concerned about limits, the lines society draws, or doesn’t, the ways our life gets structured, suddenly disrupted – something the more open-minded, or keener allegory-keyed, already saw in certain of his early Category III-works (yes, folks, take another careful look at, say, the Danny Lee Sau Yin-co-directed Baat sin faan dim ji yan yuk cha siu baau [The Untold Story] from 1993). Consequently, Yau’s screenplays, even the ones for his lesser works, are shaped by social conditions, not plot point-rules, often not even plot. Character, class contradictions, capitalism, that’s what’s happening, more than ever before, maybe, in Sing gung jok jeh sup yaht taam, befitting Hong Kong’s last proletarian master’s arguably finest film yet: a non-fiction book-based narrative about ten nights and dawns, rarely days, with the sex workers of Hong Kong. Yau looks, unflinching as always, at (gender-)disequilibrii amongst the male-, female-, TV-hookers, age and its conditions, a bordello’s power structures, the animosities between Hong Kong- and Mainland-workers, a social worker’s attempt at getting the hookers organised union-wise – social security, medical benefits etc. – and, yes, love/dependencies, very needy, very greedy, very real, and not exactly romantic – all that with a calm, compassionate, never condescending seriousness, a perfect sense of pace, the intricacies of flow, its wholeness, and a cool eye for the perfect image which isn’t the most obvious but the most just. Besides this masterpiece, it’s easy and very wrong to underestimate Yau’s Hak bak do, a coarsely plucked riff on the theme of Andrew Lau Wai Keung and Alan Mak Siu Fai’s Mou gaan dou (Infernal Affairs), harsher, more driven, more concerned/angrier: a tale of Hong Kong – also its by-now ten years of trying to adjust between two worlds, systems – with an edge, lean, pared down to its aesthetic essentials all derived from the city’s textures and hues. Just brilliant.

Which could just as well be said of Cheang Pou Soi’s latest action-meditation on Hong Kong as an eternal refugee camp, a civilisation of spectres, Gau nga gau – bad cop looking for deliverance meets killing fields-born Cambodian hitman – just so way more melos-fueled, furious, pop-operatic at times: Yau is all about enlightenment through conscious-raising, Cheang about the conscious will for enlightening deliverance.