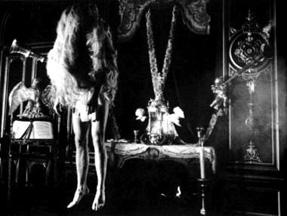 In a rare 1967 monograph, now long out of print, the Italian director Valerio Zurlini published a poetic account of an evening in the company of the great painter Balthus (Balthazar Klossowski, 1908-2001), entitled Una serata romana con Balthus (A Roman Evening with Balthus).

Six years earlier, Andre Malraux, France’s Minister for Culture, had appointed Balthus to administer the French Art Academy at the Villa Medici in Rome. The painter lived in Italy for well over a decade and, in that time, befriended a significant number of Italian directors, including Zurlini, Federico Fellini, Roberto Rossellini and Liliana Cavani. Furthermore, Balthus expressed admiration for the films of Luchino Visconti – “He was a director of extreme formal elegance, a perfectionist” – and, in turn, Visconti was enamoured of Balthus’ paintings.

What attracts filmmakers to painters and vice versa? Why these secret and not-so-secret affiliations between the two? It is not a question of direct influence, as if one could find within these filmmakers the traces of Balthus’ style (a very singular style at that). It is something more illusive and dispersed. The history of painting is for cinema a kind of pre-laboratory for experiments in lighting, colour and composition. Of course, painting and cinema are key leitmotifs of Jean-Luc Godard’s Histoire(s) du Cinema (1989-98) and the subject of his masterwork, Passion (1982).

While much film analysis – certainly in its garden-variety reviews and commentaries – still holds to literary and dramatic biases of character, narrative, plot and dramaturgy. But cinema’s richer affinities may be with such painterly attributes as lighting tones, composition, framing, colour palette and spatial configurations. It is these qualities that Zurlini speaks of when writing on Balthus, and even more so in a monograph he devoted to the works of the great Italian painter, Giorgio Morandi, entitled Il tempo di Morandi (1973). A true connoisseur, Zurlini would gift Balthus a Morandi canvas, which Balthus treasured for life.

In part, these reflections on cinema and painting are provoked by a recent viewing of Raúl Ruiz’s Klimt (2006) – and, least we forget, one of the treasures in Ruiz’s filmography is L’Hypothèse du tableau volé (Hypothesis of the Stolen Painting, 1979), a film derived from the work of Pierre Klossowski, the elder brother of Balthus. The film is not so much a biography of Gustav Klimt or an appropriation of his style to cinema – as in a standard film like Girl with a Pearl Earring (Peter Webber, 2003), with its Vermeer reproductions; better, then, to consider Jon Jost’s All the Vermeers in New York (1990) for a more intelligent exploration of the theme – but an attempt by Ruiz to subject Klimt to the phantasmagoria of cinematic illusionism: Klimt as seen through the looking-glass, as in Jean Cocteau’s cinema. More to the point, this train of thought was set in motion by the theme of cinema and painting which threads its way through much of the writing in this issue of Senses.

The lessons borrowed from painting are there in Tag Gallagher’s comment on Pedro Costa: “Costa’s portraits are stunning, conjuring Jan Vermeer in light, colour, air and use of doors”, or the same author quoting Costa citing Paul Cézanne in the Straubs’ Paul Cézanne im Gespräch mit Joachim Gasquet (1989): “We must see the fire that’s hidden in a person or in a landscape.” Costa adds: “We must strive for what Jean-Marie Straub describes: if there’s no fire in the shot, if there’s nothing burning in your shot, then it’s worthless.” (See “Straub Anti-Straub”.)

Cézanne is picked up again, with a different purpose at hand, in Peter Doebler’s illuminating discussion of the development of Robert Bresson’s style. And, again, Gallagher gets to the heart of the ‘exchanges’ between painting and cinema in his examination of the correlations between King Vidor and Andrew Wyeth (“How To Share a Hill”). Questions about the tonality of light are there, too, when Winston Wheeler Dixon discusses the differences between the celluloid and digital image.

But, as someone once commented, cinema is the bastard child of all the arts. So, let us give literature its due. Two of the articles in this issue focus on the film-literature axis: Guy Crucianelli’s excellent discussion of Bresson and Flannery O’Connor, and Tony Williams’ insightful analysis on John Buchan and Alfred Hitchcock.

Of the many excellent DVD releases of late, it would be remiss of us not to highlight the importance of Criterion’s Paul Robeson: Portraits of the Artist, for which Peter Hourigan has provided not only a review of the disc, but an excellent essay on the career and work of this important figure.

Finally, Senses of Cinema would like to welcome on board Peter Beilby as General Manager. Peter will be well known to many readers worldwide as a founding editor of the print journal Cinema Papers, a producer of significant Australian features and documentaries, an investment advisor and a media consultant to Lonely Planet. Peter steps in for the retiring Albert Fung, who contributed much to Senses during his years as Manager. Happily, Albert stays on as a Senses web designer.