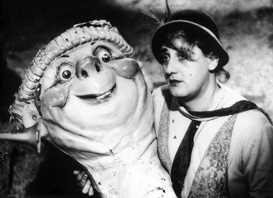 Federico Fellini made I Vitelloni before he became a cinematic institution. This is a film that crackles with rebellious energy and yet is also shot through with a sort of melancholy for Fellini’s own formation as a young artist: it marks both the central and the end point of his apprenticeship as a great filmmaker.

In his documentary Mio viaggio in Italia (2001), Martin Scorsese refers endlessly to the profound effects on his growing sensibility of neo-realist movies from Italy that he watched again and again on television and in the fleapits of his corner of New York (1). No films were to influence him more significantly and the traces of this can be found throughout his entire oeuvre. In his voiceover narration, Scorsese observes that I Vitelloni was a powerful influence on his own Mean Streets (1973). It shows.

I Vitelloni was a film made before Fellini let loose the surreal tendencies that drove his work towards a kind of cinematic magic realism after La Dolce Vita (1960). He had begun his career in movies as a writer: left-leaning (who wasn’t at that time in the post-World War II period?) and in thrall to the possibilities of neo-realism before deciding that it was a dead-end considering his more furious and poetic energies.

I Vitelloni is a film about leaving youth behind. Its opening shot focuses on a gang of young men walking arm-in-arm through a sleepy Adriatic town: ironically these confident youths look a bit like a group of fascist street toughs from Mussolini’s Italy of barely twenty years before. While its final swooping sequence (dreamlike and anything but “realist”) moves like a modern crane shot through the bedrooms of the four sleeping vitelloni that Moraldo, the only character to ultimately move away the town, leaves behind. It’s a vision of Moraldo’s escape from the confines of old friendship, and his trip to the Big Smoke.

I Vitelloni –“young bulls” or “slackers” (my translation) – is above all a story about friends mired in a seaside town. Fausto (Franco Fabrizi) is the flash Don Juan of the group, Leopoldo (Leopoldo Trieste) a wannabe playwright, Alberto (Alberto Sordi) a mummy’s boy (momoni) who lives with his mother off the wages of his sister, and Moraldo (Franco Interlenghi) is the group’s moral centre and (we guess) the voiceover narrator. Seaside towns have an intrinsic drama of their own: the revolving arrival and departure of summer visitors; the sense of young people on the edge of nostalgia and loss. For Fellini, growing up in Rimini, which is very like the (nameless) towns in I Vitelloni and Amarcord (1973), summers offered the chance to come into contact with snazzy city folk on holiday, to hear about the latest fashion, movies, or just plain gossip.

The most powerful influences on the young Fellini are less classical than those of many other writers and directors of the time. He loved Italian popular culture of the period. Cartoons, caricatures, and radio comedy were the populist art forms that brought him to the cinema as a gagman and scriptwriter. Novelist Italo Calvino also noted the influence of mass culture on Fellini’s style as a “forcing of the photographic image… from an image of caricature toward that of the visionary” (2).

For the post-war Left, a film’s critical value was mostly judged on whether it depicted Italy’s social problems and offered a socialist (ideally, Marxist) remedy. Old school directors, however anti-establishment, were labelled conservative. As a recent veteran of the scripting team responsible for two seminal works of Italian neo-realism, Roma città aperta and Paisa (Roberto Rossellini, 1945 and 1946), Fellini was well-placed and interested in moving toward a “cinema of Reconstruction”. After Paisa, he redefined his artistic credo as “looking at reality with an honest eye” (3).

Although far less overtly dreamlike than Fellini’s later work, I Vitelloni has the feeling of a daydream, of memories strung together. The backdrop for the film is the selection of “Miss Siren”, a local beauty contest that marks the official end of the summer season. These lads are obsessed with girls! Fausto attempts to avoid marrying Moraldo’s sister when he discovers she is pregnant, has a string of affairs after their marriage, and is bullied into a sort of temporary decency by the film’s end. Alberto’s sister elopes, leaving him flat broke. For his part, Moraldo hovers on the edge of his friends’ failures and, finally, he takes a dawn train to Rome, saying goodbye to home, his fellow vitelloni and, symbolically, an older, more traditional Italy.

The whole story is like a classic bildungsroman: a vision of Moraldo’s escape from the confines of old friendship and into maturity. So, when Moraldo hops on the train for the big city, it is the younger Fellini we really see, ready for the international challenges of a less regional cinema, and unafraid to try himself against the cinematic universe.

Half a century on, with Fellini’s films now viewed down the long end of the telescope, I Vitelloni seems, like its young protagonists, the first edgy stirrings of a young artist, confident, ready for anything, but also profoundly, disturbingly modern. Loosely structured and eccentrically narrated, I Vitelloni sometimes seems like an early pitch for Fellini’s “breakthrough” movie, La Dolce Vita. It is also a clear eyed snapshot of Italy in the immediate post-war period, full of references to the tidal social changes underway and a seminal film in Italian cinema: one of the first to detail the effects of technology, celebrity and mobility on Italian life (4).