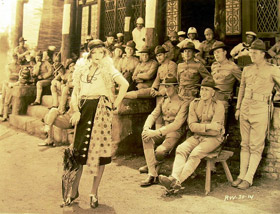 “Here’s to your health. I hope it’s bad!” toasts Sergeant Quirt, insulting his longtime adversary, Captain Flagg in Raoul Walsh’s fast-moving paean to wine, women and warfare, one of Hollywood’s top-grossing hits of the silent period. While obeying the call of their military duties in the World War I trenches, the two U.S. marines are head-butting rivals for the attentions of Charmaine, France’s most flirtatious village beauty, not to mention other select lovelies in outposts like Peking and Manila.

Though pilloried by guardians of public morality for its flagrant “display” of blistering epithets (which even unskilled lip readers can still discern today), for its merry Prohibition-defying tippling of French wine and cognac, and for its disrespectful portrayal of military behaviour (the two heroes gamble for the high card to win the heroine), What Price Glory?, when it opened in New York on 23 November 1926, won both critical and popular hosannas, aided by the popular romantic theme song “Charmaine” introduced in Erno Rapee’s synchronised musical score. According to Walsh’s not necessarily reliable memoirs, “In four weeks at New York’s Roxy Theater, What Price Glory? grossed $780,000. For the final two weeks, by public demand, it ran continuously for twenty-four hours a day”, (1) thus justifying the record $100,000 Fox paid for the rights to the already established stage hit.

Turning Quirt and Flagg into folk heroes, the film painted a flattering portrait of can-do Yanks able to get the messy fighting done on the battlefield so they can return to sparring over women (not surprisingly, marine enlistment rose after the film’s release). With its attractive idealisation of the bachelor state, the production provided a template for generations of buddy-antagonist movies (in one of many affronts, Flagg calls Quirt “the filthiest bum to ever wear a uniform. He’s worse than I am”), but also became a prototype for a movie franchise, spawning three sequels (2) as well as flatteringly numerous imitations (3).

In step with the “Roaring Twenties”, the film bows to the millions dead on Europe’s battlefields but nevertheless remains determined to have a good time (the privations of the Great Depression still lay ahead, and only then did the great pacifist films appear that burn with indignation at the destruction wrought by the war machine) (4). Meanwhile, Walsh applies the humour in both subtle and broad strokes, the former represented by the look of dawning exasperation on Quirt’s face when he realises that once again he is under the command of the stolid Flagg (5). On a broader level, Walsh shoots a tipsy motorcycle trip with a subjective camera as the vehicle zigzags wildly between trees on both sides of the road. He also turns Victor McLaglen, the beefy British ex-prizefighter and military veteran, into an effortlessly effective bruiser and a butt of humour, as when a pet spider monkey jabs him in the backside, prompting Flagg to spit beer over the mischievous simian. While the actor gamely poses as Napoleon, complete with curled forelock and bicorn hat, and generates slow burns of frustration in a running gag where Private Kiper surreptitiously blows a well-timed raspberry at the uncomprehending Flagg, McLaglen also shows subtle restraint in less clownish moments (6).

A connoisseur of male bluster in a barracks-room world, Walsh presents life as a continuum of action that is irreducible to lessons, a robust life force that values informality, breezy banter and a sense of fair play. In Tag Gallagher’s words, “Living is adventure in Walsh’s movies…. Like him, his heroes, and women too, have neither book learning nor ancestry, only themselves, youth, and infinite bravado.” (7) Indeed, in their knockabout existence, neither Quirt nor Flagg evinces any family ties whatsoever (the latter gives away his dog tag because “nobody cares about me”), so it is not surprising that they are devoted to pleasing themselves. As Peter Lloyd has suggested, “Walsh’s characters have no external reference, an aspect which limits and at the same time provides them with extraordinary density” (8).

As professional soldiers, they are diverted from time to time by combat, though Walsh neither idealises the fighting nor fetishises the weapons. For all their nose-to-nose confrontations (shot in matched profile), Quirt and Flagg mirror each other. Both men live for their furloughs and leisure time, but when ordered back into action, Flagg remarks, “When they tell you to die, you have to do it”. Quirt runs to join him, reaffirming that in the final analysis their soldierly comradeship transcends any passing romantic rivalry, pushing out Charmaine who is left to the poignant realisation that “they left and returned two times. They will not come back a third time.” Deracinated, they are fellow wanderers who, despite their high spirits, will not taste the romantic fulfillment of Walsh’s heroes in Me and My Gal (1932) and Gentleman Jim (1942), or the positive support of a loving spouse as did the eponymous Baby Face Harrington (1935).

Apart from some central dialogue scenes (and a few message-bearing speeches), the film uses remarkably few intertitles, with Walsh telling stretches of the story only through images, including several character-based flashbacks. Progressing in vignettes, the script balances an array of vivid archetypes: the jolly fat girl (who trades wine for army rations), the colourfully ethnic Jew, the brow-furrowing intellectual (who delivers the title’s pacifist message), and the vulnerable artist, the so-called Mother’s Boy (who, contrary to expectations regarding hyper-masculine narratives, is never mocked).

For their part, the women are ready, willing and available, and are usually spied from behind bending toward the lens, as is the case with the cheerful Phyllis Haver (playing Shanghai Mabel, a prototype for Walsh’s own Sadie Thompson in 1928, who earns a hearty reaction from a contingent of appreciative marines). It’s a sign of Walsh’s economy that a single shot of Quirt’s legs enclosing Shanghai Mabel’s ankles unmistakably signals their carnal familiarity. Throughout, Walsh stages ample physical byplay (9), with much feeling of muscles, and conspicuous intimacy in the moment when Flagg rolls stockings up Charmaine’s legs. Following some innuendo-laden mischief with beds and quilts, when Charmaine sees the names of other women tattooed on Flagg’s arms, she tries to bite them off.

Remarkably, the film has no real villains, not even the faceless German soldiers, and equally lacks any puritanical streak. Only Charmaine’s understandably protective father represents any sort of Victorian propriety, attempting to uphold her virtue by demanding a shotgun marriage, which Charmaine herself rejects it (“My heart, she is my own. I don’t sell her”). Instead, she is allowed to choose which of the two rivals she wants, and her choice is respected (10).

Usually credited with making the war a safe subject at the box office again, after an exhausted public had turned away from Hun rape and atrocity dramas, King Vidor’s The Big Parade, adapted from another story by Laurence Stallings, had opened to resounding success almost one year earlier on 19 November 1925. Tellingly, unlike the battle scenes in Vidor’s film, Walsh’s two war sequences in What Price Glory? are constructed not as tests of character or Darwinian struggles or strategic moves, but simply as everyday work, however dangerous. While Quirt and Flagg are sympathetic to the raw deal awaiting the newly arrived “cannon fodder” recruits (Flagg says, “There’s something rotten about a world that’s got to be wet down every thirty years with the blood of boys like those”), when the bugle sounds they obey (“like a religion”) because that’s their job.

As a counterpoint to the continuous rough-house levity, the first battlefield sequence takes place mostly in daylight, a three-minute montage that begins with rattling machine guns and advancing tanks, proceeds to hand-to-hand combat, and draws back to view distant majestic plumes of explosions, ending with burials of the corpses (indeed, one man was reportedly killed during filming). Later, the second battle is presented as a “rain of blood and steel”, a 15-minute fully-fledged night-time attack, dynamically staged and lit by multiple explosions; though it’s less a coherent battle scene than an impressionistic blur of incidents along with a pause for regrouping. Starting from an impressive long tracking shot above the trenches, the camera pulls far back and rises to display a nightmarish wasteland, spectacularly expanding the field of vision but also distancing the characters (where Vidor’s doughboys were scared to death as they marched into gunfire in The Big Parade, Walsh’s are largely lost in the dramatic sweep). The most striking shot shows how the walls of a trench suddenly collapse, burying the soldiers so that only their bayonet points survive above the earth (John Ford’s Pilgrimage in 1933 devised an especially arresting variation on this shot).

Though meticulous about outward details (“a Marine barber ensured that the actors sported the proper haircuts for each of the film’s locales: China, the Philippines, and France” [11]), the film has been criticised for betraying the play’s inherent bitterness by emphasising the heroes’ boisterous high jinks. Walsh directs with typical gusto, rarely segueing smoothly from buffoonery to sacrifice, from battlefield realism to pat pacifist sentiments – not least during an underground death scene followed by the big anti-war indictment that ends with the titlecard, “What price glory now?” For Jean-Pierre Coursodon, “the title speech comes across as a ludicrously melodramatic intrusion instead of the climactic moment of stirring pathos it was intended to be” (12). If the script’s anger seems secondary to Walsh’s breezy horseplay, the subsequent image of Charmaine praying at the rifle-and-helmet grave of the Mother’s Boy, where she buries his mother’s last letter, transmits the emotion eloquently without expending a single word (13).