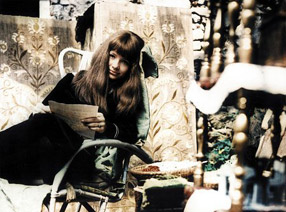 Poetism seeks to turn life into a magnificent entertainment, an eccentric carnival, a harlequinade of feeling and imagination, an intoxicating film track, a marvellous kaleidoscope.

Artists often turn to fantasy when the truth is too ugly to tell. In 1968, the creative and social freedoms of the “Prague Spring” were crushed under Soviet tanks. The occupation of Czechoslovakia, and the period of “normalisation” that followed, put an end to the liberal reforms of the 1960s – years in which President Alexander Dubcek had fought for “the widest possible democratisation of the entire socio-political system” (2), and films of the Czechoslovakian New Wave had been hailed worldwide for their boldly radical aesthetic. When the clampdown came, most of the New Wave directors had to choose between an uncertain future abroad (Milos Forman, Ivan Passer) or a spell of enforced silence at home (Vera Chytilová, Jan Nemec). Those few who continued to work could do so only in that most oblique and elusive of genres – the fairy-tale fantasy.

The cinema of Czechoslovakia in the 1970s bears a strong resemblance to that of France under the Nazi Occupation. Just as the key French films of the early 1940s fall under the banner of “escapist fantasy” (think of La Nuit fantastique [Marcel L’Herbier, 1942], L’Eternel Retour [Jean Delannoy, 1943] or Les Visiteurs du soir and Les Enfants du paradis [Marcel Carne, 1942 and 1944]) so the notable Czech films of the “normalisation” years evoke fantastic and wondrous events in a far-off (and safely non-political) past. Chief among these are Juraj Herz’s Petrolevoje lampy/Oil Lamps (1971) and Morgiana (1972), and Jaromil Jires’ Valerie and Her Week of Wonders. Although such films seemed innocuous enough on paper to get past strict Soviet-controlled censorship, each would prove to be “an embarrassment to official policies” (3) once it was finally released.

With Jires, at least, the censors should have known they were in for a rough ride. This young director had become a star of the New Wave with his very first feature Krik/The Cry (1963) but had spent much of the 1960s working on projects that failed to get official approval. His only other feature, Zert/The Joke (1968), was based on a novel by the exiled writer Milan Kundera. Hailed by one Western critic as “possibly the most shattering indictment of totalitarianism to come out of a Communist country” (4), this film was promptly banned by the new pro-Soviet regime.

Yet Valerie was a safe enough project, or so it seemed. Its source was a surrealist fairy-tale written in 1935 by Vitezslav Nezval, leader of the Poetist movement of the 1920s and a prominent pre-World War II communist. (Nezval was also a pioneer of the early Czech cinema, scripting such classics as Erotikon [1929] and Ze soboty na nedeli/From Saturday to Sunday [1931] for director Gustav Machaty.) This story, set in an idyllic village circa 1900, concerns a 13-year-old girl who begins to menstruate – and is plagued by dreams of vampires and witches, with a frisson of possible incest and soft-core lesbian desire. Not a fairy-tale as Disney would have it, but hardly a threat to the stability of the workers’ state.

Or so the communist censors might think. In an irony that young Czechs could not fail to notice, the vampire curse that haunts Valerie’s family is the legacy of an older generation that is irredeemably compromised by its traffic with dark forces – hypocritical, mendacious and corrupt. Hiding behind a mask of piety and good works, Valerie’s grandmother restores her youth and beauty by feeding off the blood of young men and women. Her vampiric lover is, by turns, a Bishop, a Constable and a blood-sucking demon named Tchor (Weasel) – in short, an embodiment of brutal and corrupt authority in all its forms. In its equation of socio-political power with vampiric old age, Valerie is a companion piece to Aldo Lado’s brilliant giallo fantasy La corta notte delle bambole di vetro/Short Night of the Glass Dolls (1971) which was shot in Prague a year later. Here, too, an aged elite prolongs its youth and power by feasting on the beautiful, innocent young.

Doing his best to defend Valerie against the rottenness of her elders is Orlik (Eaglet), a handsome youth who is at once her suitor and (although we are never quite sure of this) her long-lost half-brother. A creative rebel in a society that is in thrall to destruction and death, Orlik is “an actor, artist, poet and minstrel, who sends her notes in magic writing and coloured inks, and sings her to sleep” (5). It is he who steals, but then returns, Valerie’s pair of magical pearl earrings. A fairy-tale talisman analogous to Dorothy’s ruby red slippers in The Wizard of Oz (Victor Fleming, 1939), the pearls have a mystical power to deliver her from evil in its various guises – such as when the vampires try to drink her blood, or a lecherous monk, whose advances she has spurned, has her burned at the stake as a witch.

Missing entirely from the story (at least until the very end) are Valerie’s mother and father. Shocked by her daughter’s liaison with a mere woodcutter, Valerie’s grandmother had the couple sent far away, forbidding them to return “until horses carry them back of their own accord”. Valerie’s long-lost parents are evocative, perhaps, of a whole generation of artists, politicians and intellectuals who, at the time the film was shot, had been banished from Czechoslovakia indefinitely – leaving the youth of the country in a state of confusion and moral paralysis. It is the return of the parents, rather than any decisive victory of Good over Evil, which frees Valerie from her nightmares, allowing what passes for a fairy-tale “happy ending”.

In a visual and aural extravaganza that makes Ken Russell look like Ken Loach, the “light” and “dark” characters of the film join together in awakening Valerie from her long and terrifying sleep. Here, at long last, is that strange and wondrous “eccentric carnival” that the Czech Poetists of the 1920s felt was the aim of all true art. Eschewing the Manichean simplicity of a Hollywood fairy-tale à la Disney, Jires celebrates not the triumph of Light over Darkness but a sophisticated blending of the two. As Marie-Louise von Franz wrote in her pioneering study Shadow and Evil in Fairy Tales, “Both black and white may be positive or negative, as the case may be. The two must complement and balance each other, like night and day, rain and sun…. Black and white fertilise each other.” (6)

At the close of Valerie and Her Week of Wonders, Jaromil Jires offers a vision that – to a Czech public in 1970, still shivering from the latest blast of the Cold War – must have seemed an impossible dream. One that, even today, gives the film a far deeper resonance than other fairy-tales of adolescent girlhood such as The Company of Wolves (Neil Jordan, 1984) or Innocence (Lucile Hadzihalilovic, 2004). His film speaks not for one girl but for a whole country. A country that may one day, after much agony, learn to live with its own nightmares.