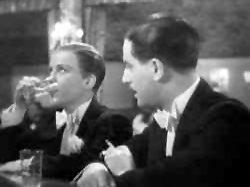 Not widely seen, Viktor und Viktoria (1933) is now known, if known at all, as the source of Blake Edwards’ remake, Victor/Victoria (1982), a genially edgy Julie Andrews vehicle (later adapted to the Broadway stage); more on this later. (1) On its own merits, Viktor und Viktoria stands as a remarkable example of late Weimar popular cinema and easily takes its place alongside contemporary Hollywood work by Ernst Lubitsch, and, later in the decade, that of Mitchell Leisen, Gregory LaCava, and the architects of the Fred Astaire-Ginger Rogers comedies of manner – not to mention George Cukor’s Sylvia Scarlett (1935) with its parallel plot mechanism.

1933 was a pivotal year for Germany: the end of the Weimar Republic (established 1919) and the beginning of Hitler’s ascension. (2) Julian Petley sees it as the year of the shift from a cinema oligopoly to a state monopoly (3); David Stewart Hull names it as the beginning of Goebbels’ systematic subversion of German cinema. (4) Viktor und Viktoria marks the end of a short window: Weimar leftist intellectuals were generally unsympathetic to cinema, certainly to popular cinema; despite this, the introduction of sound at the end of the 1920s led to a rise in entertainment genres, particularly comedies, operetta films and musicals drawing on Hollywood models and German theatrical traditions. Viktor und Viktoria gave this brief cycle a strong send-off: it was the #1 German box-office hit of 1933. (5) (With the sort of wit Billy Wilder brought with him to Hollywood, the puffed-up impresario, who promises ‘Viktoria’ he’ll make ‘him’ famous if he’ll just sign on the dotted line, boasts “I’m as safe as the Weimar Republic!”)

Veteran ham thespian Viktor Hempel (between engagements: nothing worthy of his talents has come his way lately) meets Susanne Lohr (Renata Müller), an innocent trying to break into show business. He becomes her protector and when, due to a cold, he is unable to perform his cabaret drag act, dragoons her into filling in for him, initiating the screwball premise: that she must pretend to be ‘Viktor’ off-stage as well as on (the act’s big finish is ‘Viktoria’ removing ‘her’ wig to reveal that she is actually Viktor). Susanne is a smash in Viktor’s “Lady of Seville” number, largely because she capitalizes on her mistakes. An impresario sees the act and signs ‘Viktor,’ promising fame and wealth, which quickly transpire in an elegant double-exposure montage of exotic cities, theatres, and Viktoria spelled out in lights over and over. Susanne has her doubts, but Viktor explains: “How far did you get as a girl? But as a man, they want you madly.” The toast of the town in London, the act is seen by toffs Sir Douglas Sheffield, the object of his affection, Elinor, and the Don Juan of London, Robert, with whom she is flirting. All three fall for Viktoria, but Robert (soon to become Anton Walbrook) is the one to watch. (6) After appropriate Feydeau shtick, Robert overhears a conversation between Viktor and Susanne revealing her secret. Not letting on (of course), he offers to show “Viktor” around London, resulting in a cheerfully sadistic (and covert) courtship – the sort of sexual antagonism at the center of screwball comedy, here in a relatively benign and innocent form, but moving right along toward its darker incarnations in coming years. This involves such male initiation rituals as having to smoke (when you don’t), having to drink (more than you want), going to a rough trade pub where, as gents, they both flirt with (female, of course) prostitutes and have to brawl their way out; and most personally, the next morning, as Robert fingers ‘Viktor’s’ smooth jaw-line, a barbershop shave.

Success is not achieved without resentments. The vice squad arrive backstage just before ‘Viktoria’s’ big finale, a reprise of the “Lady of Seville” number: the accusation is that Viktor is not a man but – a woman. The vice dicks close the dressing-room door (a la Lubitsch) and re-emerge quite irritated: of course he is a man. And so, as Robert and Susanne go into a closure clinch in the wings, Viktor finally gets to reclaim his act and, making the most of the comedy of his mishaps and gaffes, becomes a big hit – signed up to become famous himself.

I’ve left a lot out – wonderful gags, bits of business, classic farce set-ups of mistaken identity and gender – all presented with the élan of 1930s comedies with Edward Everett Horton and Helen Broderick as the second line. Schünzle (7) glories in the algebra of familiar devices. (8) I haven’t mentioned that this is a film about sound. Some German films of the period have figured prominently in scholarship about film sound: Der Blaue Engel (The Blue Angel, Josef von Sternberg, 1930), in Noël Burch’s Theory of Film Practice (9); and M (Fritz Lang, 1931) and Kameradschaft (G.W. Pabst, 1931) in Noël Carroll’s “Lang, Pabst and Sound,” both classic studies. (10) Viktor und Viktoria should join these standard examples along with other German popular films of the period, such as Ludwig Berger’s Ich bei Tag und Du bei Nacht (Me By Day and You By Night, 1932). (11) Viktor und Viktoria is not simply a musical (as Edwards’ film is) but a film totally built around the rhythm of speech and music: the entire film is in blank verse, rhyme, sprechgesang, or outright song, not metronomically (as were some experiments by King Vidor and Rouben Mamoulian), but through the flexible pulse of speech, music, camera movement, blocking of actors, and cutting.

One can see why Edwards remade this film. (12) Schünzle’s film is available for psychoanalytical/gender/sexuality/queer readings, but in its gracefully prim (things we don’t talk about) way, extends no invitations. Edwards, of course, being Edwards, goes for the throat, 1982 offering more latitude than 1933 – Edwards wanting to make a much more confronting film than Schünzle. It is surprising how much of Viktor und Viktoria Edwards kept/took for his remake. See them both.