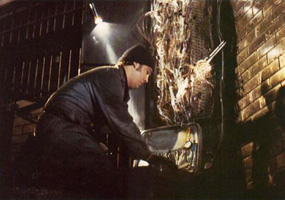 Thief may appear to be Michael Mann’s debut feature, but its cold assurance is not accidental. From the time the Chicago native left the London International Film School at the end of the 1960s, he had worked as a documentarian for ABC news, shot commercials, written series television high and low (Police Story, Starsky and Hutch) and completed the ur-feature, The Jericho Mile (1979), an extremely well-received made-for-TV film about a prison inmate who trains for the Olympics. The Jericho Mile was released theatrically outside the US and attracted the attention of James Caan, who along with his brother, Ronnie, was looking for projects to produce.

Financed by a United Artists reeling from the highly public failure of Heaven’s Gate (Michael Cimino, 1980), a strong argument can be made that Thief represents one of the last embers of 70s New Hollywood expressionism. 1981 was a record year for auteur-driven studio films going into general release and generally being neglected by audiences and maligned by mainstream critics. Joining such films as Wolfen (Michael Wadleigh), Excalibur (John Boorman), Cutter’s Way/Cutter and Bone (Ivan Passer), the film version of Pennies From Heaven (Herbert Ross), Reds (Warren Beatty) and Prince of the City (Sidney Lumet), Thief was part of a dying counterpoint to a growing audience and studio preference for genre oriented and high concept fare such as Raiders of the Lost Ark (Steven Spielberg), Arthur (Steve Gordon) and sequels like the Halloween and Friday The 13th series. At the same time, Caan’s star power, which was primarily due to his role as Sonny Corleone in The Godfather (Francis Ford Coppola, 1972), was diminishing due to Caan’s own disillusionment with acting, a distaste for most of the scripts offered to him and his quixotic decision to pursue a career as a professional rodeo rider for several years. Turning down offers to be in films like Kramer vs. Kramer (Robert Benton, 1979) and Apocalypse Now (Francis Ford Coppola, 1979), Caan’s choices in the seventies were both inspired – The Gambler (Karel Reisz, 1974), Slither (Howard Zieff, 1973) and The Killer Elite (Sam Peckinpah, 1975) – if not exactly popular, or indifferent and cynical – Harry and Walter Go To New York (Mark Rydell, 1976), Rollerball (Norman Jewison, 1975) and the highly lucrative, multi-star blockbuster, A Bridge Too Far (Richard Attenborough, 1977).

Caan’s performance in Mann’s film as Frank, the conflicted diamond thief and safecracker, is arguably his finest achievement. The actor is in perfect sync with Mann’s ongoing exploration of reluctant loners who attempt to use a skill or gift to transcend grim reality. Set in a modern Chicago where it is hard to tell whether the lawyers, police and courts are more corrupt and evil than the criminals, Frank rigidly divides his time between running a legitimate used car dealership and successfully moonlighting as a high-end diamond thief for hire. Along with two loyal accomplices, Frank, who learnt his trade from the fatherly Okla (Willie Nelson) while in prison, has carefully pulled off jobs where he can see all the angles. After successfully delivering a big haul of diamonds to his regular fence, things go awry when the latter is found dead. In a tense stand off with a middleman, Frank negotiates the return of his cut. He gets his money back from Leo (Robert Prosky), a seemingly avuncular crime boss who wants Frank to be part of his national team and pull off jobs almost like a salaried executive.

Frank, tragically, has other plans. He wants to go completely legit having met a woman, Jessie (Tuesday Weld), a waitress who once acted as a drug mule for her coke dealing boyfriend, and who seeks a just-out-of-reach dream of a child and life in the suburbs. In order to finance this dream, Frank agrees to perform one big job for Leo. That job is depicted with the almost journalistic attention to detail Mann has become renowned for. It involves Frank and his team breaking through the elevator shaft of a skyscraper and then using a specially designed torch to drill into the dense steel walls of a special safe. The job is pulled off according to plan, but it is Frank’s assessment of Leo that is faulty.

The last act of Thief is deterministic in the extreme. Frank is reduced to the kill or be killed instincts that got him through prison, but the price of survival is the absolute obliteration of any hope of a normal life. Some critics (Pauline Kael in particular) found the nihilistic denouement over stylised, but it is clear that Frank is seeking the only justice he can understand in an urban America where everyone expects their cut.

Mann successfully creates a moral universe where day and night are indistinguishable. The only strain of true virtue in the film is the sheer craft with which Frank breaks into various safes and security systems. Although Frank doesn’t seem so bad in a city where judges negotiate bribes via coy hand gestures in full view of the public, where a well lit office of white-collar workers is merely a front for a near Hitlerian crime boss, or where police detectives willingly derail an undercover investigation in exchange for a share of crime’s spoils, he embraces the corruption in order to adopt a child for his new wife. It is a testament to Mann’s understanding of the ethical stakes in Thief that the baby (barely glimpsed in a few scenes) and its future will not be easily forgotten when the credits roll.

The underwhelming critical and box office performance of Thief, as well as his subsequent The Keep (1983), ultimately led Mann back to television for a good part of the 1980s. He would successfully use his role as creator and executive producer of Miami Vice, the TV series, to further embellish his studies of professional lawmen and criminals who obsess over their work to compensate for the emptiness in the rest of their lives and their disgust at the world around them. That bleak vision continues to be found in Mann’s later feature films, especially Heat (1995) and Miami Vice (2006), but the director also understands the need for idealism and the catharsis of victory. The seeds of hope that are spoiled in Thief take on spectacular bloom in The Insider (1999) and Ali (2001). What Mann’s debut so demonstrably shows is that Mann, like Frank, is an artist, with a distinct difference – Mann’s obsession to be the complete filmmaker is rooted in a complex understanding that to be a man in the fullest sense, one cannot simply act in a vacuum.